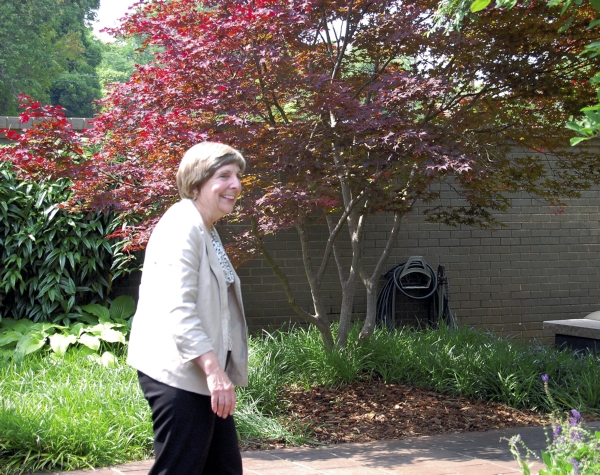 Lynn Raker, an urban design planner with the city of Salisbury for 20 years, is retiring. She said she will continue to work privately with the city to finish up and coordinate a few projects. Amanda Raymond/Salisbury Post

SALISBURY — Lynn Raker, urban design planner for Salisbury, said she has experienced a packed 20 years, full of projects and friends.

Many of those friends gathered for Raker’s retirement party on Thursday.

Raker said it was an “out of body experience” to think about retiring after 20 years.

She has been a part of many beautification and landscaping projects, including working on walkways, lighting, creative spaces and small area designs, for the city. She has also worked on façade grants, started the Public Art Program and coordinated the Salisbury Sculpture Show. She was one of the organizers and main staff coordinators of the BlockWork program, which brings together residents and volunteers to clean up and beautify a block in the city every year. In its first year, the program won a USA Weekend Make A Difference Day award and won a $10,000 prize.

Raker is also the secretary for the LandTrust for Central North Carolina’s board of directors.

Back in March, Raker was one of the recipients of a Main Street Champion Award.

Raker said one of the projects that she thinks meant the most to the city was the work she did at exit 76 of Interstate 85. She said she had to lobby the North Carolina Department of Transportation to enhance the landscaping in the area.

“It could have been very desolate down there,” she said.

Many of Raker’s co-workers and old friends came to celebrate Raker’s retirement.

Judy Kandl got to know Raker from the commissions they served on together. She said Raker was a “remarkable” person with a lot of creativity.

“I don’t think one person will be able to replace her,” she said.

Shenoah Drakeford was a classmate of Raker’s during the City Manager Leadership Academy.

“She’s always been a sweet, upbeat type of person,” she said, adding that Raker was very dedicated to Salisbury.

Fern Blair works in the communications department for the city and worked with Raker during the sculpture show. She said Raker made the look of the city something citizens could take pride in.

Claire Karriker used to work in the office right across from Raker.

“If you put her in any project, she gives 100 percent of herself,” she said. She said Raker is the type of person who knew what she was doing but was also not afraid to ask questions about things that she didn’t know about.

Joe Morris met Raker when he managed the landscape division for the city. He said Raker was able to use all of her skills to “create the beautiful picture she had for Salisbury.”

“She was a wonderful asset to Salisbury,” he said.

Susan Kluttz, N.C. Secretary of Natural and Cultural Resources and former mayor of Salisbury, reminisced with Raker about all of her different projects.

“I don’t know anyone who’s done more for the appearance of Salisbury,” she said.

“I think that Lynn is one of our treasures in our community,” she said. She could not help but boast of Raker’s work with the parking and landscaping for City Hall, median landscaping projects and her work with the Bell Tower Park. She said she had a great amount of professional admiration and respect for the work Raker has done.

Raker will be moving to Asheville to be closer to her son and grandchildren. She plans to continue doing private work and consulting, including working with Salisbury on the Dixonville cemetery project. She is also finishing up a project to install flagpoles in front of City Hall.

Raker said her ability to interact with the citizens to beautify and enhance the city was what was most important to her.

“The opportunity to work with the community closely … is probably what meant the most,” she said.