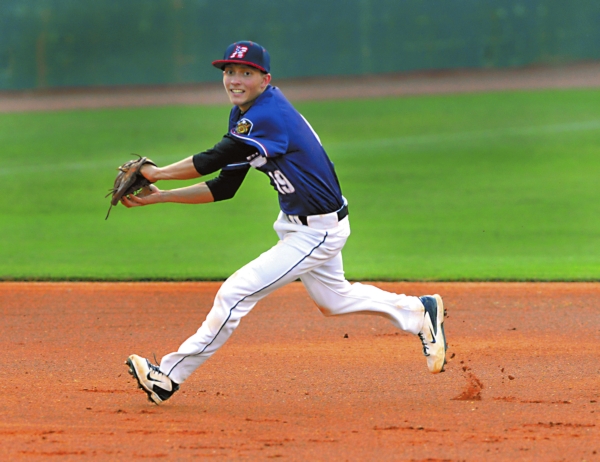 The Rowan County American Legion right-hander worked with visible confidence in briskly played 5-0 victory against visiting Hickory. He allowed just two singles in six innings as the locals squared their early-season record at 2-2.

“This is the way I want to pitch,” Strickland said. “I didn’t have many strikeouts, but the defense played well behind me. I think it shows we’ve got some pitching on this team. It’s just a matter of finding the right guys and putting them in the right situations.”

Rowan had allowed 22 runs in its previous two games, so this was a striking contrast. Strickland fanned three, walked none and faced only 22 batters.

“Tonight, especially at the top of the order, he pitched inside to them,” said coach Seth Graham, who is filling in for head coach Jim Gantt. “You could tell they weren’t comfortable when the ball was on the inner half. You could read their facial expressions.”

“A lot of times (Strickland) would throw backwards,” Beard said after Hickory (2-1) suffered its first loss. “He didn’t really have any tendencies. Fastball counts, he’d throw a curve. That made him good.”

Pritchard said it was all part of the plan. “We threw a lot of breaking balls for strikes,” he said. “In high school, you tend to throw more fastballs, but in Legion, we try to get ahead and get people out with the curve. He was very efficient. The coaches have had our starters on 60-pitch limits and he got through six innings.”

While Strickland and Pritchard were pitching to contact, Rowan’s offense provided enough support to make it look easy. Outfielder Lee Poteat delivered a two-out, two-run single to open the scoring against Post 48 southpaw Baylor Pait in the last of the fourth inning. He was chased in the sixth when he ran into double trouble — yielding consecutive two-baggers to Dalton Lankford, Hunter Shepherd and Juan Garcia — as the lead bulged to 4-0.

Rowan capped its scoring an inning later against reliever Walker Hanvey when Chandler Blackwelder grounded a two-out single to right, took second on a wild pitch and crossed on Lankford’s base hit to left.

“We got off to a little bit of a slow start,” said Strickland, noting that Pait retired nine of Rowan’s first 10 hitters. “Right after that, the bats came alive. Our hitting is fantastic, or it has been so far.”

Hickory, meanwhile, managed only three hits — including the whistling, line-drive double pinch-hitter Caleb Lutiens struck against Rowan’s Bryan Ketchie in the seventh. “We just couldn’t get that big hit,” said Beard, a Catawba graduate. “We got caught in a tough play (in the Rowan fourth), when the first-baseman’s foot came off the bag. The next pitch went for a two-run single.”

Three Hickory runners reached third base, but none it made it home. Credit Rowan’s battery for that.

“Really, it was Pritchard behind the plate calling my pitches,” Strickland said. “He helped me hit my spots and throw the right pitch when I needed to.”

All of which left Graham wearing a relaxed, post-game smile.

NOTES: Gantt is doing duty at the NCAA Division II World Series in Cary this weekend. He’ll return to the Rowan dugout on Tuesday. … Ketchie retired nine of the 10 batters he faced, including the last eight, to earn a save. … Lankford reached base four times, scored a run and drove in one. Shepherd went 2-for-3, scored twice and double home a run. … Rowan will play two games in today’s Spring Fling at Northwest Cabarrus High School. It meets Cherryville at 3 p.m. and High Point at 6.