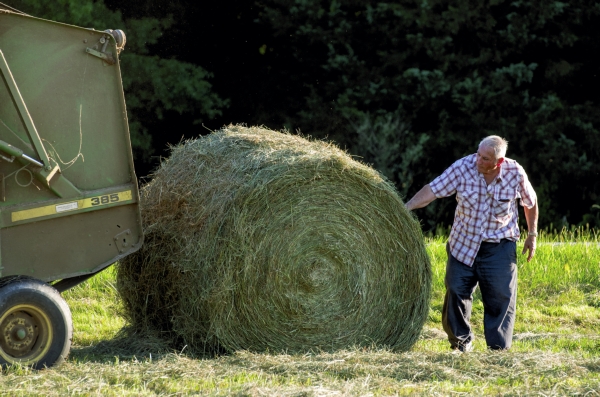 Making hay while the sun shines

WOODLEAF – Tuesday was a beautiful, bright and sunny day, perfect for baling hay. “A hard working man who lives off the land” are the words Harold Watson used to describe his friend, Louis Snider, 77, who has been baling hay for the past 65 years. Growing up on a farm, Snider began baling hay as a 12-year-old, and it’s still one of his favorite things to do. He owns 72 acres of land and leases 15 acres. Unfortunately, about eight weeks ago, Snider had five herniated discs flare up in his back, causing extreme pain all the way down to his feet. So as badly as Snider wanted to be in the tractor baling the hay this week, he was physically unable to. A friend of Snider’s, William Coleman, owner of Carolina Construction Services, was in need of some hay and worked out a deal to help bale Snider’s hay for one third of the crop. Tuesday was Coleman’s first time baling hay, so it was a bit of a learning process, but the men worked through it. Snider keeps some of the bales of hay for his cows and sells the rest to friends and neighbors. Snider hopes the doctors will be able to figure out a solution for his back so he can jump back in the tractor and mow and bale his own hay for another two or three years.

By Rebecca Rider rebecca.rider@salisburypost.com ROCKWELL — The sidewalk in front of Shive Elementary was packed with kids Tuesday morning. The students... read more