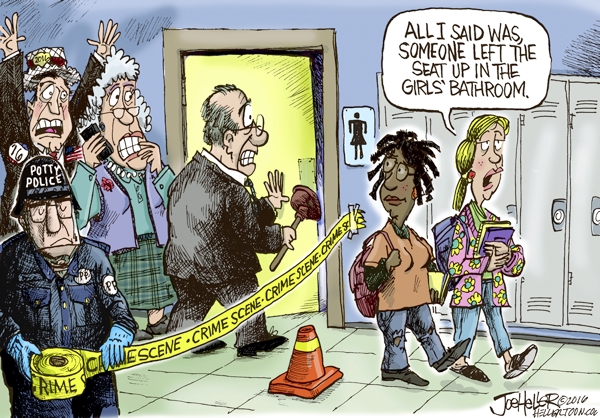 Subject: HB2.  How stupid can any law be? And how about the politicians that made it? While complying with this stupid law, here are two examples that could very well happen.

Scenario 1: My wife is in a public restroom fixing her hair or makeup. In walks a person wearing blue jeans, a flannel shirt, baseball cap and beard and with a deep voice asks, “How are you today, ma’am?” My wife takes one look, runs out and tells an officer that there is a man in the ladies room. The officer nails this person, and she has to pull down her pants to prove that she is female and complying with the law.

Scenario 2:  I am standing at a urinal relieving myself. In walks a good-looking young woman with long hair, high-heel shoes, stockings and a dress. She stands at the next urinal, pulls up her dress and relieves himself, and in a female voice states, “It’s a nice day, sir.” I am embarrassed and don’t know what to say, except stupid law and stupid lawmakers. The old law has been working since time began. Why change it?

As for perverts, it is against the law to harass or assault any person anywhere for any reason.

As a professor of communication for 41 years with three years of course work in educational leadership in curriculum and instruction, I am vitally interested in all aspects of educational policy. It is from that perspective that I write this open letter to school board members in opposition to their recent vote to allow pepper spray and personal shavers at school.

Your responsibility is to adopt policies that promote the safety and well-being of students. Your decision to allow students to have pepper spray on campus not only fails to advance that goal, it is counter- productive.

It is a simple matter of mathematical probability. The more of a product that can disarm and disable another person there is on a campus, the greater the chances that it will be used — and misused. The statement that pepper spray is purely “a defensive weapon” is naive and flawed. Any weapon that can be used to defend can also be used to attack and subdue someone else in instances of assault or rape.

It is a given that high school students lack maturity of judgment and impulse control. It is also a fact that conflicts arise and tempers flare on campus. To reduce the negative consequences of campus conflicts, the board should be extending prohibitions on weapons rather than removing them.

You have made a monumental mistake and should take immediate action to repeal the pepper spray policy. Failure to do so could result in your shared culpability in any harm that comes to students as a result of your action.

As far as permitting personal razors at school, one can only ask why on earth should students be shaving at school? There are many activities students need to do at school: listening, learning, reading, researching, discussing, etc. Shaving isn’t one of them.

Editor’s note: The school board has rescinded its vote to allow defensive sprays.

I think it is time to address the squirrel problem in Landis.

They have destroyed my thermostat, chewed a wire to the security system and made a hole to crawl inside. A carpenter was hired to repair the hole, technicians to fix the other problems. Costly!

Wanted to send them a bill for damages but was not able to find a permanent address.

It is not that I dislike animals, because I do like them. It is just the fact I don’t need these creatures. They can’t be taught to leave things alone.

Help! Move the squirrels out of Landis. Any suggestions?

Letters endorsing candidates in the June 7 primary should be received in the Post newsroom by 5 p.m. June 2 to be published before the primary.