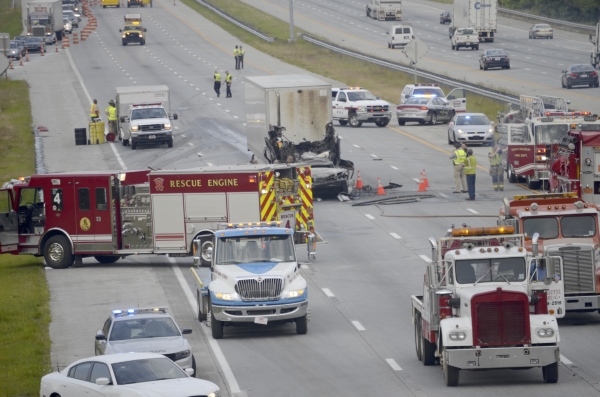 A woman was killed early Thursday morning after she got out of her disabled car on I-85 northbound near exit 74 at Julian Road and a tractor trailer struck her and her car. Both vehicles caught fire. Shavonne Walker/Salisbury Post

SALISBURY — A woman was killed early Thursday after her vehicle broke down on Interstate 85 and she was struck by a tractor trailer.

According to Master Trooper Ned Moultrie, the woman was driving northbound near exit 74 at Julian Road around 5:15 a.m. when her vehicle broke down and stopped in the roadway. The car, a Buick, came to rest in the second lane closest to the right shoulder lane.

At some point, the driver got out of the car and was standing to the left of it when a tractor-trailer, also traveling north, struck the back of the vehicle and hit the woman.

The woman was thrown, came to rest in the far left lane and died at the scene. The tractor-trailer and car traveled several hundred feet and came to rest. Moultrie said the vehicles ignited.

The tractor-trailer driver, Ivan Milosavjevic, 31, got out and was unharmed. Moultrie said troopers remained on the scene late Thursday morning investigating the crash.

The trooper advised any motorist whose vehicle is coming to a stop on the highway to try to move the vehicle off the roadway to the shoulder and contact emergency personnel or the Highway Patrol.

“Don’t exit the vehicle on the interstate,” he said.

Traffic was still backed up because of the accident just after lunchtime. Motorists were detoured to exit 74 to Julian Road and onto South Jake Alexander Boulevard, then back onto I-85.

Troopers will consult with Rowan District Attorney’s Office to discuss whether charges will be filed, Moultrie said.

By Shavonne Walker shavonne.walker@salisburypost.com SALISBURY — Neighbors and friends say a Salisbury woman who was killed during a home invasion... read more