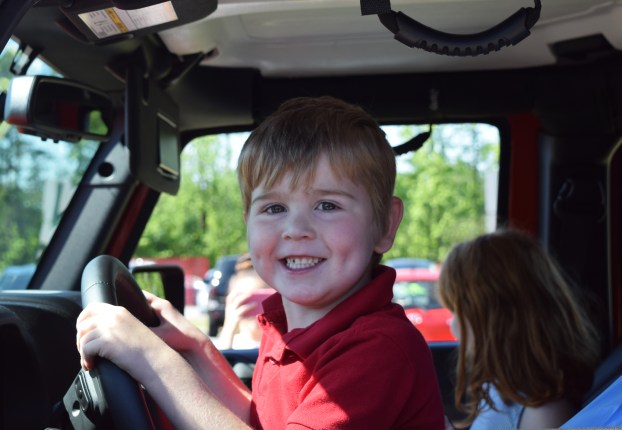 Ethan Moore, 5, sits behind the wheel of a Jeep after learning that Make-A-Wish would send him to Disney World. Ethan was born with hypoplastic left heart syndrome, a condition where the left side of the heart is underdeveloped. His family calls Ethan "our miracle." Rebecca Rider/Salisbury Post

ROCKWELL — The sidewalk in front of Shive Elementary was packed with kids Tuesday morning. The students were led outside during a fire drill, then directed toward the front parking lot. The teachers had done a good job of keeping a secret, and the kids had no idea that one of them was about to have a wish granted.

For Ethan Moore, a 5-year-old pre-kindergarten student, the day was a dream come true. A representative from the Make-A-Wish Foundation called him up to the microphone.

“Guess what, Ethan?” she said. “You’re going to Disney World!”

Ethan’s biggest dream is to go to Disney World, his grandmother Tammy Efird said. He’s been a fan of Lightning McQueen, the bright red race car and star of the movie “Cars,” since he could talk.

Ethan applied for Make-A-Wish last year, when a social worker told mother Autumn Moore he might be eligible. Make-A-Wish can grant one wish for a child under the age of 18 who has a life-threatening medical condition, if approved.

Moore said that for a while, they weren’t sure Ethan’s wish would be granted.

Congrats to this Ethan Moore, a Shive pre-k student who had his wish granted today by @MakeAWish ! pic.twitter.com/daEZjVlp3P

Ethan was born with hypoplastic left heart syndrome, where the left side of the heart is underdeveloped. His family didn’t find out until after he was born, and Ethan had his first heart surgery at seven days old. Doctors told the family that he would never eat without a feeding tube, walk or talk.

But Ethan’s proved them all wrong.

It doesn’t mean it’s been easy, though. At 5 years old, Ethan’s been on life support and has had five heart surgeries – but he’s pulled through thanks to prayer, Efird said.

Last April, Ethan suffered seven strokes and had to go to occupational therapy to relearn to walk and use his hands. During his recovery, the only nurse Ethan wanted was his 7-year-old sister Ashlyn, who Efird said looks out for her younger brother. In August, Ethan started attending pre-kindergarten at Shive.

“He doesn’t let nothing slow him down,” Moore, his mother, said.

Those who know him describe Ethan as an outgoing, determined child who wants to do everything by himself. They said he flashes a dimpled grin that draws people in.

It was his teacher at Shive, Lisa Overcash, who arranged Tuesday’s short celebration. The wish reception included an appearance by school mascot Zinger and a ride in a Jeep, donated for the occasion by Gerry Wood Honda. Ethan and Ashlyn hopped in the car and leaned out the windows, waving at the rest of the students.

Overcash said having a wish granted was something to be celebrated.

Ethan said he’s looking forward to seeing Mickey Mouse and Lightning McQueen at Disney World. The family leaves for their vacation on Friday.

Efird said she used to wonder what would have happened if Ethan was born healthy, but she said if he had been, he wouldn’t be the same Ethan.

Efird said that more children die from heart defects than from any other childhood illness. She hopes that by sharing Ethan’s story, the family can bring awareness. She and the rest of the family are looking to start a foundation that would provide aid to families with children facing extended hospital stays.

“Ethan’s going to be our miracle,” Efird said, “He’s got so much prayer on him.” Teacher Lisa Overcash, left, and sister Ashlyn Moore, center, present Ethan Moore, right, with a pillowcase he can have characters sign while at Disney World. Ethan, 5, will travel to Disney with his family thanks to Make-A-Wish. Rebecca Rider/Salisbury Post

By Mike London mike.london@salisburypost.com The New York Jets signed Romar Morris to a contract on Tuesday and made him a... read more