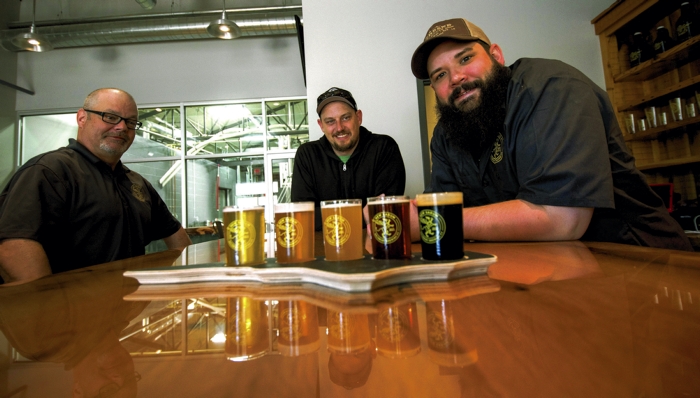 JON C. LAKEY / SALISBURY THE MAGAZINE Jim Whelen, Gian Moscardini and Brewmaster Andy Maben at the bar with a flight of their products. New Sarum Salisbury Brewing company is operating at their new location on North Lee Street.

Editor’s note: This is a reprint of a feature story from the June/July (Summer) issue of Salisbury the Magazine. A production error in the magazine article led to some portions being repeated or left out, so here is the full version of that story.

Tommy and Amie Baudoin found many of their guests, especially the guys, preferred beer to wine. Tommy started brewing his own beers on site, like Panther Point Ale, Buffalo Head IPA and Flat Creek Swamp Water.

“The only thing better than one craft brewery is two,” Tommy says.

Both breweries want to make their products as local as possible, using local grain and good old Yadkin River water, straight out of Salisbury’s water system.

New Sarum also resurrected some of Salisbury’s past. When you walk into the taproom, you’ll see wood salvaged from Grimes Mill, which was destroyed by fire in 2013, including a gleaming 16-foot table.

Take a peak through the glass doors into the brewery, and you’ll see rows of new, shiny stainless steel tanks, miles of pipes and hose and busy brewers.

New Sarum started brewing in carboys (large glass jars) in what was an office space next to Salty Caper on Lee Street. Brewmaster Andy Maben, who is also one of the owners, knew the old Salisbury Tractor building behind the Gateway would become their bigger, better brewhouse.

It was a brick shell with a dirt floor that needed everything. Morgan Ridge, beginning construction in an old grocery warehouse on Rail Walk, also on Lee Street, is starting with the same empty shell.

Local is the key, Maben says. The grits in the 142 Blonde Ale are from MikNik Farms. The Riverbend Malt comes from Buddy Hoffner’s farm. They’re working with Catawba College interns to develop a Rowan County yeast. Aaron Goss has started a malt company, and Maben hopes to use him to source some grains that are gluten-free, such as sorghum. Fading D Farms’ water buffalo get to eat the spent grain, as do the animals at Two Pigs Farms.

Other owners include Gianni and Edward Moscardini. Edward says New Sarum uses twice as much product as other, larger brewers to make their beer. “It costs more, but it’s better,” he says.

This brewery, like the one Morgan Ridge plans, required extensive plumbing, piping and electricity. New Sarum also has a large drain system necessary for cleaning the tanks. “Brewing is 95 percent cleaning,” Maben says.

The group spent their money on brewing equipment and a state-of-the-art lab to ensure the beer is consistent and enjoyable.

John Whelen, one of the marketing directors, says New Sarum has “killer employees. They really take care of things, they do lots of quality control.” Edward says the No. 1 reason the beer is good is Andy, who shakes his head and looks in the other direction.

Brewing beer is the focus. All the rest is “icing on the cake,” such as the taproom and going to festivals. At the recent Beer Me festival in Charlotte, the Hurley Park Blood Orange Wheat won first prize.

For the grand opening, Maben made Apple Ugly Belgian Strong Golden Ale, which is light, with a hint of cinnamon and apple. They added some wheat to counteract the oil used to fry the pastries, but be assured, those treats went into the tank. The only problem was getting the bits of apple out.

Outside, in their courtyard/beer garden, are two 80,000-pound grain silos. One is just for the Riverbend Malt. Clear pipes will allow visitors to watch the grain moving into the building for processing. A wall separating the silos from an area of picnic tables was built by Gian with bits of wood and tin off his farm property.

The large grain room smells like a bakery, with hints of biscuit and chocolate. In there is a grain mill where they can cut and blend grains specifically to their needs.

In the brewery are six 60-barrel tanks, two 90-barrel tanks and four 30-barrel tanks, along with a cereal cooker, mash tun, a hot liquor and a cold liquor tank, and a chiller, which allows them to cool the beer quickly.

In the taproom, the stainless steel wall of taps looks serious, with red and black pipes and a Willy Wonka-esque drain system of three bright red half-pipes that empty into a drain on the floor. “Industrial/farm” is how Gian describes the stools around the room, looking sort of like those old metal chairs that used to sit on porches all over the South.

The only other drinks you can get in the taproom are water and Cheerwine. “Like I said, we want to keep it local,” Andy says. He’s working on an idea to make a beer using Cheerwine, too.

They bought their own truck for distribution, which is extending to Charlotte and the Triad first. “We’ll see how that goes,” Andy says, “and then we can expand.”

Instead of a canning line, they fill and distribute kegs. When it’s time to can, Land of Sky brings in its equipment, does the job and leaves. A cold room, kept between 35 and 38 degrees, was built by Imperial Brown to hold the canned beer and filled kegs.

Andy points out that the six-pack holders are 95 percent recycled and won’t harm animals, as standard holders can.

New Sarum’s brews cover a wide range of tastes. Andy says the porter “has crazy amounts of different malts. … It has earthiness and hoppiness.” The Red Ale is based on an extra special bitter English ale. Chocolate malt and rye give it its distinctive color. The blood orange wheat has been especially popular with its citrusy notes and light body.

In the taproom, a flight consists of the five beers, presented in a tray shaped like North Carolina. If you like the look of it, they’ll be available for sale, too. Or you can get a 32-ounce or 64-ounce growler. A glass of beer is a pint, 16 ounces.

Seasonal brews are on the way, Gian says. Andy has perfected the recipes for 17 beers.

They’ve also bought a food truck. The Wednesday evening Salisbury/Rowan Farmers’ Market will be in the parking lot from 4-7, and Gian says they will try to use those products on the truck.

New Sarum is open Wednesday and Thursday, 4-9 p.m., and Friday-Sunday from noon to 9 p.m.

Morgan Ridge is making progress. The venue will have its main entrance at the back of the warehouse, with patio space, a deck and a restaurant and the brewery inside.

Tommy Baudoin and Vanita Edwards have been brewing in a small system at the winery. Demand has grown and Tommy felt it was time to expand. He felt they would get more traffic in Salisbury, especially with New Sarum nearby.

“That’s good for both of us. People can come to town and try out two breweries, just like they visit several wineries in a day in the same area,” Tommy  says.

“Over the last two years we’ve been brewing, we’ve developed some recipes people really enjoy. We’re going to start with larger scale brews of those. We’ll do seasonal and specialty brews” and keep the four-barrel system at the winery to experiment with new recipes.

Nicole Koontz, the former head brewer at Carolina Blond, will be the brewmaster.

The plans are to be open Wednesday-Sunday for lunch and dinner, from noon-10 p.m., or a little later on Saturdays.

The restaurant will be full service, casual dining. Chef Jason Nain, who plans all menus and cooks at the vineyard, will create a menu with as many local ingredients as possible. They will use beef that has been fed the leftover mash from the beer making. Morgan Ridge wines will also be available. Tommy estimates there will be 100-120 seats inside, with eight to 10 tables outside.

One advantage to doing this in the city is the water supply. “Beer takes a lot of water, a lot of cleaning tanks,” Tommy said. “We couldn’t do large scale on our septic system in Gold Hill.”

They plan to offer flights of beer, pints and growlers. They will not be bottling yet. “It depends on the reception,” Tommy says. “If we do wholesale, I like to use cans, because they are recyclable.”

They want to draw people from out of town into downtown. “It’s not just good for us, but for everyone else in the area.”