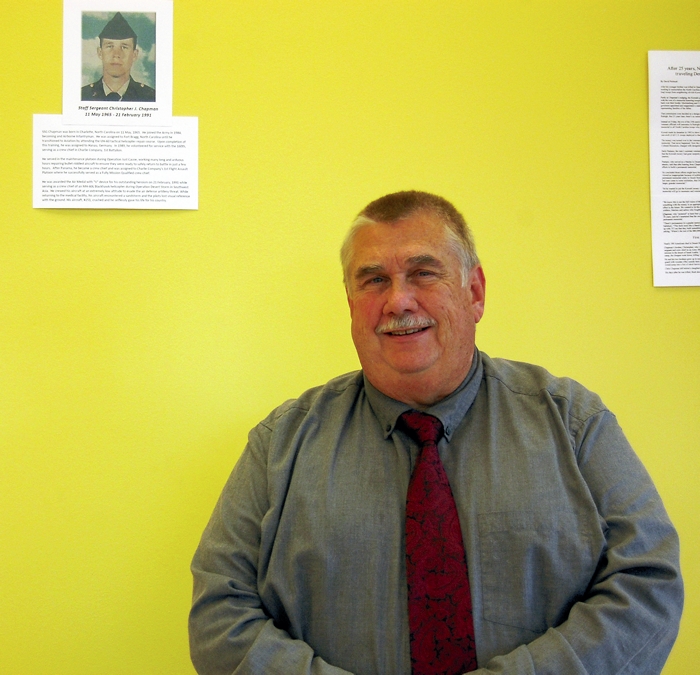 Michael Chapman, manager of the Mattress Firm at 821 E. Innes St., stands in front of a picture and some information about his brother, Staff Sergeant Christopher Chapman, who died serving in the military. Other community members with friends and family who have died serving are invited to submit pictures and information to post up on the wall Chapman has started at the store for Memorial Day. Amanda Raymond/Salisbury Post

SALISBURY — Michael Chapman, manager of the Mattress Firm at 821 E. Innes St., and other Mattress Firm managers are allowed to decorate their stores for Memorial Day. This year, Chapman decided to do something different.

“Decorations are fine, but let’s do something meaningful,” he said.

Chapman designated one of the walls of his store as a memorial wall for families and friends to hang up pictures and biographical information of the loved ones they have lost who served in the armed forces.

He put up some pictures and quotes on Saturday to get the wall started, including a picture and biographical information about his brother, Staff Sgt. Christopher Chapman, who joined the Army in 1984 and became an airborne infantryman. He later transitioned into aviation. He was serving as crew chief during Operation Desert Storm in southwest Asia when he died in an aircraft crash after it encountered a sandstorm in February of 1991. He was awarded with the Air Medal with “V” device for his heroism that day, which included crewing the aircraft at “an extremely low altitude to evade air defense artillery threat,” according to the description.

Chapman said when someone loses a loved one in a war, it can feel as sudden as losing someone in a car accident.

“It makes an impact,” he said. “It changes their lives forever.”

Chapman said he wanted to start the wall to not only honor those lost serving in the armed forces but also to educate his employees and customers.

Memorial Day honors those who died serving in the Armed Forces, not to be confused with Veterans Day, which honors everyone who has served.

Chapman said that saying “Happy Memorial Day” can be insulting because Memorial Day is more of a solemn holiday.

“It’s a day to remember those servicemen who died for this country,” he said.

Though Chapman sees nothing wrong with Memorial Day sales and cookouts, he said there is something disheartening about the poorly attended Memorial Day ceremonies and events.

One of the quotes Chapman put up on the wall reads, “All gave some, some gave all. Gone, but never forgotten!”

“Unfortunately, I see that they’re being forgotten,” Chapman said.

He said it is important for families with children to attend the events so that younger generations can learn what Memorial Day is all about.

Chapman said if the wall is successful, he plans to pitch the idea to higher ups at Mattress Firm, and he also hopes other companies will find their own ways to honor the families who have lost loved ones in the armed forces.

Chapman will keep the pictures and biographical information up on the wall for a few weeks after Memorial Day. He said the more items he receives, the longer he will keep them up.

“If I can educate one person, then I think this was successful,” he said.

Drop off pictures and biographical information about lost loved ones at Mattress Firm at 821 E. Innes St. The loved ones do not have to be from Rowan County. The store is open Monday through Saturday from 10 a.m. to 8 p.m. and Sundays from noon to 6 p.m. Call Chapman at 704-219-2484 for more information.