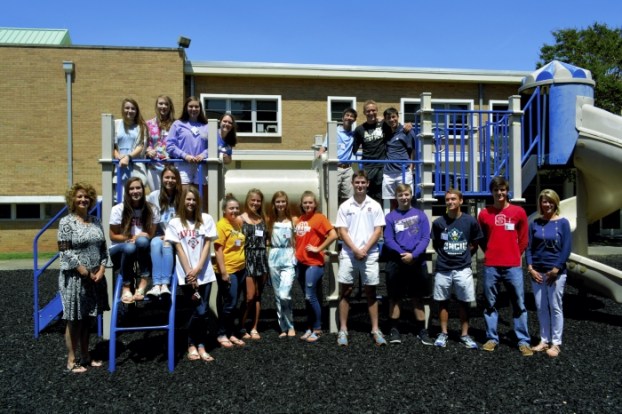 Members of the St. John’s Kindergarten Class of 2004 — all of who graduate from high school this year — pose on the playground with their teachers, Teresa Stoner, left, and Bonita Rowland, right. Photo by Susan Shinn, for the Salisbury Post.

Some 18 members of the St. John’s Kindergarten Class of 2004 — the graduating high school Class of 2016 — gathered last Sunday for a reunion and celebration.

Most of them came attired in T-shirts representing the colleges and universities they’ll attend this fall — Davidson, Carolina, State, Western Carolina, Appalachian, Clemson, South Carolina, Salem, East Carolina, West Point, UNCW — and many were eager to share prom photos from the night before.

They giggled at their kindergarten portraits on their nametags.

“My bangs look a little rough,” said Caroline Parrott, whose bangs have long since grown out.

They talked about field trips to the farm, and the end of the year program, where they dressed up and sang songs.

“Isn’t this so fun?” asked Mimi Webb as her former classmates gathered.

Just like kindergarten, the girls clustered in one group, the boys in the other. And the group of parents stood chatting to the side, laughing and taking lots of photographs.

Nearby, Katie-Ann Dangerfield sat placidly, playing at the train table. Her older brother Jordan is a St. John’s Kindergarten graduate, as is her older sister, Lilly, along with their mom, Ashlee Dangerfield, and their two aunts.

“I remember all my teachers,” said Lilly, 9, now a third-grader at Granite Quarry Elementary. “Play time was fun.”

“This is home for us,” Ashlee said. “It wasn’t an option to go anywhere else.”

Chloe Burks will study elementary education this fall at ECU. Her love of learning was formed here, she said.

“I remember bouncing on the mulch at the playground,” she said, “and I remember our Valentine’s Day dance. It definitely started me off on the right foot in terms on getting a good fundamental education.”

The reunion was the brainchild of Lori Yang, whose sons, John and Alex, will attend UNC in the fall. Her youngest son, Luke, is a kindergartener this year, and daughters Ellen and Ashley are also kindergarten graduates.

“This is just a great group of kids,” Lori said. “It just goes to show what a great program this is, and these kids have some wonderful memories. My son Luke is in kindergarten this year, and the program is just as good as it was when John and Alex were here.”

“I recognize all these kids even though they’re big,” said Teresa Stoner, longtime kindergarten director. Bonita Rowland is the kindergarten teacher, and Teresa teaches the 4-year-old class. “They just don’t know how much it means for us to come back and visit us.”

“I love knowing that St. John’s Kindergarten holds such special memories for its graduates and the families in our community,” said the Rev. Rhodes Woolly, who stopped in before singing with the Men’s Chorus for their afternoon concert. “For 75-plus years, it’s been a place where kids are loved and nurtured, grow in faith, and enter school ready to learn. It’s a very special place.”

After the teens had a group picture made at the playground, Teresa Stoner rang the bell to go inside, and, without thinking, everyone formed a single-file line.

“Boys and girls?” said Lori, after the teens spent some time visiting and catch up. “I love saying that! This day is probably as special for us as it is for you.”

She then explained it was time for snacks — goldfish, cheese cubes, strawberries, cake and other treats — and then they would all sit on the carpet to watch a DVD of class memories (after they threw their trash away, of course).

At just over 6 feet, Sam McNeely laughed as he tried to fold himself into a small chair and slide under the small table.

“You cannot get a better start than this place right here,” said Bonnie Emerson, whose son, Ike, will attend West Point this fall.

“It’s so hard to believe that such a short time ago they were here,” Mark Derrick told fellow dad David Agner.

“I just remember the loving environment and the teachers who created it,” she said. “I was just so grateful for that. There’s no place like St. John’s.”

By David Freeze For the Salisbury Post CHINA GROVE — Singing in the choir at First Baptist Church in China... read more