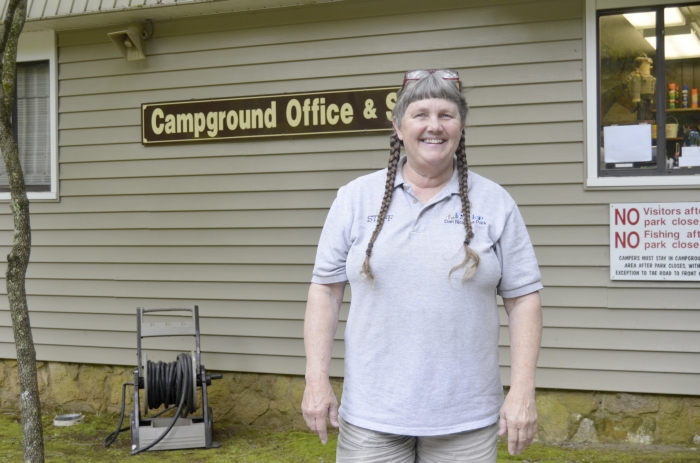 Carol File, campground supervisor at Dan Nicholas Park, has been with the department for 25 years and will soon retire. The native New Yorker is most comfortable in pigtails and outdoors riding horses with her husband, Joe. Shavonne Walker/Salisbury Post

SALISBURY — When Carol File pulled up to the entrance of Dan Nicholas Park 25 years ago for her first day on the job, she saw a parking lot, splash pad and screaming young children. File immediately assumed she’d be bored and she was not a fan of screaming kids.

Prior to her job with Dan Nicholas Park, File worked for a month in the county’s recycling department. It was a way to get her foot in the door and gain employment with a county department.

“I knew I wanted to work at the park,” File said from the campground store.

Flash forward — File is the campground supervisor and, in less than two years, will be on her way out the door headed for retirement.

File has been a one-woman-show for much of her time at the park, but she has over the years had volunteers, part-time help and trained over 25 people.

There have been some changes over the years, including how many more people camp throughout the year. Just last year alone, there were 22,000 people who rented 7,289 camp sites from the park, File said.

She enjoys every day at the “office,” simply because of the people she’s surrounded by whether they be campers, co-workers or volunteers.

“People come in here and they are so happy to be here,” she said.

File truly loves to see people come into the campground store/reservation office with smiles. She meets people from all over the United States and sees regular campers return each season.

File estimates she has had the same hair style since she was a 3-year-old, but at 60 she’s still rocking her pigtails and bangs.

“Mom had me at the sink with a glass of water. I’m not interested in dresses. I’m always in pigtails,” she said.

When given directions to the campground and how to find File, she was described as the woman with pigtails.

Her first husband had a job that required a lot travel and at one point Carol was tired of moving. Her then husband told her to “pick a place.”

She chose Charlotte because it had a warmer climate than New York. He found a job in 10 days and she landed at the recycling department.

A New York native, Carol grew up near a horse farm and actually delivered newspapers as a kid on horseback.

She’s always had a love of horses and is a past president of the Saddle Club. Joe, Carol’s now husband, even proposed to her during a Saddle Club gathering. In 1997, the two rode horses as they got married in the woods.

The couple’s guests were led into the woods in a wagon pulled by her mule. Carol told Joe she’d marry him if he bought her a mule and he did.

File has a simple routine — every morning or close to four times a week, she swims and works out at the YMCA. She and her husband, Joe, have a pasture behind their home where they ride horses and camp.

The couple go camping once a month, usually for a four-day weekend and have a camper so big their horses accompany them on their trips. The camper is heat controlled, has sleeping quarters and a fridge.

The Files have camped in South Carolina, Virginia, Blowing Rock and locally including Morrow Mountain in Albemarle.

The couple also fish and maintain their property. So what will Carol File do once retired?

“I want to goof off with my husband before he’s too old,” she said with a smile.