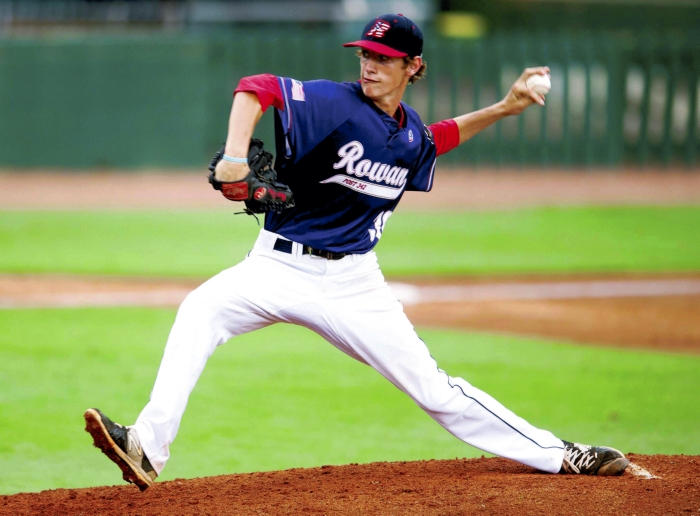 LEXINGTON — Rowan County American Legion baseball coach Jim Gantt cautioned everyone not to read too much into Sunday’s 12-1 walloping of Davidson County in the season opener.
After all, Rowan (1-0) has its full team, while Davidson is awaiting reinforcements from North Davidson and Ledford, schools that have fought their way deep into the high school playoffs. 3A Ledford (24-5) beat top-seeded Crest on Saturday. 4A power North Davidson is 25-1 and ranked nationally.
“Our guys did good tonight,” said Gantt, after Rowan mercy-ruled the home team in eight innings at Holt-Moffitt Field. “But Davidson County will be a completely different team in a few weeks. They’ll probably have a great team.”
A third-inning lightning delay proved Rowan’s biggest obstacle.
Lefty Bryan Ketchie, a Catawba signee who was 6-0 for Rowan’s state-championship team in 2015, was efficient before and after the lightning delay. He worked five innings for the win. He kept his outfielders busy with routine flyballs and he got a lot of outs with one or two pitches.
Right-hander Sawyer Strickland, a Greater Cabarrus Homeschool Stallion who also is headed to Catawba, pitched three brisk innings and earned a save. Strickland is also a veteran of last season’s championship run.
Ketchie and Strickland held Davidson County to five hits.
“Both our pitchers were very good,” Gantt said. “They’re guys we’re counting on.”
Seth Cauble was the catcher for the Stallions, who finished third in the Homeschool World Series, but Rowan has plenty of catchers, so he was roaming left field. He turned out to be the sparkplug for the offense, stealing bases, scoring runs. and driving in runs
“I really like Cauble’s demeanor,” Gantt said. “He’s respectful. He’s disciplined. He’s very mature for his age.”
Hit by a pitch in the first inning, Cauble came around to score on a steal and a pair of wild pitches.
Rowan made it 3-0 shortly before the lightning delay when Cauble singled home Chandler Blackwelder, and then scored on a wild pitch.
Davidson County got on the board in the third, but Rowan got two in the fourth to make it 5-1. Again, Cauble was in the middle of it. He knocked in a run. Then shortstop Dalton Lankford, another Homeschool Stallion, got the fifth run home with a single off the pitcher’s glove.
Rowan’s two-run sixth made it 7-1 and broke it open. Hunter Shepherd – yes, another Stallion — got one run home with a sac fly. Another scored on a Davidson miscue.
“We scored runs the way we’re going to have to score runs, by running the bases correctly and by doing the little things,” Gantt said. “We don’t have a whole lot of power, so we’re going to put runners in motion. It’s not like we can sit back and wait for three-run homers.”
A two-run seventh included a sac fly by Blackwelder and Cauble’s third-run scoring single and turned it into a laugher.
Rowan tacked on three more in the eighth. Brandon Walton’s RBI double and Jake Pritchard’s single made it 11-1, and the final run scored on an error.
Rowan will send John Owen, who started at second base on Sunday, to the mound tonight at Newman Park against Randolph County. First pitch is at 7 p.m.
Owen was the county’s biggest winner during the high school season. He was 10-2 for East Rowan.
•••
NOTES: Walton’s eighth-inning double was the most sharply hit ball by Rowan. … Holden Lanier, who played for North Rowan in the high school season, had a double for Davidson County. Noah Jarrett, a homeschooler who pitched for Rowan last season, worked in relief for Davidson County.