“With thankful hearts:” Hood Theological Seminary graduates go forth to serve in a challenging world 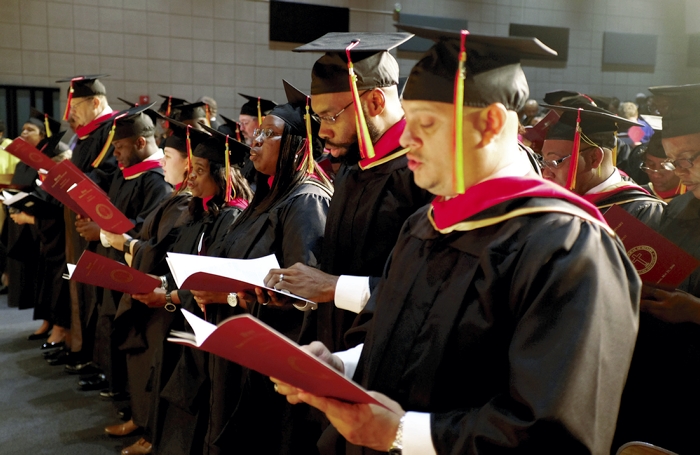 Hugh Fisher/For the Salisbury Post New graduates of Hood Theological Seminary join in a hymn of praise Saturday at the institution's commencement exercises.

SALISBURY — Some of them will be pastors, while others will serve as chaplains or associate ministers.

But all of the 39 graduates of Hood Theological Seminary who celebrated their achievements on Saturday will take their newfound knowledge into a world that, as commencement speaker Dr. John Matthew Sleeth told them, men and women “with thankful hearts” are needed.

Family and friends looked on as the graduates filed into Varick Auditorium at Livingstone College, where the ceremony was held due to bad weather earlier in the week.

Sleeth told this year’s graduates that their fundamental mission, regardless of where they go to work, will be the same as Jesus Christ’s, Sleeth said. “Preach the gospel to the poor, heal the broken-hearted, deliver the captives and preach the acceptable year of the Lord,” he said.

But no matter what, Sleeth encouraged them to stay cheerful and focused on the good, no matter how challenging the circumstances.

The seminary also conferred honorary Doctor of Humane Letters degrees on Sleeth and on Bishop L. Jonathan Holston, resident bishop of the South Carolina Conference of the United Methodist Church.

Sleeth, a former medical doctor, is executive director of Blessed Earth, an educational non-profit. An adult convert to Christianity, he is author of several books, including “Serve God and Save the Planet,” which encourages Christians to be better stewards of the natural world by embracing less materialistic, more humble lives.

For those who’ve spent years studying and working on degrees, Saturday’s ceremony was a time to rejoice.

“I started in January of 2013, and I finished in December of 2015,” said the Rev. Charlrean B. Mapson, of Wilmington, who officially received her Master of Divinity degree at commencement.

“This has been an emotional weekend for me, just remembering all that I had to do to get to this point,” said Mapson, who is pastor of St. Mark AME Zion Church in Whiteville.

Family and members of her church drove from Wilmington to celebrate this weekend. At the seminary’s Closing Convocation on Friday, Mapson was honored with the Faculty Award, which according to the commencement program, is given to a graduating senior “who has demonstrated academic excellence and who has made the most outstanding contribution to the life of the Seminary.”

Mapson said receiving this award was “a humbling experience.” In addition to working as a pastor for the past five years, she has been raising a son.

Despite the hard work, Mapson said her education has made a difference in her ministry. “I have used every single class that I have taken here,” she said.

For Tangela Cameron, of China Grove, graduation marks the start of a career journey. “I’ve been one of the youngest students,” said Cameron, who came to Hood Theological Seminary immediately after earning a B.A. in Elementary Education at Catawba College in 2012.

“The next step is to look for a residency in chaplaincy, so I can get the hours I need to work as a chaplain in a hospital or hospice setting,” Cameron said.

She said she feels called to chaplaincy because of the opportunity to minister to many different people, with different needs and concerns.

Her husband, Aaron Cameron, looked on as she received her degree.

“I’m proud of her, and I’m saying it’s about time!” Aaron Cameron said. He supported her by listening to her sermons and giving her feedback, encouragement and support. “I’ve been with her on the journey,” he said.

Nearby, the Rev. John L. Krider, who received his Doctor of Ministry degree, said 20 years as a U.S. Army chaplain helped prepare him and inspire him to further his education.

“I wanted to prepare myself to better meet the needs of the people,” said Krider, who has pastored Ambassador Christian Church of Salisbury for about 10 years.

Krider said that the Doctor of Ministry degree “prepares one to minister in a variety of roles, as a pastor, a teacher, to prepare people for marriage, to counsel families and to minister in hospitals. It’s a diversified qualification.”

Two years in the classroom were followed by a multi-stage research project to understand and address a real-world problem in the ministry.

The journey to his doctoral degree has been a long one, Krider said. “I earned a B.A. in Sociology at Livingstone College, followed by a master’s degree from Hood in 1974,” Krider said. “Today, graduating gives me a feeling of humility. It’s like starting all over again.”

Humility is a virtue, but on Saturday, Dr. Sleeth encouraged the newly-minted graduates to take pride in their accomplishments.

“Up to now, you’ve been like Moses on Mount Nebo, looking at the Promised Land,” Sleeth said. “Now, you get to be Joshua and enter it!”

But Dr. Sleeth also encouraged the ministers, counselors, chaplains and other servant-leaders to stay focused on the good they can do, and the miracles they can see around them, in a challenging world.

“There are many little and big things in the world to be thankful for today, things like love and friendship, the Bible, our wives and husbands, our brothers, sisters and children,” Sleeth said.

He encouraged the new graduates to stay thankful and prayerful as they set out to bring God’s love into the world, no matter where or how they serve.