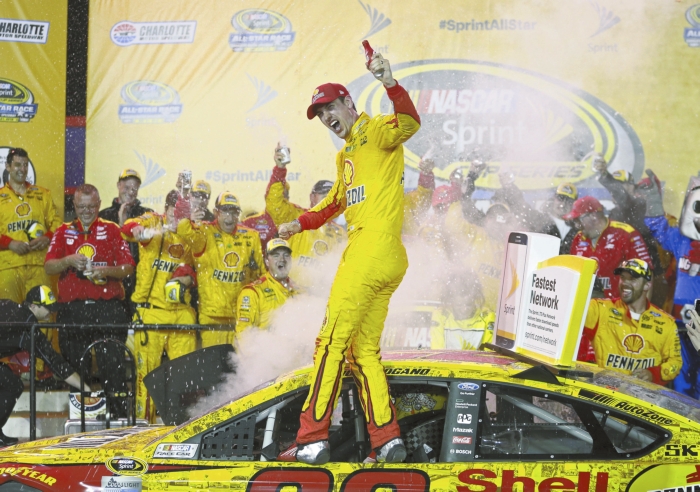 It also produced an aggressive race that ended with a thrilling finish.

Although he didn’t win, Larson was the star of the day. He had to race his way into the main event earlier Saturday, and earned his spot in the 20-driver field by beating Chase Elliott in a stirring last-lap door-to-door battle to the checkered flag.

Larson was competitive during the 113-lap main event and won the second segment. He had to pit for four tires, restarted in third for the final 13-lap dash-for-cash and rocketed his way to the lead. He seemed to have it in control until Logano eventually caught him. Larson tried several times to hold him off, but as the two raced side-by-side, Larson smacked the wall and the damage took him out of contention.

Logano then cruised to the win ahead of Team Penske teammate Brad Keselowski, who suggested much of the race format.

Keselowski defended the format, which cut the race into three segments and included a blind draw before the final shootout that ordered a random number of cars to make a mandatory four-tire pit stop. But it also created some apparent sandbagging and a lot of confusion among the drivers.

“There was a next to last lap pass for the lead. There were several passes for the lead,” Keselowski said. “The last four (All-Star) races, there hasn’t been a pass for the lead in the last 20 or 30 laps. I think our fans deserve a better format than that, and they got that.

“I don’t know how you can get much more compelling racing than what we saw today, so they need to get unconfused and enjoy the racing.”

Third-place finisher Dale Earnhardt Jr. admitted to being confused until the final segment.

“I think that the intent was really positive and the ideas were great, but the simpler we make it, the easier it would be to follow,” Earnhardt said. “I was pretty confused right until it was 13 to go and it was all the normal rules. Gimmicks and all that stuff is going down the wrong path.”

The race was cut into a 50-lap segment that required drivers to make a minimum two-tire pit stop under green. But a caution prevented Matt Kenseth from making his stop and he was penalized. From there, no one seemed to have any idea what was going on.

The second 50-lap segment also required a minimum two-tire pit stop under green before the 35th lap of the segment. There was then a draw to determine whether the first nine, 10 or 11 cars would have to do a four-tire pit stop during the break while the remaining cars were not allowed to pit.

Jimmie Johnson seemed determined to be 12th at the time of the inversion, and Kyle Busch was caught speeding on pit road at a time that put him in position to drop below the inversion mark, as well.

“You guys are punting on second down,” said Carolina Panthers tight end Greg Olsen, who drove the ceremonial pace car and randomly chose the envelope that decided the first 11 cars would have to pit. But, because of earlier penalties and a crash, only two cars — Johnson and Busch — moved to the front of the field.

“This race reminds me of the first time I tried to fly a remote control helicopter. I have no idea what’s going on,” Earnhardt radioed at one point.

The one bad crash occurred in the second segment when it appeared Elliott, winner of the fan vote, was trying to get to pit road and it seemed to create some chaos behind him as cars tried to avoid Elliott. Kenseth was spun and turned into Tony Stewart, who bounced off the wall and then into Kasey Kahne’s car.

Stewart, who missed the first eight races of this season with a back injury and also crashed hard last weekend at Dover, seemed fine as he climbed from his smoking car. It’s the final All-Star race for Stewart, who is retiring at the end of the season and gave a subdued command to start the engines from his cockpit.

“I’m as baffled as everybody. It’s the most screwed up All-Star race I’ve ever been in,” Stewart said.

Asked if he was OK after the hit, he said he wasn’t injured but “madder than hell because I don’t understand how they’ve officiated this thing from start to finish.”

“I hope everybody understands this race better than I did because ever since that first pit stop, I had no idea what was going on,” Kenseth said from the garage.