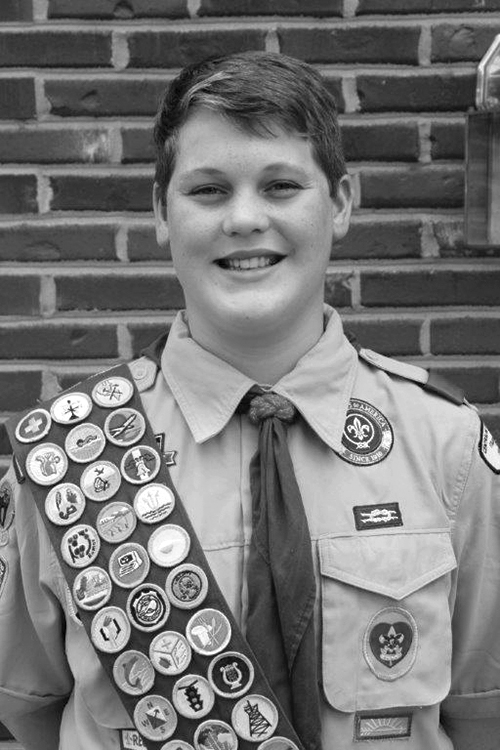 Harrison Jacob Parrott, 14, will receive his Eagle Scout Award Sunday, May 22, 2016 at St. John’s Lutheran Church in Salisbury. Harrison began his scouting career as a Tiger Cub in Pack 443 in the fall of 2007. As a Cub Scout, Harrison earned the God and Me, God and Family, and the Cub Scouts’ highest award, the Arrow of Light. He also earned the Super Achiever Award by earning every Cub Scout Activity Pin. Harrison was the recipient of the Pack 443 Spirit Award in 2012.
As a Boy Scout, Harrison has earned 78 Merit Badges, the Messenger of Peace Award, the Totin’ Chip, the Firem’n Chit, the Cyber Chip, the National Outdoor Awards Program for Camping and Conservation, and the World Conservation Award. He has also completed the God and Church and God and Life awards and coupled with those he earned as a Cub Scout, he completed the esteemed God and Country Award. Harrison was the recipient of the Troop 443 Spirit Award in 2013, 2014, and 2015. In 2013 he was elected to the Order of the Arrow and became an Ordeal Member. He became a Brotherhood Member in 2014.
Harrison has served in several leadership roles in his troop including Patrol Leader, Chaplain Aide, Senior Patrol Leader, and currently serves as a Junior Assistant Scoutmaster. He regularly attends Summer Camp and has attended both Camp John J. Barnhardt in New London, NC for the last four years and attended Camp Daniel Boone in Canton, NC in 2013 and 2014.  Harrison travelled last summer to East Lansing, Mich. as part of the Itibapishe Iti Hollo lodge contingent to take part in the 2015 National Order of the Arrow Conference (NOAC).  He has spent well over 100 nights camping while a member of the troop and also enjoys backpacking and outdoor cooking.
For his Eagle Scout service project, Harrison planned and constructed an Outdoor Music Station and Weighted/Balance Scale for the Salisbury Academy Kindergarten/Junior Kindergarten. In addition to constructing and installing these items, he made landscape improvements at the school with some plantings, weeding beds around the school property, as well as trimming crepe myrtles on the property.  The project involved 214 service hours and involved a total of 19 different volunteers.
The son of Jake and Carole Parrott, Harrison is a freshman at Salisbury High School, where he is a member of the cross country, swimming and golf teams. He is also a member of the Crosby Scholars.
Harrison is an active member of St. John’s Lutheran Church where he is involved in the youth program. He has attended youth mission trips to Knoxville, Tenn. and attended the Evangelical Lutheran Church of America National Youth Gathering in Detroit, Mich. in the summer of 2015.  He serves as the youth representative on the Church Council and is a member of the Order of St. John’s where he participates as an acolyte, crucifer, banner bearer, and torch bearer.  He is also a member of the Youth Discipleship Team and also serves as an usher.