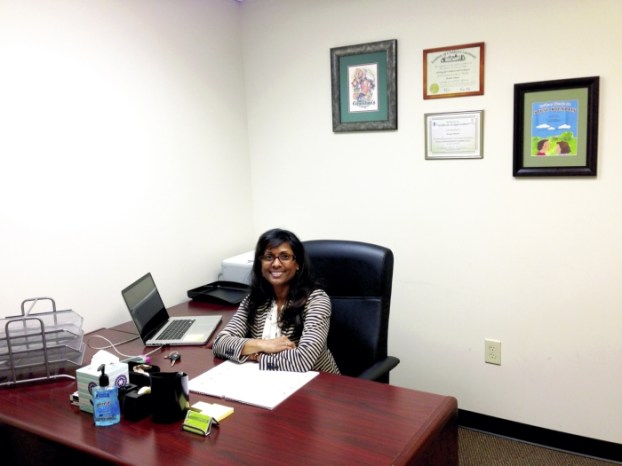 CONCORD — One of Renate Moore’s missions in life is to make the world a better place. Her parents taught her to always put herself in other people’s shoes. She is the kind of person who thinks to herself, “If I don’t do something to help, who will?”

She decided to give back to the community as CEO and founder of her own business, a combination children’s bookstore and gourmet bakery called Lady Ren’s Nook: Tastee Treats -n- Children’s Books.

Moore has always had a passion for education. She was born in British Guyana, now known as just Guyana, South America, where she said there was a strong emphasis on education.

“It was something that was expected, keeping up and having good grades,” she said.

She completed a lot of her schooling while in South America and went to colleges in New York after she moved to the United States in the early 1980s.

Moore would later earn a diploma from a writing course, but before then she used her degrees to embark on careers on Wall Street, real estate and International Education.

“I come from a wide variety of busy, corporate jobs,” she said.

Moore left all that behind when her husband had to move to North Carolina because of his job.

Moore recalls not having many opportunities to get back into the corporate world when she moved to Concord, and she also had her young children to care for.

She had a hard time adjusting to life in North Carolina because for one of the first times in her life, she wasn’t working.

“That’s just who I am. I enjoy working, I enjoy meeting people, talking to people and learning all the time,” she said.

Her husband was the one who reminded her that she always used to say she wanted to write children’s books. Moore said she is an “avid reader,” and thought writing children’s books would be a good way of getting kids interested in reading at a young age.

“I know a lot of children do not like to read,” she said. “I thought, ‘This is to capture them and teach them that reading is actually something that you can enjoy.’”

Moore wanted to get educated on the craft before jumping in, so she took a writing course at the Institute of Children’s Literature in Connecticut.

Moore now has two published books. Her first, “A Frog in Grandma’s Cup,” is about a grandmother who has to learn to deal with change, based on her experience moving to North Carolina.

Her second, “Mystery on Stone Mountain,” is based on her father’s childhood stories that he would tell her when she was a child.

The location of her second book is actually based on a spot in South America where her family would take trips when she was young, and the look of the grandparents in “A Frog in Grandma’s Cup,” was modeled after her parents.

She tries to make her stories funny and entertaining so that they can keep a child’s attention, but she also includes life lessons and other educational pieces like geography and vocabulary to help build a child’s skills.

“Reading is the key to opening up a new world of discovery for every child,” she said.

Moore did not just stop with her books because she had another passion that she wanted to explore — baking.

Moore said she likes entertaining guests and constantly received compliments on both her cooking and baking.

The bakery items Moore provides are made from healthy, wholesome, natural and mostly organic ingredients. She personally makes all the cakes, cookies, pastries and jams from scratch.

“Life is not about depriving yourself, and I feel the more you deprive yourself, the more unhappy you become,” she said.

Moore said she believes life is all about balance. As long as a healthy balance is maintained, people should not be afraid to indulge their sweet tooth.

“People can enjoy the simple pleasures of life, including dessert. It is doable, but it’s a matter of portion and what they are made with,” she said.

In all that Moore does, she is sure to give something back to the community. A percentage of her proceeds from her book and bakery sales go towards education and abused animal causes. She donates to the United Negro College Fund and school and community fundraisers.

Moore is an active member of the Rowan County Chamber of Commerce and Altrusa International of Salisbury, a community service organization. She has also participated in volunteer efforts to benefit Salisbury and shops at local stores.

She gives talks to young teenaged girls to help them deal with peer pressure, stay educated and avoid teen pregnancy. She even put together an etiquette manual to help girls know what to do in formal situations.

“I always feel if I made a difference in the life of one child, I helped one child,” she said.

That is what it is about for Moore — helping people. She donates to charities because she said she wanted to help people who are doing good things. She bakes, writes and gives her time because she said “people don’t do enough of that.”

“I never liked selfishness and I never liked greed. I always believe that the more you give, the better it can make a difference in the life of someone or something,” she said. “It’s just a matter of compassion.”

Moore had to close her storefront for financial reasons, but she is still operating the business online. She is working on new books and plans to open the storefront back up in the future.