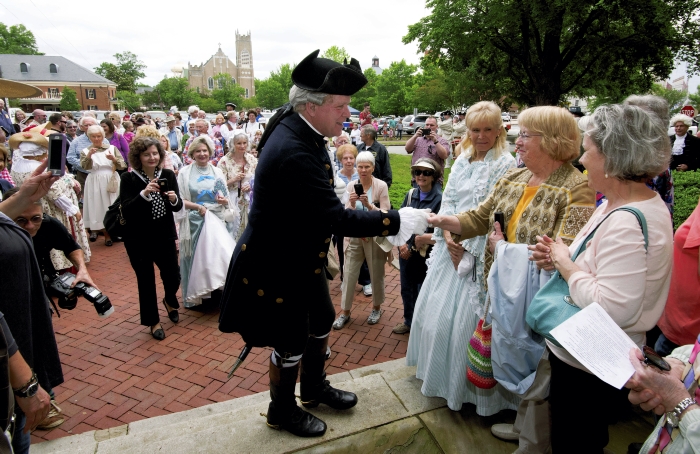 Lynn Bull as George Washington arrives in Salisbury to greet the citizens at the Rowan Public Library. The Rowan Museum Inc. has spent months making preparations for Saturday’s celebration of the 225th anniversary of the visit to Salisbury by the first president of the United States. JON C. LAKEY / SALISBURY POST

SALISBURY — Stepping onto the grounds of the Rowan Public Library on Saturday afternoon was like stepping back in time. On Saturday afternoon, the 200 block of W. Fisher St. was thronged with people in 18th century dress who wove music or thread, or fanned themselves in the bright May heat.

On the steps of the Rowan Public Library, President George Washington stood, buckles shining, to greet and address the people of Salisbury. The president, portrayed by Lynn Bull of Goldsboro, was the main event for Rowan Museum Inc.’s celebration of the 225th anniversary of the historic visit. Bull is a Revolutionary War and Civil War re-enactor who has portrayed historic persons across the U.S. and in Europe, but this is his first Washington.

The president, seen flitting through the 2016 crowd wearing a navy tricorn, last visited Salisbury on May 30, 1791. The visit was part of his Southern tour, shortly after the ratifying of fledgling America’s Constitution. During his one day stop, Washington stayed at the Yarborough House, which was located near the middle of today’s 100 block of North Main Street, was a guest at a tea with the ladies of the town and attended a ball held at the Hughes Hotel, near where today’s City Hall stands.

Though event organizers arranged to move the event indoors after predictions of wet weather earlier in the week, Saturday was a clear, hot day, and most events were moved back outside.

“I’m overwhelmed with the public outpouring,” Randy Lassiter, co-chair of the event and event coordinator said, “The rain did not dampen spirits.”

According to Lassiter, Saturday’s event had far more people attending than Salisbury had citizens 225 years ago. In 1791, Salisbury’s population numbered about 300. Lassiter said the museum had three goals for the event: to create awareness, appreciation and a hunger for history.

Special guests included Robert Mouland of Geigertown, Pa., who specializes in period instruments such as the hurdy-gurdy, fiddles, 18th century guitars, an Irish harp and the flageolet.

And anyone who attended one of the main events – signaled by a town crier ringing a hand-held bell – got an unexpected history lesson.

During his address to citizens, Washington answered questions about his horse, Prescott – who was left in a stable due to threat of thunderstorms – whether Congress should have term limits and how Salisbury fared compared to other towns he’d visited.

“Salisbury has shown a great deal of enthusiasm,” he said, adding that he found Salisbury’s historic reception more sincere than that of Charleston’s fanfare.

Washington answered questions about his campaign during the Revolutionary war, the surrender at Yorktown, Va., and his dream for the future of America.

“I know our country will survive and we will persevere,” he said during his address.

The all day event spilled out over several buildings, with story-time in the library, games in the former Wrenn House restaurant and musicians and artisans at First United Methodist Church. Washington himself roamed the block, stopping to greet the citizens of Salisbury – both those from 2016 and those who said they harkened from 1791. The day was full of cries of “Mr. President!”

In the afternoon, the president went to the Wrenn House, where he reenacted a tea held with the ladies of Salisbury. The tea was hosted by the wife of Maxwell Chambers, portrayed by Kim Edds.

“I am impressed that the people are so warm and welcoming,” Washington told the gathered party, “ . . . I wish I could stay here more than one day.”

During his 2016 farewell address, the president said that the day had been “filled with pleasure and awe.” As it did 225 years ago, Saturday’s celebration culminated in an evening ball, this time held on the second floor of the Rowan Museum. The ticket-only event raised proceeds for the museum. But Lassiter said the event itself was the museum’s gift to Salisbury.

“The Founding Fathers’ gift to us was the founding of the nation,” Lassiter said. “This event is the Rowan Museum’s gift to the people of Rowan and beyond.”