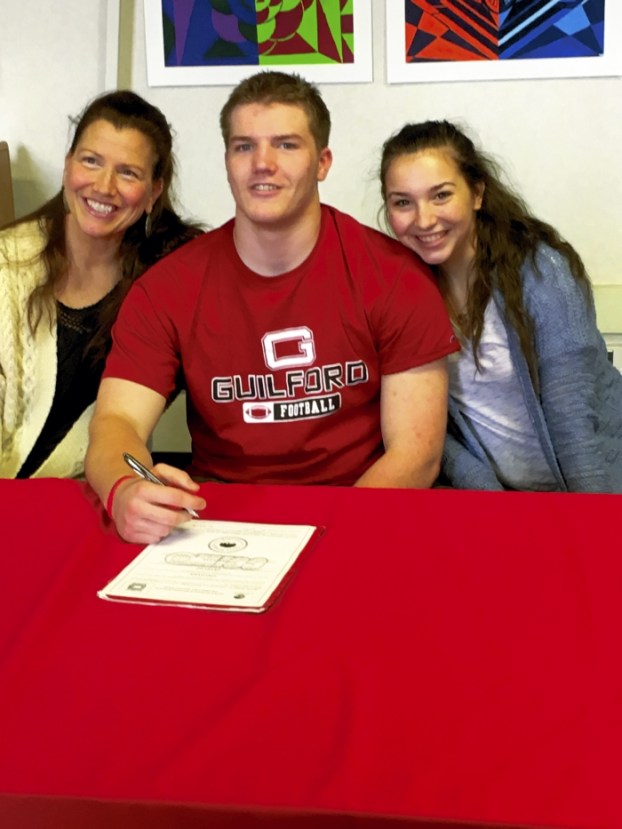 Submitted photo ... Salisbury High’s Brendan Bourque has committed to Guilford College in Greensboro, to play both football and lacrosse. He is shown with his mother, Ann, left, and sister, Molly, also a student at Salisbury. Another sister, Kathleen, is a student at Loyola University in Baltimore.

SALISBURY — Not many high school athletes sign two sets of official letters to attend college and participate in athletics but that’s exactly what Salisbury High’s Brendan Bourque got to do.

Bourque committed with Guilford College to continue his education and to play two sports for the Quakers — football and lacrosse.

But Catawba College has had a lacrosse team since 1994 and Brendan’s dad, Peter Bourque, has been the Indians’ coach for the entire 23 seasons of that program.

So Brendan learned about lacrosse early, going to camps in the summer with his father and eventually found a spot on a club team out of Durham called the Hilltoppers.

One of the Hilltoppers’ assistant coaches is Nate Bates, also an assistant at Guilford. Bates has seen what the 6-4, 255-pound Bourque can do with a stick in his hands.

In football, Bourque was the starting right offensive tackle for the Hornets last season and was the long snapper for most of the season. Long snapping could be in his future at Guilford, an NCAA III school in the Old Dominion Athletic Conference.

“It should be fun … I’m definitely excited about it,” said Bourque. “By playing both, I’m just doing what I like to do. It’s a challenge, but I feel that I’m up to it.”

Bourque said that the experience with the Hilltoppers was key to getting an opportunity to play lacrosse in college.

“There was great competition and a lot of good tournaments,” said Bourque. “A lot of college players come out that program and I could hold my own and feel that I did pretty well.”

Of course, Bourque reiterated that when it comes to lacrosse, his dad was the real difference.

“I am fortunate to have that opportunity — to have a dad that is a really good lacrosse coach,” added Brendan. “He taught me the game. He helped coach the Hilltoppers and we broke down my performance after each game, so that’s how I improved my game.”

Brendan visited Elon and Delaware but is going to his father’s alma mater. Peter was an outstanding four-year lacrosse player at Guilford, before graduating in 1988. Peter has coached in 328 games at Catawba and his teams have won four championships.

Last season on the gridiron, Bourque and guard Marquise Peele anchored the right side of the Salisbury offensive line.

“Marquise and I worked well together and it was an experience I wouldn’t trade for anything,” said Bourque. “High school football is great and you have to play it in order to know what it’s like.”

He said that the game that sticks out the most was the season finale last year at North Rowan. Despite the loss in “the worst playing conditions we’d seen, we did what we could, and all of the seniors really left it on the field. It was a heart-breaker.”

Bourque played jayvee football at Salisbury as a freshman and sophomore before taking a year off from football to concentrate on his academics. He threw the shot put and discus in track as a junior and was good enough to start in football when he returned last fall.

“Brendan’s a great kid,” said Salisbury football coach Ryan Crowder: “Honestly, had he played as a junior and gained some experience, he would have been that much better last year.

“But he’s a good-sized kid and he became a starter as soon as he came back to football,” continued Crowder. “And he did a good job long snapping except when he was playing through a shoulder injury. But once that healed, he won his job back there too.”

Bourque said that he was recruited by Guilford offensive line coach Brad Davis and “he’s excited about having me.”

And Guilford will have an outstanding, senior long snapper this fall who Brendan hopes to learn from and possibly follow in his footsteps in 2017.

Bourque is already hitting the Guilford football summer workout plan at the Hurley YMCA with fellow Guilford recruit Shane Barber, who played at West Rowan. Bourque and Barber plan to be roommates this fall.

“I went to one of Guilford’s spring practices and the team had good energy,” said Brendan. “It seems like a big family and I’m excited and blessed to be a part of it. But my parents, coaches and close friends pushing, put me in this position … along with God.”

At Guilford, Brendan plans to major in either business, exercise science or sports management.