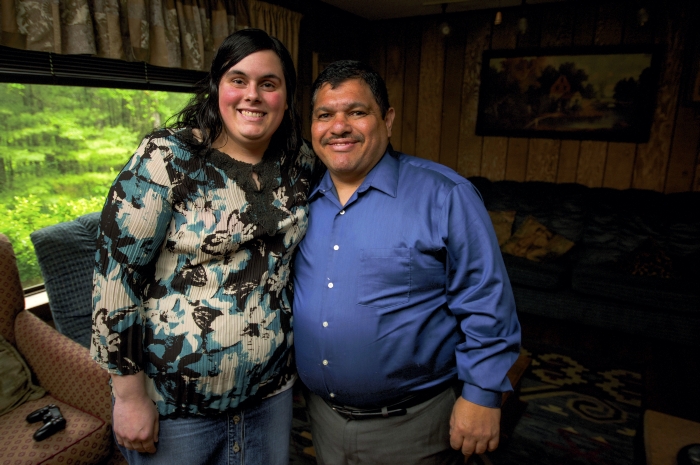 JON C. LAKEY / SALISBURY POST Gladys Vanhoy and Harold Mollinedo are getting married. The couple started dating not long after Gladys' started working at Rowan Vocational Workshops where Mollinedo works. Vanhoy, who doesn't come from a big family, will soon become part of a much larger tight knit family. Tuesday, May 17, 2016, in Salisbury, N.C.

SALISBURY —  Their courtship hasn’t been exactly what you might expect.

Harold Mollinedo and Gladys Vanhoy consider their first date as breakfast at the local IHOP. John Williams, then director of Rowan Vocational Opportunities, was there with them. So was Harold’s sister, Evelyn Medina.

Much earlier, the couple had met at the workshop, and for Harold it was pretty much love at first sight. Gladys, who has a knack for remembering dates, says it was May 5, 2014, the day she started working with the agency that provides jobs for adults with disabilities.

Since Gladys didn’t have the same attraction to him at first, Harold says he took things slowly and made sure they could be friends.

Come next Saturday, Harold and Gladys will marry in the chapel at St. John’s Lutheran Church. It will be a joyous celebration for both Harold’s large family and the St. John’s congregation, both of whom spent more than a year planning for this day.

“This town is amazing — the community,” says Medina, owner of the Mean Mug coffee shop on South Fulton Street. “And I don’t think we could have done this without the help of St. John’s.”

Gladys has picked out her wedding dress and shoes. A cake is ordered. For the reception, the fellowship hall at St. John’s will be beautifully decorated and include fresh-cut flowers.

Next Saturday’s wedding will include a couple of traditions from Guatemala, Harold’s native country.

In the roping ceremony, a godparent will tie a silver rope around the necks of the couple in a figure “8,” yoking them together.

In addition, Harold’s nephew Samuel will carry to them gold coins in a box, and Harold will give those coins to Gladys, signifying he will care and provide for her.

“I’m not nervous,” Harold assures everyone. He reminds his family that he gave Medina away at her wedding.

Evelyn, who has always wanted the best for her brother, thinks he has found a soulmate in Gladys.

“She looks out for Harold,” Evelyn says. “She cares about Harold, and she’s out to do good for him.”

Gladys, who has been in foster care and group home situations for much of her life, goes from essentially no family to being part of Harold’s large, extended family. They will live with his mother, whose house is only about 300 feet from Evelyn’s home.

“This is a very special thing for Gladys,” says Catherine Soderberg, her life coach from St. John’s, “because this is her family now.”

Things have never been easy for Harold Mollinedo. He is older than his sister Evelyn by 18 months, and some of her earliest memories as a child are of making sure he was taking medicine for his epilepsy.

They were in Guatemala at the time. In a Third World country in the 1970s, Evelyn says, a diagnosis for epilepsy wasn’t always the first thing that came to mind.

“They didn’t know if he were possessed or what,” she says of when Harold would have a seizure. Her father took his young son to different churches at first, asking congregations to pray for Harold.

Though eventually diagnosed, the epilepsy took a toll on Harold and his educational abilities. He learned as much as he could, Evelyn says, but his skills never progressed past an elementary school level.

“You make your peace with a lot of stuff,” Evelyn says, describing how difficult it was to see how things were being written off for Harold as he grew older.

Their family moved to California when Harold was 8. By age 9, he was participating in Special Olympics, something he has kept up throughout adulthood. In the States, his epilepsy was better controlled, but now he’s also dealing with diabetes.

After high school, Harold began working at a place in California similar to Rowan Vocational Opportunities here. He also became heavily involved in the Pentecostal church the family was attending.

Meeting people and inviting them to witness with him came easily for Harold.

“Harold has never met a stranger,” Evelyn says. “Everybody is a friend. He has always found a way to share the gospel with people in ways you wouldn’t expect. He’s a candid spirit.”

Harold also plays the conga drums and was part of his church’s music in Los Angeles.

The family moved here in 2006. Rowan Vocational Opportunities proved to be a perfect fit for Harold, and he often has accompanied spokesmen for the agency when they make annual United Way presentations to companies.

Through placement with RVO, both Harold and Gladys work at the Shoe Shoe warehouse. Harold mostly cuts up boxes and sometimes joins Gladys on the cleaning crew.

Most of Harold and Gladys’  “dating” happened during the hours they saw each other at the vocational workshop.

They also were in the Action Club together. Harold has held most every office in that group — president, vice president and secretary, a position Gladys also was in once.

They took an Arc of Rowan field trip together to Blowing Rock and attended a special population prom as a couple. They meshed well.

“He was nice,” Gladys says, “and kind of seemed like he would be a good man.”

Harold liked the way Gladys treated him and how easily they got along. In other words, he says, she could put up with him.

It was March 22, 2015 — again, Gladys has a thing for dates — that Harold asked whether she would consider marrying him. “He said, ‘I’ll give you time to think about it.'”

When Harold told his family he wanted to marry Gladys, Evelyn’s says her first reaction was, “we’ll see how long this lasts.” But he was soon asking his mother to take him to a store to buy a ring.

“I said, ‘Let’s make a plan,'” Evelyn says, and the family and their church started using May 2016 as a target date. “St. John’s has been an incredible resource — I’m so thankful,” Evelyn adds.

Gladys had never been baptized, and Evelyn wanted both Harold and Gladys to become members of the church and also take counseling together.

The Rev. Rhodes Woolly, senior pastor at St. John’s Lutheran, asked Soderberg to be Gladys’ life coach, essentially taking Gladys under her wing. It was the start of a growing friendship.

There’s a significant age difference between Harold and Gladys. He’s 49, she’s 29. It’s the first time either has been close to marrying anyone.

“Gladys is a very gentle, sweet person,” Soderberg says. “She doesn’t assume anything, and she’s grateful for everything.”

When the idea of being baptized was brought up, Soderberg didn’t even know whether Gladys was a Christian. They talked  about what baptism is and what communion represents. Gladys had never taken communion, either.

Soderberg found a tabbed, easy-to-read Bible for Gladys and also enrolled her in a literacy program, which she has been attending twice a week at Rowan Public Library.

Soderberg learned that Gladys had never baked a cake, and together they made a cherry cheesecake. They talked a lot about cooking and the kinds of meals Harold would need as as diabetic.

One of Gladys’ new books is a cookbook.

Gladys and Soderberg also had conversations about what family members do for each other, because Harold’s family was going to be something totally new for Gladys.

Since Harold’s proposal 14 months ago, Gladys has done a lot with his family. She has gone to the beach, attended church with them and shared in all the holidays.

The more she has come to know Gladys, the more Evelyn believes a miracle has happened in her brother’s life.

Gladys is ready for her big day and a new life with a good man beside her.

Harold is ready, too.

And not a bit nervous.