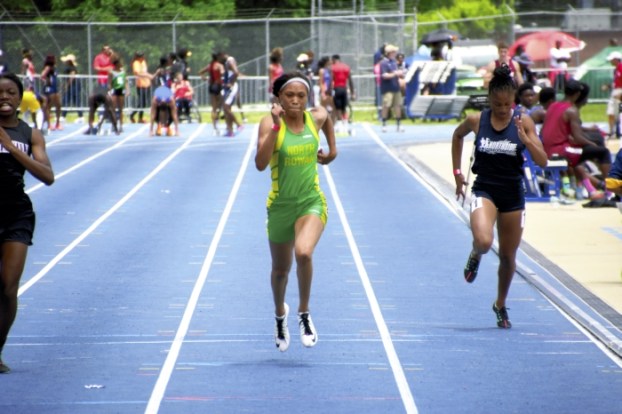 North Rowan junior Payton Russell won two individual state titles on Saturday at the 2A Track and Field State Championships in Greensboro and helped a relay team take gold in a third event.
Russell won the 200 meters for the first time at North Carolina A&T’s Irwin Belk Track and defended her state title in the 400. Russell also ran the first leg on North’s winning 4×400 relay unit.
Russell’s big day helped the Cavaliers take third place with 41 points. Burlington Cummings ran away with the title with 123 points. High Point Andrews got a first place late in the long, weather-plagued day in the triple jump and took second with 45 points.
“Payton had a tremendous day,” North Rowan coach Phillip Bush said. “The team had a very good day, but I wish we could’ve done a little better. We were hoping we could get second place.”
Russell’s day started with a fifth-place finish in the 100, the same finish she had last year. She was clocked in 12.44 seconds.
Russell’s win in the 400, her favorite event, came next. She ran 56.44, a shade off the blazing 55.7 time she ran in 2015 to set the meet record.
Russell added a victory in the 200, an event in which she placed second last season. Her time was 24.83.
Russell closed her day with the 4×400 victory. Russell always gets the Cavaliers started in that event. She was followed by junior Brianna White and senior Tabitha Tulloch, and sophomore Rochelle Bowman finished. North won in 4:07.76.
“We ran our best time in the 4×400,” Bush said. “The girls ran a great race.”
Russell, White and Bowman ran on a team that finished third in that event in 2015.
Russell accounted for 24 points individually, and North added 10 for the relay win.
The Cavaliers’ other seven points came from White, who placed in three individual events. She was sixth in the 100 hurdles (15.76), sixth in the 300 hurdles (48.77) and eighth in the high jump (4 feet, 10 inches).
North had hoped for additional points in relays and throws, but the Cavaliers had to settle for third.
“We had a good year,” Bush said. “We won a lot of championships, and we’ll have a good team again next year.”
•••
In the 2A boys meet, the state title went to North Brunswick for the third straight year. Forest Hill was runner-up.
Salisbury’s boys scored a point when D.J. Alexander took eighth place in the shot put with a throw of 44 feet, 7.5 inches.
•••
A.L. Brown sophomore sprinter Cambrea Sturgis was strong in the 4A girls meet.
Sturgis placed second in the 200 (24.04) and third in the 100 (11.73).

Prep Track and Field: 3A State Championships held in Greensboro