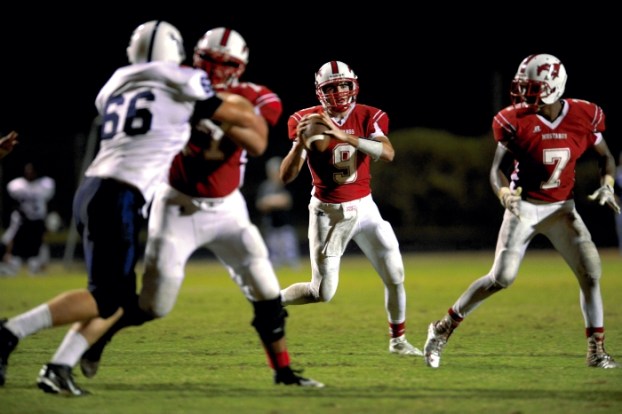 Wayne Hinshaw file photo/for the Salisbury Post ... In a file photo from 2014, East Rowan’s Sawyer Kimmer (foreground) blocks for quarterback Samuel Wyrick (9) during a game against Hickory Ridge. Kimmer has decided to continue his career at Limestone College this fall.

GRANITE QUARRY — At 6-foot-4, 285 pounds, East Rowan’s Sawyer Kimmer looks like a Division I guy, so Limestone, a young Division II program in Gaffney, S.C., has to be thrilled to sign him.
Limestone offered the strapping offensive tackle a scholarship back in September, but he was exploring lots of options, including not playing college football at all.
“I was considering getting down to about 225 pounds and going into the military,” Kimmer said.
Limestone is glad Kimmer didn’t stop going to the cafeteria.
Limestone decided to make a coaching change in March, elevating defensive coordinator Drew Anthony to interim head coach. Kimmer still hadn’t signed, so Limestone, which will be playing only its third season this fall, came after him hard for a second time.
“I went back down there for a visit not long ago,” Kimmer said. “The first coach (Bobby James) that offered me was gone, but it seemed like a good fit for me. The oldest guys there will only be juniors, so there’s a lot of opportunity for young guys.”
Kimmer was a three-year starter for the Mustangs and was an all-county senior.
He was the blindside tackle for East — right tackle when lefty Max Wall was playing quarterback and left tackle when right-handed Tate Houpe was East’s QB.
Kimmer impressed enough coaches that he’ll be playing in the East-West All-Star Game in Greensboro on July 20.
“That’s a big honor for him and he did a tremendous job for us,” East coach Kenneth McClamrock said. “I think he’s found a school that he’s very comfortable with, and he should be a very good student-athlete for them.”
Limestone is less than two hours away. Kimmer sees that as a big plus. Limestone also plays home games at “The Reservation,” a nice 8,250-seat facility that is the home for Gaffney High’s football team. That’s another plus.
Limestone won only two games against legitimate opponents in 2015, beating Brevard and Kentucky Wesleyan, but the Saints also played close games with Catawba (a 10-3 loss) and Wingate (a 17-12 loss) on back-to-back weeks in October, so the Saints are making progress.
While Limestone isn’t a South Atlantic Conference member, it will basically play a SAC schedule in 2016. The season starts with Shaw and Benedict and ends with North Greenville, but in between, Limestone will play the eight SAC schools, including an Oct. 8 trip to Catawba’s Shuford Stadium.
Kimmer knows a lot about one of his new teammates, linebacker Logan Stoodley. Stoodley was a senior at rival West Rowan when Kimmer was a freshman.
While Kimmer looks like a guy who can help Limestone right away, he won’t be upset if he’s redshirted in 2016.
“You never know what might happen if I have a good camp, but I’m kind of hoping to redshirt,” Kimmer said. “That would give me a year to get really big.”
A redshirt year would fit right in with Kimmer’s academic goal — a master’s degree in business administration.