NASCAR couldn’t be happier with competition 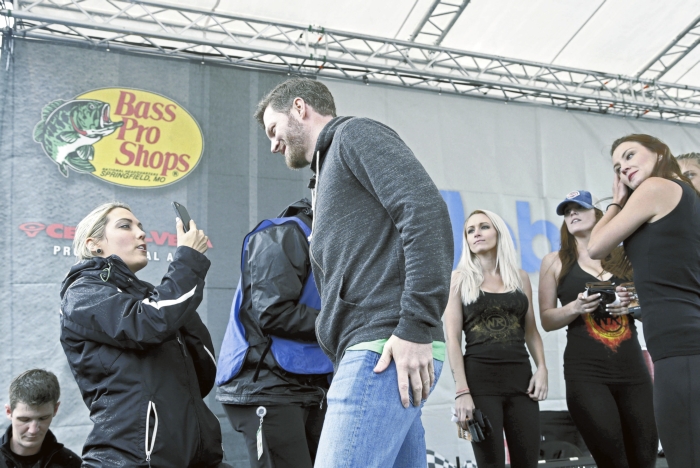 AP Photo/Gerry Broome... Dale Earnhardt Jr. pauses after speaking with fans at the Charlotte Motor Speedway in Concord on Friday afternoon. There was limited fun at the speedway, as rain caused havoc with the All-Star Weekend festivities on Friday.

Maybe the TV ratings or attendance numbers don’t show it, at least not yet. But NASCAR is having one of its best seasons on the track a third of the way through its marathon schedule.

A dozen drivers have a legitimate chance to win on a given weekend, the finishes are closer than they’ve been in years, and green-flag passing has become the norm throughout races.

That’s why NASCAR officials are excited about the state of the sport, and optimistic about its future. This weekend is another opportunity to showcase where the sport is with the Sprint Showdown and the All-Star race on Saturday at Charlotte Motor Speedway. (The Sprint Showdown, along with the Camping World Truck Sereis race, was postponed Friday by rain and rescheduled for Saturday).

“If you look at the entire group of races, it’s some of the best racing we’ve seen,” said Richard Buck, the Sprint Cup Series managing director. “The great thing about it is that it is touching all types of people. We see a lot of good racing out there and I think fans do to.”

Competitive races is something that NASCAR needs in this transitional time, when the sport must broaden its fan base to the best of its ability. The sport is essentially redefining itself after it grew exponentially in the mid-1990s and then went through a downturn like most sports during the recession.

TV ratings remain an issue with several races going from commercial broadcasts on Fox to cable channels such as Fox Sports 1 and NBC Sports Network. Signs, though, suggest the sport has a promising future and it begins on the track.

Eight of the first 12 races have ended with a margin of victory of less than 1 second, the most since 2010. The average margin of victory has been .877 of a second, including two races — Daytona and Phoenix — decided by .010 of a second. And, earlier this month at Talladega Superspeedway, there were 213 green-flag passes for the lead.

This is the type of racing that NASCAR wants and hopes will draw more fans into the sport.

“We get a report card every weekend on how we do and what we can do to make it better,” Buck said. “And the biggest thing we can do is have great racing because that’s what makes our sport great.”

It starts with the drivers, of course. And NASCAR has plenty of talent in the garage.

Yes, Jeff Gordon retired after last season, Tony Stewart is in his final season, and veterans such as Dale Earnhardt Jr., Jimmie Johnson and Matt Kenseth are in their 40s. But there is a fresh wave of young talent with potential, beginning with Chase Elliott, Ryan Blaney and Kyle Larson.

“The fun part of all of this is seeing existing talents like Kenseth win races like he did last weekend at Dover, and then these young talents who have come up the ranks,” Buck said. “It just covers the entire gamut.”

Parity in the sport is something that is being viewed as a good thing, too. Hendrick Motorsports, Joe Gibbs Racing and Team Penske are known as the powerhouse teams that traditionally put drivers in Victory Lane.

But Stewart-Haas Racing shouldn’t be counted out, and neither should Furniture Row Racing. Furniture Row provides a throwback feel as a single-car team with Martin Truex Jr. contending for championships.

Then there are teams such as Richard Childress Racing and Chip Ganassi Racing that have a mix of young and veteran talent capable of winning on a given weekend.

“This is the toughest competition in motorsports and it’s great to see different teams have different plans and ways to go about their business,” Buck said. “And there are so many good stories in the garage.

“Like Furniture Row, a single-car team that is based in Colorado and their approach is very methodical. They have all the elements and they’re perfect proof in the making that you can succeed as a single-car team.”

The needle appears to be pointing in the right direction for NASCAR, and Marcus Smith, the president of Speedway Motorsports Inc. (which owns Texas Motor Speedway and Charlotte Motor Speedway, among others) alluded to that last month during TMS’ spring race weekend.