Larsen’s songs charm everyone at Night on the Stage 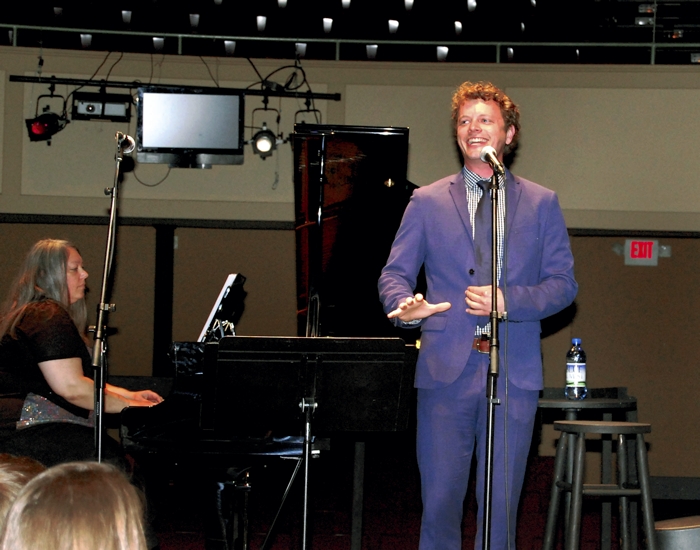 With a tender tenor voice, David Larsen charmed the patrons at Piedmont Players’ annual fundraiser, Night on the Stage.

Larsen, who has appeared on Broadway and in touring productions, has stared in “The Book of Mormon,” “Hands on a Hardbody” (which Piedmont will produce this season), “Billy Elliot” and more, and has the perfect voice for theatrical musicals, sweet and deceptively strong.

He had the patrons in the palm of his hand by the time he finished his set with “Stronger” from “Hands on a Hardbody.”

He was accompanied by Salisbury’s own Virgie Taylor and joined for a couple of numbers by fellow Broadway performer Emily Dupre.

Andy Abramson, Piedmont Players  board chair, greeted the full house for a night of dinner and music, along with raffles and a silent auction. Children easily convinced people to Fund a Need and buy tickets for prizes that included a trip to New York.

Teens served the meal with grace and precision.

Many of Salisbury’s philanthropists, from Paul Fisher to Tom Smith and Fred Stanback, were there, along with regular patrons of the arts. Abramson made sure to thank all the sponsors and staff. The event, which will also be held Saturday, was sold out Friday.

Abramson praised those attending as the people who make Salisbury remarkable. “People here give and give and give…. It’s a testament to the people and organizations we have.”

Larsen stepped in for Tony-award winner Bryce Pinkham, who had a last minute schedule change.

Larsen shared his great voice and talked a little about each song he performed, from sad to sweet, serious to silly, with familiar songs from the Beach Boys and Carole King thrown in.

Piedmont Players Director Reid Leonard, before Larsen took the stage, announced the new season for Piedmont Players at the Meroney and the Norvell. He estimated between 17,000 and 18,000 children saw shows at the Norvell this past season.

The Norvell season includes “Boxcar Children,” based on the book series of the same name; “Elf Jr,” based on the movie, “Elf,” already has a corporate sponsor in Crescent Construction Services; “A Midsummer Night’s Dream” will be performed in a representation of the old Globe theater; “Tales of a Fourth Grade Nothing” will be revived, and then, “Bring It On,” a musical about battling cheerleading squads, will close out the Norvell season.

At the Meroney, the first show is “Peter and the Starcatcher,” about how Peter became Peter Pan; “Act One,” which has 50 characters, is next; followed by the musical “Sister Act,” based on the popular movie starring Whoopie Goldberg. The classic “Tom Jones” will provide plenty of swordplay and finally, Roy Cooney’s farce, “Tom, Dick and Harry” will wrap it all up.

The performances will offer something for everyone.

Larsen began his set with the familiar “Oh, What a Beautiful Morning” from “Oklahoma,” with some in the audience singing along.

He said he loved to do songs that were lyric-driven melodies. He told how he persevered through plenty of rejections to finally get a part on Broadway and how he fought to get out of the ensemble and into leading roles. When “Billy Elliot” came along, his audition “sucked,” but he worked hard and earned a role. “I felt like I was finding myself at the same time.” He worked in that show for two and a half years, eight shows a week, then later landed a part in “American Idiot,”  based on songs by Green Day.

At one point, Larsen called Dupre to the stage to sing with him, including songs from “Little Shop of Horrors” and “Will You Love Me Tomorrow.”

Larsen’s bright spirit and sincerity quickly won the audience over and he earned a standing ovation for his musical selections. He seemed to be having as much fun as everyone else and thanked all involved for bringing him here for this special night.