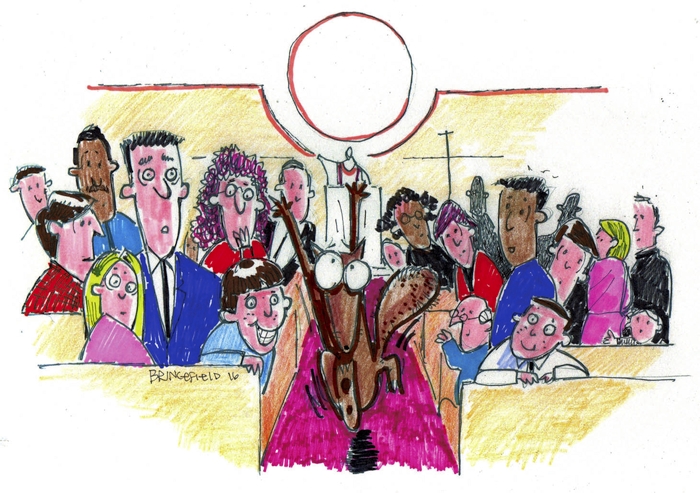 The concept of Pentecost has always been a bit confounding to me, an exotic notion that doesn’t quite mesh with my own faith life. I’m aware that some take the passages quite literally and even aspire to speaking in tongues as a sign of being overcome by the spirit.

Serving as liturgist last Sunday at First United Methodist, I read the Pentecost passages – the part about a mighty wind, tongues of fire and so forth, which always gives me pause.  Later, Pastor Mark Conforti’s sermon, compelling as always, made the concept a little more accessible, with (believe it or not) a reference to lyrics from an England Dan and John Ford Coley song.

A little later in the service, I was at the lectern reading a prayer I had prepared. That’s when I caught wind of whispering in the rows in front of me. Not a mighty wind, just a little one.

I’m not one to fuss about whispering in church because I’m guilty of it too, but we all typically refrain from that during prayer.

The whispers continued. Was my prayer of intercession inappropriate? I was getting paranoid and losing focus.

That’s when I glimpsed something dark creeping across the carpet.

Was that a bushy tail?

Like some cartoon character with ADD, I wanted to shout, “Hey look! A squirrel!” But on second thought, that seemed imprudent. Too cheeky for church.

I stumbled through the rest of the prayer, trying to keep an eye on the unpredictable creature below me and recalling a coworker’s tale of how a squirrel had scampered up one side of her body and down the other before she had time to scream.

At the end of my prayer, for the enlightenment of those who didn’t yet know why my delivery was so choppy, I added, “And Lord, please help that squirrel find its way safely out of the church.”

I think that’s when Pastor Mark realized what was up, and soon everybody else did too. No longer diffidently exploring the sanctuary, the squirrel leaped into the chancel area as though possessed, past the organ being played by a remarkably unflappable Matthew Brown. At the altar, the squirrel paused for a moment of solemn reflection and then caromed out of my view for a bit – which made me really nervous – before reappearing, exploding into motion toward my lectern. He swerved at the last minute and flew back down the chancel steps.  I caught the eye of the young acolyte a few times during this furry frenzy, and neither one of us could wipe the grins off our faces.

At some point in the hubbub, Pastor Mark slipped out, possibly to make sure the Small Furry Mammal Committee had been apprised of the situation.

I think the squirrel made his escape during the offering, perhaps embarrassed because he had nothing for the offering plate. I am told he eventually escaped through the fellowship hall.

Afterward, we early service folks were giggly and squirrel-dazed, sort of like the people I’d just read about in Acts 2 who were accused of having had too much wine at nine in the morning instead of being high on the holy spirit. A few people mentioned that we’d just experienced a “Mississippi Squirrel Revival,” a reference to a Ray Stevens song from some years back.

I looked up the video later and the chorus goes like this:

The day the squirrel went berserk

In the First Self-Righteous Church

In that sleepy little town of Pascagoula

It was a fight for survival that broke out in revival

They were jumpin’ pews and shouting, “Hallelujah.”

“Self-righteous” doesn’t describe my church at all, and nobody fought.

But the squirrel was a breath of fresh, wild air blowing through our church. And it felt oddly uplifting to experience something a little crazy together, a squirrel ricocheting wildly around a church on Pentecost Sunday as if overtaken by the spirit. Like tongues of fire, that sort of thing doesn’t happen every day, and maybe that’s the point.