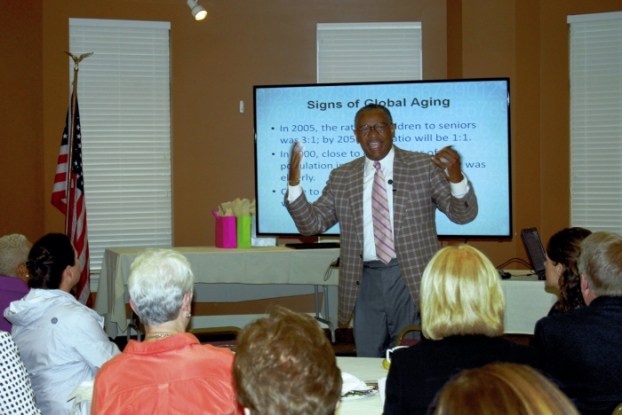 Amanda Raymond/Salisbury Post James Johnson, a professor from UNC-Chapel Hill, was the keynote speaker for the Rowan County Chamber of Commerce's Power in Partnership Breakfast on Thursday. He talked about the world's aging population and how changes will have to be made to accommodate it.

Chamber speaker: We must prepare for aging population

SALISBURY — James Johnson from the University of North Carolina at Chapel Hill spoke to a sold-out crowd on Thursday about the world’s aging population, also known as “The Silver Tsunami.”

Johnson was the keynote speaker for the Rowan County Chamber of Commerce’s Power in Partnership breakfast.

The Community of Nonprofit Organizations sponsored the breakfast.

The breakfast also served as the graduation for the 21 members of this year’s Leadership Rowan Class.

Johnson is the William R. Kenan Jr. Distinguished Professor of strategy and entrepreneurship at UNC Chapel Hill. He is also the director of the Urban Investment Strategies Center at the Frank Hawkins Kenan Institute of Private Enterprise.

He researches subjects like community and economic development, the effects of demographic changes on the workplace and interethnic minority conflict in advanced industrial societies. He has a doctorate degree from Michigan State University and a master’s degree from the University of Wisconsin at Madison.

He said because of modern medicine and technology, people are living longer.

Johnson said individuals from the age of 45 to 64, the baby-boom generation, was the fastest growing age group from 2000 to 2010. The 65 and older age group came in second place.

Along with the population growing older is declining fertility rates. Johnson presented a statistic that stated deaths exceeded births among U.S. non-Hispanic white people in 2011 for the first time in 100 years.

Johnson said Salisbury and other places around the world need to begin preparing to accommodate the aging population. Though people are growing older, many are staying active and involved in the workplace. Johnson said 63 percent of Americans plan to work during their retirement.

To start with, Johnson said businesses can take advantage of the aging market, which amounts to $17 trillion globally and $3 trillion in the U.S.

Johnson said more boomers are working past 65, they are more likely to purchase a car than other generations, they watch more television than millennials and are major consumers of Apple products.

Quoting Jody Holtzman from AARP, Johnson said, “You’d have to be an idiot to ignore this kind of money.”

He also mentioned that more people are becoming encore entrepreneurs, or entrepreneurs at a later age. Johnson said 50 percent of businesses started by entrepreneurs who are 50 and older were still in operation 5 years later.

“We talk about encore entrepreneurs as having double-E SP — experience, expertise, seasoned judgment and proven performance,” he said. “They are leveraging their expertise that they’ve had in the marketplace, leveraging the connections and ties and that leads to business success.”

Johnson said changes would have to be made to things younger people take for granted. For example, the aging population will need longer walk times at crosswalks, senior-friendly street signs and senior playgrounds and fitness parks.

Johnson even said that Trinity Oaks, where the breakfast was hosted, was not senior-friendly. Some of the chairs did not have arms and the tile floor was slippery.

“Everything in the built environment has to change to accommodate the aging population,” he said.

In the coming years, Johnson said people will start to include senior-friendliness in their evaluation of cities.

“That’s going to be a game-changer for all of us,” he said.

The graduates of this year’s Leadership Rowan Class were:

Burger King on Jake Alexander to reopen this summer

SALISBURY — The Burger King restaurant that caught on fire in February will be back open soon, according to a... read more