Teen parents, graduating high school, prepare for the next step 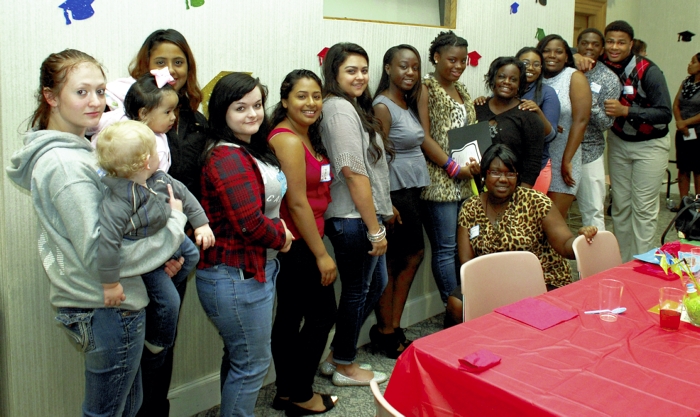 Mark Wineka/ Salisbury Post Some of the teen parents who will be graduating high school seniors in coming weeks pose for a photograph while attending the Families First-NC Inc. luncheon and awards program Thursday. The teens participated in the Families First's Good Beginnings for Teen Parents program.

SALISBURY — Talita McCain looked out on the faces of teen parents in her audience Thursday and said, “This used to be me.”

Today, McCain is an administrative assistant for the Country Club of Salisbury and a longtime homeowner. She was a double major and star volleyball player at Catawba College, and outside of her duties at the country club, McCain is the varsity volleyball coach for North Hills Christian School.

Her son, Tion, is a business administration major at N.C. Central University.

But during her freshman year in high school at North Rowan, McCain became a mother.

“It is a life-changing experience,” McCain told the teen parents in the room. “Nothing is the same anymore. It is no longer about you. You’re not the priority.”

McCain was guest speaker Thursday at the luncheon and awards ceremony for 22 high school seniors who participated in the Good Beginnings for Teen Parents program, sponsored by Families First-N.C. Inc., a United Way agency.

Donaldson’s son, Daevon, will be 2 years old Sunday. She plans to enroll at Livingstone College as a culinary arts and business major.

Maria Pelaez of South Rowan High School accepted the other scholarship, named in honor of the late Edith Alcorn.

Pelaez plans to attend Rowan-Cabarrus Community College in hopes of becoming a registered nurse. Her daughter Marianny, is 2.

Donaldson said having a child and going to school proved to be “extremely tough, because he doesn’t like to sleep.” She has received strong support, Alicia said, from her grandmother.

Jeannie Sherrill, executive director of Families First, said she, the rest of her staff and board members look forward each year to the senior luncheon and awards ceremony for the teen parents.

“Everybody in this room has an investment in your future,” Sherrill told the soon-to-be graduates. “… All of us are your biggest cheerleaders.”

Historically, the Good Beginnings for Teen Parents program has a 100 percent high school graduation rate among its participants, and about 64 percent go on to post-secondary education.

Overall, the program had about 50 participants in grades nine through 12 this school year, according to O’neal. She is the backbone of Good Beginnings, holding two sessions a month in each of the county’s high schools to help teen boys and girls who are parents receive their high school diploma or GED.

In the school sessions, O’neal goes over basic life skills and provides information on child development. Beyond that, she organizes field trips to colleges, makes home visits and drives the teens to places such as the Division of Motor Vehicles, job interviews and doctor appointments.

As she talked with the teen parents, McCain had several messages:

Pursue your education beyond high school. Set your expectations high in being a role model for your child. Know that every decision you make from here on out affects your child. Think before you act, such as when you’re preparing to post something on social media.

“Do you want your child to see that someday?” McCain asked.

McCain also wanted the teen parents to know their dreams have not been derailed by having a child so young. Things will be more difficult as a teen parent, she said, and there will be days they will feel like giving up, “but you can’t quit. You can’t give up.

“It’s about that child.”

McCain said the realization things weren’t about her any longer was evident as soon as Tion was born. His birthday and hers were close together, and when her parents came into her room with gifts right after he was born, McCain assumed the presents were for her.

When she opened up packages of one-sies, baby sleepers and socks, McCain said, it was her first important clue “it’s not about you any more.”

Even though she was a teen mom, McCain refused to give up sports at North Rowan High, where she became a five-sport athlete. “When I went to practice, my son went, too,” McCain said, recognizing the strong support system she had at school and home.

McCain was a runner on state indoor and outdoor championship teams for coaches Brian Mills and Robert Steele. She played on a North Rowan High basketball team that under Coach Gary Atwell made the state semifinals her senior year.

McCain was runner-up for Rowan County Female Athlete of the Year during her senior year in 1997.

Making things tougher for McCain was that her baby’s father ended up going to prison for eight years. She spoke about the difficulties at times in taking her son to see him.

To the father’s credit, she said, he earned his GED in prison, went on to get a technical degree and has become “an upstanding guy” today.

It never occurred to McCain she would not attend college, because that was the expectation of her family, even though she had a child.

“I thought that was what I was supposed to do,” McCain said.

At Catawba College, McCain pursued a double major and graduated with a degree in recreation and physical education. Her first job out of college was with the Salisbury Parks and Recreation Department, where she worked 11 years.

By age 26, she owned her own home, where she still lives today. McCain had worked at the Country Club of Salisbury as a waitress in both high school and college, so when her current position became available she returned there.

“The only thing that can stop you, is you,” McCain told the teen parents.

For her senior project at South Rowan High, Yasmeka Howie followed the progress of students in Good Beginnings.

First Families’ fundraiser, “Flip Flops and Flamingos,” will be held at the Heritage Room off East Council Street at 5 p.m. Sunday.