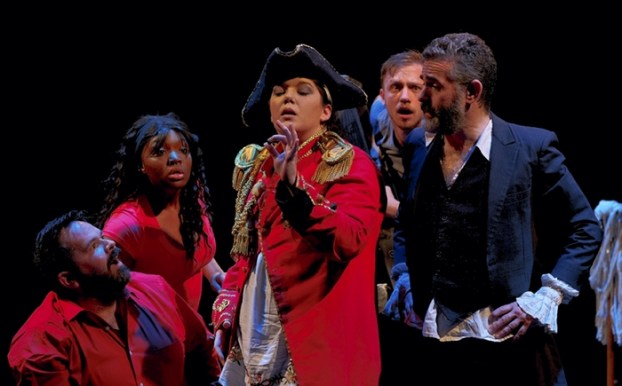 ‘Shipwrecked’ is a night of fabulous fun

What fun it is to be “Shipwrecked” with the five talented actors who tell “The Amazing Adventures of Louis de Rougement.”

Lee Street theatre’s family-friendly production is full of mishaps, adventure, miracles and more. There’s plenty of laughs and none of those rely on bathroom humor. Plus, there’s so much energy on stage it’s contagious.

Bill Reilly is delightful as Louis de Rougement, a callow youth out for adventure, then a tribal chief, then an old man and, perhaps, a charlatan. You’ll have to decide.

All four actors are on stage all the time, but Reilly, the storyteller, has an incredible amount of material to remember. He said after the opening night performance that it was wonderful to tell his story to an audience and to see their reactions. Reilly is a dashing gentleman with loads of enthusiasm. He can play all Louis’ moods, and does it with gusto.

But much of the time, you will find yourself looking at Ryan Miles, who completely inhabits the role of Bruno the dog, among many others. His dog is amazingly authentic. He’s got the sounds all right, even the movements. He also makes a lovely tea-drinking English woman and a stunning Queen Victoria.

And Beth Bentley is a commanding ship’s captain, charming as an aboriginal, sweet as Louis’ mother, and that’s just a few of her roles, as well.

Chris Eller has these looks that crack the audience up, whether he’s a pearl diver, a ship’s captain, a shipwrecked tribesman or a giddy young daughter.

Karina Moran plays the beautiful aborigine Louis loves, and a pearl diver, and a newsboy and another handful of roles.

The cast moves around constantly, simulating a hurricane, diving, swimming, crashing waves, drifting boats. And they do it with the simplest of props — hats, paper skirts, a mop, an old trunk. Almost everything on the set moves and has to be reset between acts and after the show ends each night. No credit was given for a props master, which is too bad. It may have been the stage manager, Katherine Brown.

The stage floor is painted as an ocean, with small beaches in the corners. and the wooden pallets and platforms serve as ships, beds, boats, everything. The trunks are full of props. Jars of pearls appear to glow from within. There is always something or someone to look at, to be momentarily fascinated by.

The story, without spoilers, is this: Sickly child Louis listens to his mother read “Robinson Crusoe” and “The Tales of Aladdin.” She won’t let him go outside, and as he grows, he longs to see the world beyond.

So he sets off aboard a ship of native pearl divers, with Bentley’s rough captain and the mascot, Bruno. Well. we all know that ships at sea are vulnerable. There be pirates out there, giant sea monsters, storms that whip wind, roil the ocean and pour torrents on the little men aboard.

It’s called “Shipwrecked” for a reason. Louis and Bruno wash ashore on a deserted island, somehow surviving on the rations from the boat and who knows what else. Louis rides the back of sea turtles in the ocean for fun.

One day, a broken catamaran appears, with three people aboard, natives who at first fear Louis, until Bruno performs his amazing acrobatics. Again, Miles is remarkable.

Chapters unfold as Louis and his friends get to know each other, finally making a sail for an island under a star, where he marries the Aboriginal woman in a funny little ceremony. Years of happiness later, he longs for England, but his tribal family is not interested.

In England, his story is a sensational. He’s famous! He’s rich! Everyone wants to know him!

Then the skeptics step in, and Louis is the victim of disbelief and doubt. The great man is, in essence, shipwrecked again.

But wasn’t it a wild adventure? Wasn’t it fun?

Everyone involved deserves praise, from director Louis R. Mountain to the evocative lighting design by Chris Speer, who also designed the glorious sounds, the best part of which may be the sea chantys that set the tone for the night.

Chelsea Retallic designed the multi-purpose costumes and Speer and Summer Eubanks designed the set. Craig Kolkebeck is the acting and movement coach.

Treat yourself to a night of “Shipwrecked: The Amazing Adventures of Louis de Rougement (as told by himself), by Donald Margulies. Doug Jones’ Nationwide office is the sponsor for this production, which continues tonight and Saturday and May 26-28 at 7:30 p.m. at Lee Street theatre. Children’s tickets are just $10. For ticket information, call 704-310-5507 or go to www.leestreet.org.

SALISBURY —  Two Rowan County government departments are gearing up for a move that will affect early voting for June... read more