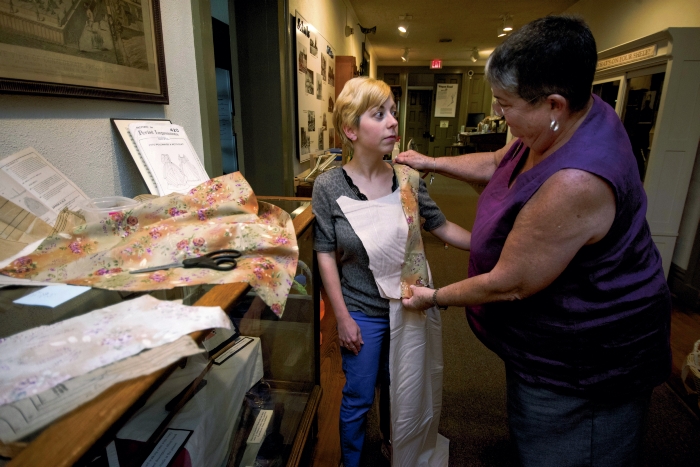 JON C. LAKEY / SALISBURY POST Kaye Brown Hirst (right) drapes the pieces of fabric on Tricia Denton Creel (left) at the Rowan Museum on Thursday. Hirst will sew together the pieces and make the gown for Creel to wear to the George Washington Ball on Saturday night. The Rowan Museum Inc. makes preparations for Saturday's celebration of 225th Anniversary of the visit to Salisbury by George Washington. The threat of rain has moved all of the activities indoors but the programs will continue. Thursday, May 19, 2016, in Salisbury, N.C.

While the forecast of rain has shifted times and locations around a bit for Saturday’s 225th anniversary celebration of George Washington’s visit to Salisbury, spirits have not been dampened for those getting ready for the activities, which will culminate in a ball Saturday night at the Rowan Museum. Randy Lassiter, co-chairman of the celebration, said the latest plan is to have President Washington ride in his carriage at 6 p.m., starting on South Main Street and ending at the museum on North Main Street, where a crowd will be waiting to greet him. That carriage ride will give Salisburians another chance to see the father of the country, portrayed by Lynn Bull of Goldsboro. Elsewhere during the day, President Washington will be welcomed to Salisbury and speak to citizens Saturday morning at Rowan Public Library. He also will be in attendance at two afternoon teas at the Wrenn House during the afternoon (12:30 and 2 p.m.), and Washington will give his formal farewell at 3:45 p.m. at First United Methodist Church’s covered drive. The day also includes craftsmen, artisans, militia, period musicians and Early American children’s games. Washington visited Salisbury during his Southern Tour on May 30, 1791. After his full day here, he stayed overnight before setting out for Salem early the next morning.

Teen parents, graduating high school, prepare for the next…