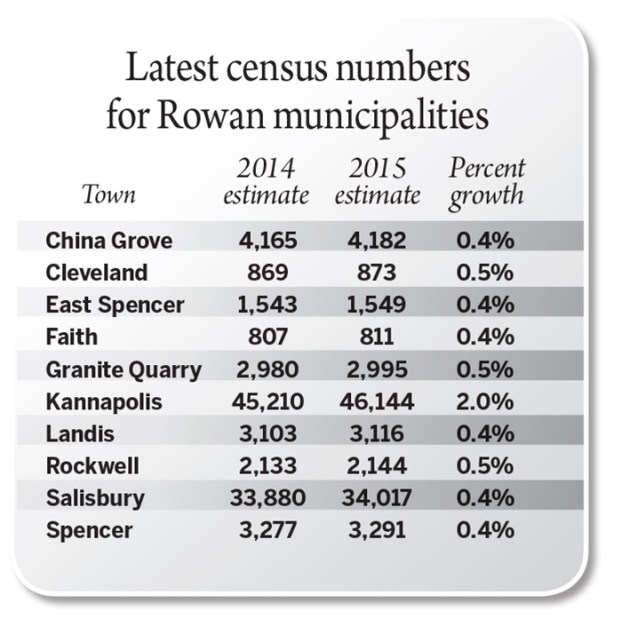 SALISBURY — The population of Charlotte and its immediate neighbors is growing at notable rates, but the same isn’t true for municipalities in Rowan County, according to census estimates released Thursday.

A large portion of North Carolina’s cities lost population last year, including larger ones such as Fayetteville. Meanwhile, cities such as Charlotte and Concord saw population growth rates higher than 2 percent. None of Rowan’s cities show a population loss. However, population growth in Rowan is mostly miniscule. Kannapolis is the only exception.

When asked about the census numbers, Salisbury Mayor Karen Alexander was upbeat about the small growth rate.

“While we would want that kind of growth, we would not be in line for it as quickly as either (Kannapolis or Concord),” Alexander said. “I think that what we are doing, with all of the policy changes and working together and collaborating and anticipating growth is positive and hasn’t happened before.”

She said it’s logical that Concord — an immediate neighbor to Charlotte — and Kannapolis — closer to Charlotte than Salisbury — would see population increases sooner than Salisbury or cities to the north. It’s also unrealistic to think an elected official could see massive population growth numbers in one city council term — two years — or a county commissioners term — four years.

Alexander said Salisbury is planning for growth in a “state of the art” manner. One example she cited is the ability for developers to pay an extra fee to have building plans approved within 24 hours. She also repeated cited collaboration and positive relationships between government officials in Rowan.

The census numbers released Thursday fall in line with what Rowan saw in March, when the U.S. Census Bureau released population numbers for counties. From 2014 to 2015, Rowan County saw an estimated growth rate of 0.3 percent.

FRANKLIN TOWNSHIP —  Dr. Donald Lomax and his wife, Marie, bought this historic property in 1961 and on many Wednesday... read more