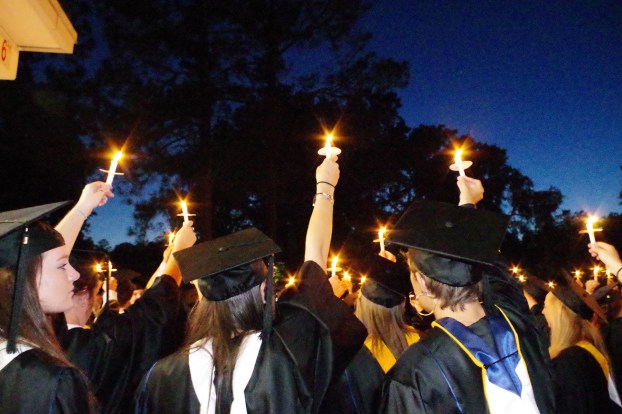 Catawba students raise their candles at the end of the Marshal's Walk after the 2016 Baccalaureate service. Submitted photo

SALISBURY — “Now you have a chance to be a difference maker, to move from commencement to commitment, to be a change maker in the world,” the Rev. Dr. Edward Smith Davis told soon-to-be Catawba graduates gathered at the annual baccalaureate service on May 13.

Davis, who serves as the conference minister for the Southern Conference of the United Church of Christ, was the homilist for the event held in the Omwake-Dearborn Chapel on the eve of Catawba’s commencement ceremonies.

“Yes, there is conflict in the world, but you have made a commitment by reaching commencement,” Davis continued, “and there is more required of us. This (commencement) is just a station on the journey of life.”

He urged the students: “Commit yourself to making a difference. Commit yourself to letting the world smell the fragrance of your flower. The world needs action figures – not the kind you play with, not Captain America, but Captain Courageous — with the courage to be and the courage to do. I urge you to move from commitment to commencement because the world needs people who are theologically grounded.”

Noting the biblical scripture from Lamentations on which his homily was based, Davis acknowledged that “the world can be a scary place and we need to lament sometimes.” Like the city of Jerusalem in the book of Lamentations, everyone at some point in his or her life questions God’s wisdom as to why a particular situation is happening to them and they lament, Davis said.

However, he contended, “We must put flesh on the bones of the gospel! We must take a stand against racism, sexism or any ‘ism’ that is against humanity.

“Our future must be held by love, faith and hope. We may not all be guilty, but we are all responsible. We cannot give up on God, because God has not given up on you.”

Catawba College Chaplain and Senior Vice President the Rev. Dr. Kenneth Clapp ’70, also shared reflections with the graduates in the class of 2016, noting the need they have to believe in themselves, their peers, and God.

“We send you into a world that has many problems, many needs, many challenges, but we send you with the preparation to address those needs and problems,” Clapp said. “Use that preparation to dream of what can be and listen to God, as God will guide you in how to move forward to bring about change and make a difference.”

Following the baccalaureate service, members of the graduating class processed from the chapel by candlelight in the traditional Marshal’s Walk.

By John Owen Special to the Post GRANITE QUARRY — When the 1920s comes to mind, thoughts of partying, singing and... read more