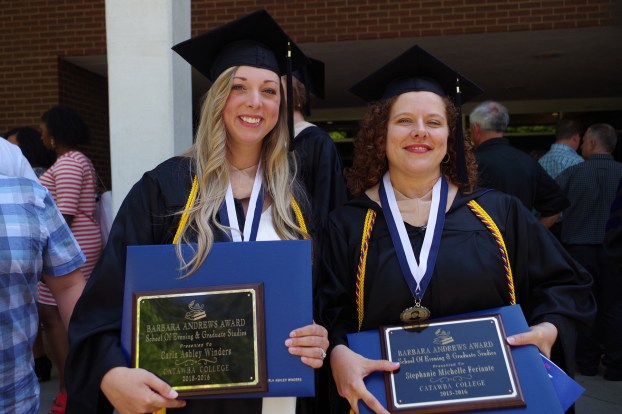 SALISBURY — Carla Ashley Winders of Salisbury and Stephanie Feriante of Granite Quarry, two graduates in the School of Evening and Graduate Studies, were recipients of the Barbara Andrews Award.

The Barbara Andrews Award is presented annually to the graduating senior in the School of Evening and Graduate Studies who most successfully embodies the attributes of character, leadership and scholarship. It was established and named in honor of Barbara Andrews, the first director of this program at Catawba College.

The selection is made by the Catawba College faculty from the six graduating seniors in the program with the highest grade point averages. Students eligible are those who have attended Catawba for at least two years and have earned a cumulative grade point average of at least a 3.5.

A lifelong Salisbury resident, Winders graduated from Salisbury High School almost a decade before entering Catawba as a first-time freshman in the fall of 2012. When she came to Catawba, she worked in a local retail store, and then advanced her career to another field that she has become quite passionate about.

An entrepreneur, she started a retail and online clothing store for women’s fashion. During her time as an undergraduate, she married a local Salisbury resident and the two are expecting a second child, a little girl, to be a playmate to her son. Throughout her studies, she was a dean’s list student, inducted into the Alpha Sigma Lambda honor society in the spring of 2015. She was president of this honor society for adult undergraduates during the 2015-2016 academic year. She maintained an outstanding academic record ending her studies with a 3.94 GPA.

Ferantie began her studies in our School of Evening and Graduate Studies in the fall of 2013. Almost 20 years after she began pursuing an undergraduate degree, she transferred credits to Catawba from Brigham Young University in Utah.

Here, she pursued a bachelor of business administration with a concentration in business management. A graduate of Charlotte Country Day School, she now works in the all-important and rapidly growing medical field as a practice and clinic manager. She recently reported to Catawba administrators that her degree did in fact help her advance her career. A dean’s list student during her years at the college, she was part of a special group of students who maintained a perfect 4.0 GPA during their undergraduate studies.