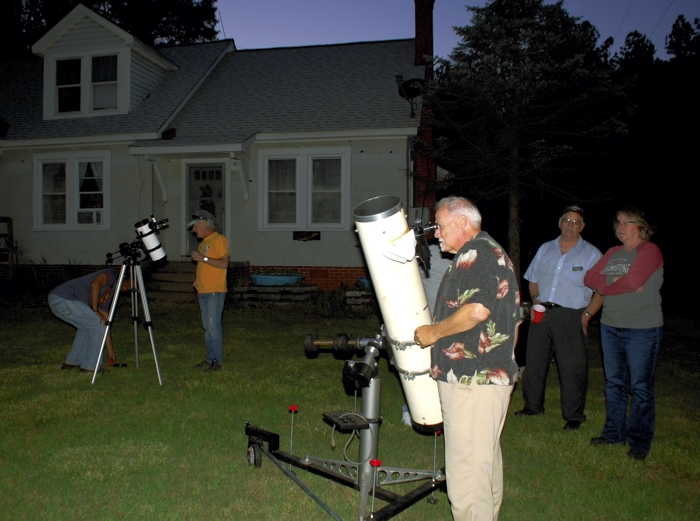 ATWELL TOWNSHIP — You have to like a group whose members bring lawn chairs and casually conduct their monthly meeting outside in the front yard.

Maybe that’s how the Astronomical Society of Rowan County has lasted 35 years. They share food, socialize, pet Lilly the dog and go over things they have planned such as star parties and educational programs.

As darkness sets in, they walk over to some of the telescopes to see what the heavens offer. In the dusk on this particular evening, they easily train their telescopes on a well-defined half moon.

Jupiter and four of its moons also are showing up nicely.

It all happens in the big front lawn of Ralph and Alice Deal, brother and sister astronomers who live at 1920 Deal Road. Ralph is the lone charter member from 1981 who is still active in the society.

Alice joined the group in 1989, and she serves as president. In all, the Astronomical Society has more than 30 members on its roll, but only about half of that number typically show up for meetings, which this year are held at 7:30 p.m. on the second Saturday of each month.

The group made Ralph the person in charge of public relations — and he still is, 35 years later.

For many years, the Astronomical Society met at Trexler’s home on Old Mocksville Road, and she was the driving force.

“We sure were glad she started this club,” says Deal, who through the years has mentored five high school kids  — four from Mooresville, one from South Rowan — who wanted to know more about astronomy.

Since 2005, the Astronomical Society has met at the Deals’ house.

Members of the Night Sky Network, the Rowan society has given programs for Scouts, elementary schools and churches. Its star parties sometime attract several hundred people, many of whom are looking through telescopes for the first time.

Twice a year, the society has programs at the Carolina Mall in Concord, and members also have provided observation opportunities after Kannapolis Intimidators games.

The group’s prized possessions include a 15-inch telescope, which takes several people to roll out on its buggy. Ralph Deal says it took four years to build from 1994-98. Just getting the mirror from Arizona took two years.

Ralph Deal gives a lot of credit to Don Patterson and Joe Teeter for the metal work and woodworking they did, respectively, in building the telescope.

Another thing the Astronomical Society is proud of is its replica Galileo telescope, which the society won in a national contest in 2009. It was one of only five clubs in the country to win the telescope based on its having a large number of programs — 16 — the previous year.

When the society has star parties, the people who attend are excited to see anything — moon, planets, constellations. Some folks are taken aback at how clear things can be. Once, Vice President Larry Karriker says, one of the club’s telescope’s was trained on Saturn, and the person looking through the lens refused to believe it.

“No, that’s a picture in there,” the visitor said.

“We’ve been accused of that sometimes,” Karriker adds.

Once, while doing a program in Troutman, the International Space Station passed overhead.

“Boy, the crowd just went crazy,” Karriker says. “I guess they thought we arranged that.”

The love of looking at the sky goes back for most astronomers to the days when they were kids, camping out and looking at the sky. For Ralph Deal, it happened Oct. 4, 1957, when his parents took their five children outside at night to follow the path in the sky of the Russian spaceship Sputnik, the first manmade object to orbit the earth.

Ralph was 9 then, and when everyone else in his family went back inside, he lingered behind, keeping his eyes upward. He was hooked for life.

Hang around astronomers for awhile, and you realize they see the big picture.

Astronomy, they tell you, is the one science everybody can enjoy just by walking out the front door and looking up. And you can do it anywhere in the world.

Ancient and not-so-ancient cultures around the world always made it a practice to study the skies. Think of all the astronomical references in the Old and New Testaments of the Bible, or those made by William Shakespeare.

Astronomers also will tell you the heavens above are like one giant clock, and by studying the skies you can be an accurate fortune teller.

“We know 50 to 100 years from now when something is going to happen, like a solar eclipse,” Dave Godman says as an example. “The clockwork of our universe is well known.”

You look at the sky a lot differently when you realize it’s a timepiece, a really accurate timepiece.

One thing you come away with after visiting the Astronomical Society is that no one should be intimidated by the science. Nothing is more accessible than the sky, and it’s amazing what you can see first with the naked eye, then with a simple pair of binoculars, then with a telescope.

The Astronomical Society of Rowan County welcomes newcomers to any of its meetings. Annual membership dues are $15 per individual or $25 for a family. But there’s no cost just to visit.

You’ll definitely be able to pet Lilly, and if it’s a clear night, you might see something spectacular.

For more information on the Astronomical Society of Rowan County, contact Ralph Deal at 704-855-1591, or ralph1@windstream.net.