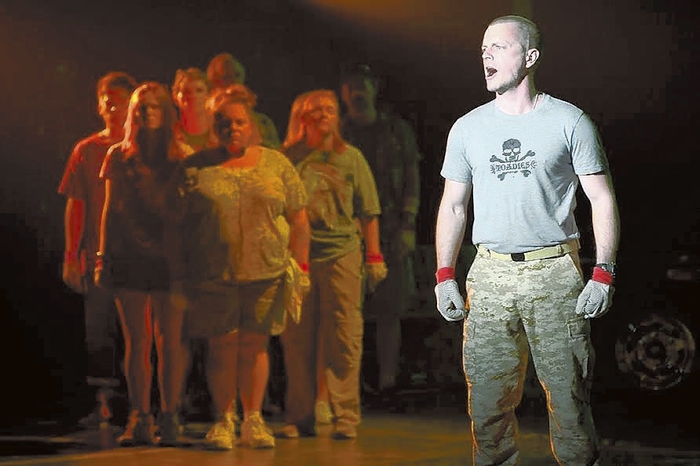 SALISBURY — Since its opening in 2011, “The Book of Mormon” remains a hot Broadway ticket.

David Larsen, who starred in its national tour, will perform Friday and Saturday for Night on the Stage, Piedmont Players Theatre’s annual fundraiser.

“This is my first solo show,” says Larsen via phone from his home in New York City. “I’ll be performing songs from shows I’ve been in, and Night on the Stage is the perfect format to do that.”

Not only will attendees hear selections from “The Book of Mormon,” they’ll also be treated to songs from “Hands on a Hard Body,” a show that PPT will stage in July.

“It’s an endurance contest,” Larsen explains, in which the last contestant with his or her hand on a vehicle wins the automobile. “There’s no ensemble. These are all principal characters. You get to dive into their souls a little bit.”

Like many actors, Larsen first became interested in theater in high school. He played the lead role in “Joseph and the Amazing Technicolor Dreamcoat” his senior year.

“Joseph was a special show,” says Larsen, now 36. “It was so successful that we brought it back a couple of months later. We raised $30,000 to create an arts program for the three high schools in our district.”

The fundraiser continued for about five years, Larsen says. “That show will always hold a special place in my heart.”

Larsen graduated from Carnegie Mellon University with a BFA degree before moving to New York City to pursue his acting career. He’s lived on the same block in East Harlem for the past 11 years.

“I was a good student growing up,” he admits. “I took it seriously.”

It’s paid off during his acting career, he says. “Anybody who’s had to learn lines knows what a big undertaking it is and the discipline it takes. It can be a doozy.”

He played Elder Kevin Price for two years in “The Book of Mormon” tour.

“I served my two-year mission,” he says, laughing, noting that Mormon missionaries serve the same amount of time.

“It is really, really wonderful to play a show that is well received,” he says.

The show was written by the same writers who created “South Park,” he says. “So after five years, people know what they are getting themselves into. It has some bad language, but the songs are just so dang catchy.”

The show, he says, is like “fart jokes with a message.”

“We’ll only get one or two rehearsals before we do the show,” Larsen says, noting that’s not unusual for this type of event.

At present, Larsen is in “full-time audition mode.”

“We call it pounding the pavement,” he says. “It’s an ongoing task, but it keeps you on your toes.”

It also allows for opportunities to do events like Night on the Stage.

“I hope that people enjoy themselves this weekend, first and foremost,” Larsen says. “It should be a great introduction to some really good music.”

This is Andy Abramson’s third year in helping coordinate Night on the Stage. He is president of the PPT board of governors.

“It’s a unique experience where guests get to be up close with a Broadway star,” he says. “When you see greatness in front of you, it’s evident, and I enjoy being able to bring that caliber of performer to Salisbury.”

Another highlight of the evening will be a raffle for a trip for two to New York City, a two-night stay including round-trip airfare, hotel accommodations, and tickets to a Broadway show of the winner’s choice.

Although Abramson probably can’t get his hands on tickets for “The Book of Mormon.”

A few tickets at $150 per person for PPT members and $175 for non-members remain for both Friday and Saturday nights. The event starts at 6:30 p.m. with an opening reception and silent auction, followed by dinner by Chef Santos, and Larsen’s appearance.