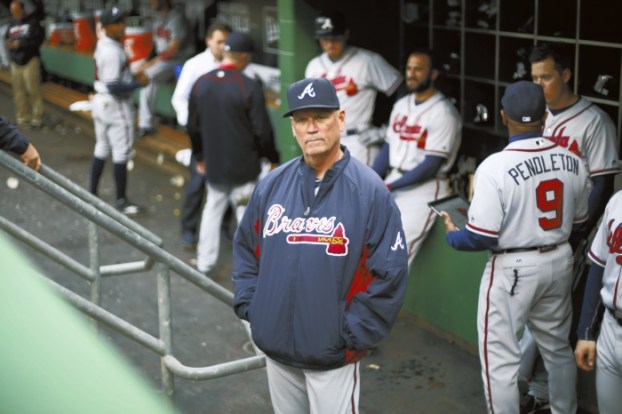 Atlanta Braves interim manager Brian Snitker stands in the dugout before a baseball game against the Pittsburgh Pirates in Pittsburgh, Tuesday, May 17, 2016. (AP Photo/Gene J. Puskar)

ATLANTA (AP) — No matter the modest expectations from outside the team, Atlanta Braves management didn’t expect a rebuilding year to produce the worst record in the majors.

So with the team bottoming out, the Braves Tuesday fired manager Fredi Gonzalez.

Atlanta is in the midst of a dismal start that failed to meet even the lowered expectations of a rebuilding year, so Gonzalez felt the brunt of the disappointment and was sent packing in his sixth season.

The Braves, who lost again at Pittsburgh on Tuesday night, have lost three straight and nine of 11. They have baseball’s worst record at 9-29 and already are 13 ½ games out of first place in the NL East.

Brian Snitker, who has been manager of the Braves’ Triple-A Gwinnett team, will move up as interim manager. Snitker was Atlanta’s third-base coach from 2006 to 2013, also following Gonzalez in that role when Gonzalez was named manager of the Marlins.

Braves general manager John Coppolella had no comment when confirming the firing to The Associated Press. There also was no comment from Coppolella or president of baseball operations John Hart in the team’s official announcement of the move.

Gonzalez, 52, replaced Hall of Fame manager Bobby Cox, who retired following the 2010 season. Gonzalez was the only Latino manager in the majors and he is the first Braves manager to be fired since Russ Nixon in 1990.

Since then, the Braves have shifted to rebuilding mode, seeking young pitchers in a series of moves that stripped the roster of such top players as Justin Upton, Jason Heyward, Andrelton Simmons, Craig Kimbrel, Evan Gattis and Shelby Miller.

Expectations were low this season as the Braves set their focus on moving into their new SunTrust Park in 2017. Even so, it was clear Coppolella and team president John Hart didn’t expect the struggles to reach the lows that began with nine straight losses to open the season.

The Braves had a brief recovery with four straight wins but haven’t been able to put together another winning streak. They lost two of three at Kansas City to open a 10-game road trip and also lost Monday night’s series opener at Pittsburgh, 8-5.

Gonzalez was hurt by especially poor play at home. The Braves are 2-17 at Turner Field, and the dismal record showed in the stands. Attendance was below 18,000 for each of the team’s last four home games.

The Braves were competitive through the first half of the 2015 season, posting a 42-42 mark. Injuries and trades helped fuel a free-fall for a 67-95 finish, and the poor results continued this season.

The poor start led to increased questions about Gonzalez’s status, and he recently addressed the uncertainty.

“Nothing is for sure in our business, so you hold your head up, make good decisions and go forward and see what happens,” he said.

John Jaso, Andrew McCutchen and Francisco Cervelli had three hits each for the Pirates, who led by nine runs early then held on after an extended rally by the Braves. Juan Nicasio (4-3) survived five innings to pick up the win thanks in large part to Pittsburgh’s season-high 21 hits. Mark Melancon worked the ninth for his 13th save.

Mallex Smith hit two homers for the Braves.  Rookie Aaron Blair (0-3) failed to make it out of the second inning as the Braves fell to a major-league worst 9-29.

Thrust into a 125-game tryout for the permanent gig, Snitker told the Braves — several of whom he coached on their way to the majors — that he would need time to get a feel for things.

The start of his tenure looked awfully familiar to Gonzalez’s final weeks.

Blair is among the core the Braves hope to build around as they retool heading into 2017. The 23-year-old, a former first-round draft pick by Arizona acquired by Atlanta last year, was solid if not spectacular in his first four major league starts but struggled in his fifth.

The Pirates jumped on Blair for seven runs in the first inning, though two fielding errors did little to help him. Nicasio chipped in a two-run single during the barrage, an outburst that might have continued unabated if Jaso wasn’t thrown out at home to end the inning.

Gonzalez also recently said he worried he wouldn’t survive the slow start to see a turnaround when more young players are ready for the majors.

“My biggest concern is you go through these lumps, you see these young guys come in and then you get let go, you get dismissed, and the guys are here the next year and they’re winning everything,” Gonzalez said.

“But again, this is a cruel business and it’s part of our job.”

Prep Softball: Davie rallies in the seventh to beat Wonders