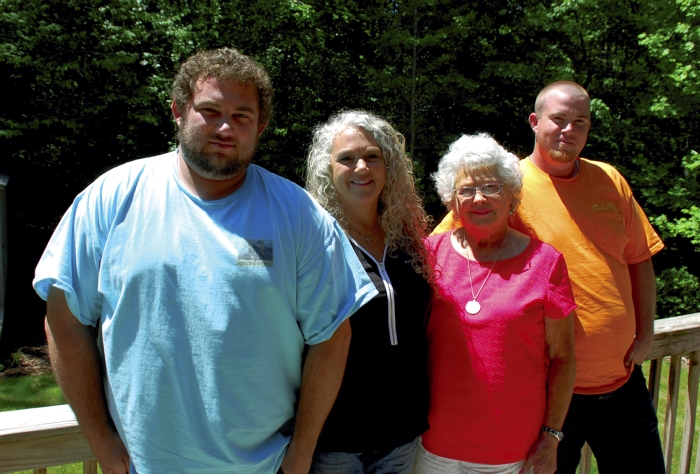 Mark Wineka/Salisbury Post From left, Dusty Vernon, Natalie Rabon, Joy Hamilton and Justin Vernon. About a year ago, the family members were floating together in the Gulf of Mexico after Natalie's 48-foot yacht sank more than 10 miles from shore.

SALISBURY — Enough time has passed that they can talk about it now. It’s just difficult to shake the memory of clinging to each other in the dark of night, bobbing in the waters of the Gulf of Mexico more than 10 miles from shore.

The five people in the water could hardly see the person closest to them because of the blackness. They constantly checked on each other by shouting out names and asking, “Are you OK?”

Natalie Rabon and her mother, Joy Hamilton, who was then 79, also were thinking of the hammerhead shark spotted close to the boat earlier in the day. They kept those fears to themselves.

Virtually all of Natalie’s worldly possessions had been on the 48-foot yacht that had just sunk beneath them. But of more concern to Natalie — her mother and two sons, Dusty and Justin Vernon, and her fiance, Richard, were there in the water with her trying to stay together.

They knew the Coast Guard was on the way, but would the rescuers be able to find them?

Natalie Rabon flew up from Florida this past weekend to attend 30-year-old Dusty’s graduation in electronics from Rowan-Cabarrus Community College. Justin, 29, also was in Salisbury for his brother’s graduation, and they all met at Hamilton’s home in Countryside Manor.

It was on Mother’s Day weekend a year ago that Dusty and his grandmother, along with Justin, a S.C. resident for the past 12 years, had traveled to Florida to have their first glimpse of Natalie’s boat.

Rabon had purchased the 1998 Bluewater yacht only three weeks earlier in Bradenton, Fla. It was the boat of her dreams, the kind she always envisioned living in, sunning on its decks and guiding on the open sea.

Before buying the yacht, Natalie paid for a complete boat survey (like a house inspection). She and Richard also hired a captain to give Richard a refresher course on operating this kind of vessel.

Taking the boat back to Crystal River, the couple stopped for a night at Anclote Island, where they slept on the top deck under the stars.

“It was everything I had imagined,” Natalie said. “I was in Seventh Heaven.”

After docking at Pete’s Pier in Crystal River, the couple spent the next two weeks moving all their belongings onto the yacht. This was going to be their new home.

“We spent the evenings sitting on the deck congratulating each other in accomplishing our dream,” 57-year-old Natalie said. She intended to name the boat “For Pop,” in honor of her late father, Don Hamilton of Salisbury.

The Hamilton family had come to Salisbury when Natalie was in the fifth grade. For 20 years, they lived on High Rock Lake, where Natalie’s love for the water and (smaller) boats was established.

As an adult, Natalie moved from Salisbury and returned several times. Her most recent job here was as a pharmacy technician at the Hefner VA Medical Center in Salisbury, but when she had the opportunity to transfer to a VA in Florida in 2014, she jumped at the chance.

Richard, also a VA employee, secured his transfer in February 2015. On Valentine’s Day 2015, Natalie had a double-knee replacement and within two weeks had sold her former home in Rowan County. Then came their purchase of the yacht.

The couple looked forward to taking the yacht into the Gulf  once Joy Hamilton, Dusty and Justin arrived to celebrate Mother’s Day and Justin’s birthday.

The “For Pop” crew — Richard, Natalie, Dusty, Justin and Joy — stocked up on some groceries that Saturday morning and took off, chugging up the Crystal River and into the Gulf.

Natalie filled the yacht with $600 worth of gas. Natalie judges they were about 13 miles offshore when they reached the reef they were aiming for between 1 and 2 p.m. Two small boats were fishing in that same area, but they left not long after the yacht anchored.

Dusty and Natalie saw a large hammerhead swim by their boat. No matter, Richard and Justin donned scuba gear and explored the bottom. They were in about 14 feet of water near the reef.

The boat was gently rocking from 2- to 3-foot sea swells, Natalie said. But overall, it was a beautiful day. “I swear, we were having the best time,” Joy said.

For dinner, the family grilled up hamburgers  and hot dogs and enjoyed a nice sunset. The sun and air combined to leave everyone feeling tired.

Dusty and Joy headed for their sleeping quarters about 9 p.m. It was a half-hour later that Natalie noticed water splashing over the swim platform, and to her, the boat seemed to be getting heavy. She told Richard her concerns and walked to the back bedroom where her shoes already were floating on the floor.

Richard popped the back hatch, and it was full of water. When Natalie opened a sliding glass door on the deck in hopes of retrieving their four sets of expensive scuba gear, a wave crashed over her.

Richard knew then to send out a mayday call to the Coast Guard with their coordinates. The boat was sinking — sinking fast.

Joy Hamilton already was in her pajamas. Dusty was asleep. “She hollered at us, ‘We have a serious problem,'” Joy recalled.

Natalie thought she was going to have to break down Dusty’s door to rouse him. But soon, everyone was awake and had their life jackets on. Natalie noticed the back bedroom was already flooded.

Richard told Natalie and Dusty to close the cabin windows in hopes some of their belongings would stay in that enclosure and could be salvaged later.

The water already was waist deep in the cabin as the last window was closed. While sinking, the boat started to roll starboard. Joy tied her purse to her life jacket. Natalie grabbed a waterproof bag and threw in all of the family’s cellphones and an emergency kit with flares.

She also secured her pocketbook. As the boat kept sinking, the lights went out, plunging them into the darkness. The only lights on the horizon came from a power plant miles away.

The radio was lost, but Richard fished into the dry bag for his cellphone. He first called the Coast Guard without getting an answer. He then reached a county sheriff’s department, which was able to transfer him to the Coast Guard.

The Coast Guard’s official report would later say it received the first radio mayday call at 9:27 p.m. and launched a boat and an MH-60 Jayhawk helicopter from the Yankeetown Station.

Richard’s cellphone call was logged in at 10:05 p.m., and the report said “the vessel was sinking and all people aboard were going into the water.” The Coast Guard told Richard everyone should stay with the vessel and ignite a handheld red flare the moment they saw rescue personnel.

After the boat rolled, there was a side railing about 2 feet under water that the family members could reach and hold, though they often lost contact when a wave washed over them.

Natalie’s yacht had sunk in 30 minutes. And though it seemed longer to them, Natalie, Richard, Dusty, Justin and Joy were in the water about an hour.

“I don’t know how,” Natalie said, “but everyone remained calm through the ordeal. Dusty was holding the strap on my mother’s life jacket because she was floating on the waves.

“Justin was holding my jacket and looking after me. We all stayed together and never let each other float away.”

Joy Hamilton said the thing that still impresses her today is that there was no crying, screaming or panicking. “Everybody did what they had to do,” she added. “Everyone went into survival mode.”

They also felt secure in knowing the Coast Guard had been contacted and was en route. Sea Tow also had been reached, and its crew was on the way.

Justin lit the flare that helped direct the rescue teams to the folks in the water.

“These people did everything right in the midst of danger,” Petty Officer Second Class Jonathan Wheatley said later in his report. “They had all the proper safety equipment including a marine radio, life jackets and flares, and they used them properly.”

In this order, the Coast Guard pulled Joy, Natalie, Richard, Justin and Dusty from the water.

“They needed to reposition the rescue boat to pick up Dusty,” Natalie said, but Dusty wasn’t going to wait. “He made a flying leap and jumped into the boat. He did not want to be left alone.”

Dusty skinned his legs during the jump — the only real injury the five had.

It was a long, cold trip back to shore, where lots of paperwork needed to be filled out and arrangements made to salvage the boat, which was necessary because of all the oil and gasoline on board.

Sea Tow began that operation the next day. Meanwhile, the five rescued from the waters had next to nothing. None was wearing shoes. All were soaked. Joy kept on her life jacket because he was wearing only pajamas otherwise.

At about 2 in the morning while Richard was still handling some of the details, Joy, Natalie, Dusty and Justin walked into a 24-hour Walmart and thanks to still having her purse, Natalie was able to buy everyone a set of clothes, shoes, and toiletries.

Natalie and Joy couldn’t believe no one in Walmart said a single word about how they looked or how they were dressed.

Joy had lost her new hearing aids and a sleep machine, and everyone’s cameras, glasses, laptops, jewelry, clothing, scuba gear and phones were gone or damaged. Things in the dry bag had gotten wet when Richard retrieved his cellphone.

The family found some motel rooms for the night, but no one slept. It was sinking in quickly that Natalie and Richard were homeless. “All of us felt Natalie’s loss,” Joy said. “It was like her house had burned down.”

Sea Tow brought Natalie’s boat back to dry dock by 9:30 the next evening. On the following morning, the family went over the boat looking to see what could be salvaged. The men’s wallets and Joy’s car keys were found. Everything else, including the boat, was a loss.

Natalie had insured the yacht for a couple of thousand dollars over what she had paid for it. Her policy only allowed $1,000 as a replacement for personal property. “We had everything in there,” Natalie said.

What caused the yacht to sink? An inspector determined that a wet exhaust hose had separated, and the opening exposed was under the lip of the water line. With each wave rolling into the boat that day, water would enter,” and the bilge (pump) just could not keep up with the volume of water,” Natalie said.

The epilogue to this story: Dusty is working full-time for a firm in Kannapolis. Justin has decided to leave South Carolina and move to Florida to be with his mom. Natalie and Richard have bought and remodeled a 57-foot house boat — their new home.

Natalie already has “For Pop” painted on its side.

“I was so proud of my family throughout this,” Joy Hamilton said, “and proud of Natalie for pursuing her dream. … Natalie has a knack for bouncing back.”