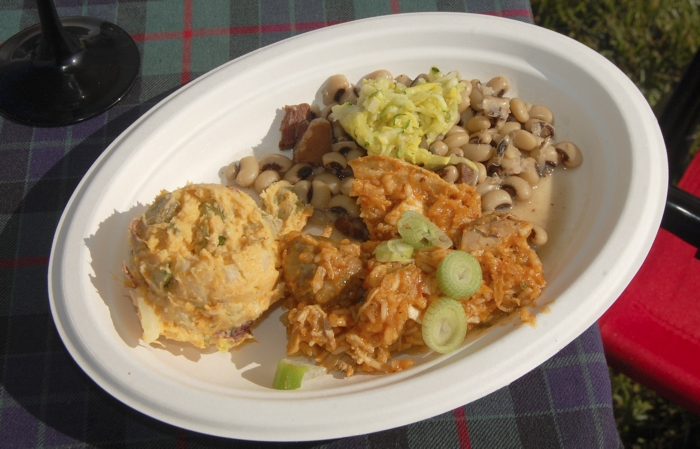 No one left Riot in the Vineyard hungry Sunday evening. With a menu as wide ranging as tofu jambalaya and whole barbecued pigs, there was plenty to choose from.

Jason Nain, chef at Morgan Ridge Vineyards and Brewhouse, created some of his favorite Cajun dishes for the annual Bread Riot fundraiser. It’s a showcase for local food, meat, vegetables, fruit and fresh baked rolls. It was a perfect, sunny day for about 350 people to sit on the grass and listen to music while munching pig or salad.

The pig cookers had been at it since at least 2 a.m., babysitting their cookers and adjusting heat and sloshing sauce. By 2 p.m., the pigs were nicely browned, with crispy bits and succulent meat. They still had a while to go, though.

Seth Morris was using oak, hickory and cherry to cook a pig from Wild Turkey Farms and a half pig from Thomas Family Farm.

Aaron Goss used propane on his pig from Two Pigs Farm. He basted it every 40 minutes with a secret sauce — all he would say is it had vinegar in it.

In the kitchen, everyone was chopping or stirring something. There were strawberries to slice, tomatoes to dice, chicken to be shredded.

Little quiches filled with spinach and wild mushrooms were lined up, waiting to go in the oven.

A big bin of mozarella cheese and basil marinated in one corner,

Huge pots of simmering jambalaya were bubbling on the stove — one was strictly vegan.

Black-eyed peas had been cooked in a stock using smoked pork from Wild Turkey Farms. A bowl of squash and zucchini chow chow was marinating, a recipe made byf William Caldwell.

The wonderful smells in the kitchen included a simmering pot of honey butter, while jalapeno hush puppies sizzled in the fryer. The secret to the honey butter is a little chardonnay. The thick syrup made the hushpuppies irresistible.

When the time was right, Wild Turkey Farms Cajun sausage and roasted chicken from area farms went into the bubbling vats of jambalaya just to heat through. The key, Chef Jason said, was to take the pots off the heat and let them steam for about an hour.

In the midst of mad kitchen activity, mixing and cooking and chopping, the sound of walkie-talkies crackled while helpers asked about set up.

Strolling through the property was Andy Maben, brewmaster at New Sarum Brewing, which brought beer to the festivities. He was sipping a cold one and looking forward to the food.

“I love this place, … Both pigs look immaculate. I can’t wait to use Aaron Goss’ malt.” He was looking forward to trying Seth’s pig, too, calling him “a masterful cook.”

Later in the day he and Morgan Ridge owner Tommy Baudoin were sitting together talking about Tommy’s plans for a brewhouse on Rail Walk, not far from New Sarum. “New Sarum is 100 percent with them,” Andy said.

The first Riot in the Pasture was at Buddy Hoffner’s farm, which now produces grain for New Sarum.

Food was set up at different stations, one for the jambalaya, black-eyed peas, chow chow and sweet potato salad. Another was for vegetarians — and others — with sautéed broccoli, mushrooms and other greens, the spinach and wild mushroom quiches, the caprése salad of mozzarella, tomatoes and basil and the greenest green salad ever, topped with a rich local cow’s milk cheese and a chambourcin dressing.

The lines for pig were long, but everyone got plenty of barbecue. The different styles were notable mainly for the sauces. Both methods of cooking produced moist, rich meat.

As the evening wound down, big tubs of vanilla ice cream appear at a station on the hill, serving ice cream with fresh, local strawberries and granola from The Bread Basket.

Drink choices were plentiful, including both New Sarum beer and beer made at Morgan Ridge, along with wine and plenty of water and lemonade. Fruit-filled sangria was also popular.

Chef Jason tried to adapt some of the recipes for a home cook, reducing the large volume of ingredients he was using. The recipes are easy to prepare and full of flavor.

The key to the sweet potato salad is using white potatoes for their starch, he said, mashing the potatoes while warm and letting the salad sit in the refrigerator overnight.

Chop the onion and celery and drain the pickled okra. Mix together the mayonnaise, salt, pepper, onion, garlic, maple syrup, hot sauce, Worcestershire and molasses. Boil potatoes until tender and mash with an old-fashioned potato masher, then mix all ingredients while the potatoes are still warm. Chill in the refrigerator overnight to let flavors blend.

The result is creamy and slightly sweet, with a nice, vingary crunch from the okra.

Grate the squash and zucchini on a hand grater. Grate or chop the onion in the food processor. Stir all the ingredients together. Red pepper flakes add a little heat, but you don’t have to add them.

This chow chow provided a little sweetness to the black-eyed peas and would be good served with fish, chicken or on top of a hot dog or burger.

Soak the peas overnight in plenty of water. Place the pork pieces in 1 gallon of water and simmer 2 1/2 or 3 hours. Remove the bones and meat from the water.

Add the onion and some cold water to the stock with about half a cup of the meat. Add beans and simmer with the pepper, onion, garlic and Worcestershire sauce. Cover and simmer for about one hour, until beans are tender.

Do not add salt. The smoked pork is salty enough to season the beans. Serve with the chow chow.

Equal parts honey and butter, about a pound of each

Mix all ingredients in a large pot. Let reduce, whisking occasionally, until the sauce is a dark caramel color and has reduced.

Could also be used on chicken wings.