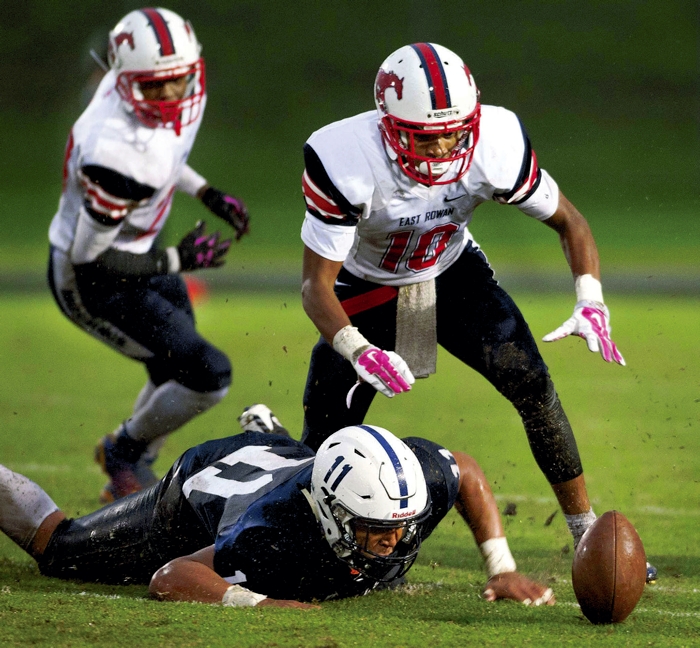 GRANITE QUARRY — East Rowan defensive coordinator John Fitz called Bravon Goodlett into his office and told him there was bad news and good news.
The bad news was that Goodlett was 5-foot-11 and his opportunities to play college basketball were going to be limited. The good news was that Goodlett was a solid enough athlete that football might be his ticket to an education. You get a lot more bruises in football, but there also are a lot more scholarships available.
“Coach Fitz told me that at my height I had a better chance to play college football than basketball,” Goodlett said. “He turned out to be right.”
Goodlett is a savvy guard who turned in 18-point games against powerhouses North Rowan and Concord on the hardwood, but he has signed with St. Andrews to play football. He’ll probably be a free safety, the position he handled well for East Rowan as a senior.
It took some doing to get Goodlett out for football as a senior. He’d been away from the game for more than three years for a reason, but Fitz and head coach Kenneth McClamrock wore down his resistance and won him over.
“I tore an ACL playing football in the eighth grade, and I just focused on basketball after that,” Goodlett said. “I didn’t think I’d ever play football again.”
What Goodlett brought to the table was obvious right away. When East scrimmaged Fayetteville Jack Britt, Goodlett showed instincts and speed, taking the correct angle and making a touchdown-saving tackle on a back who had broken loose.
He went on to have quite a year.
“We always need to get all the athletes in this school out for football,” McClamrock said. “Bravon did an unbelievable job for us for a first-year guy.”
In East’s opener against North Rowan, Goodlett made six solo tackles. He had two tackles for loss in South Piedmont Conference games with Northwest Cabarrus and Central Cabarrus. He made a fumble recovery against Cox Mill and he pounced on another loose ball in a hurricane at Hickory Ridge.
He finished the season as East’s leading tackler — 50 solos and 28 assists. He made second team all-county in his varsity football debut. That was a remarkable feat.
“I’m really glad I tried football,” Goodlett said. “I had some success.”
College coaches noticed.
“I had a few offers from Division II and Division III schools and I made a visit to one of the D-IIIs (Bridgewater, Va.),” Goodlett said. “But St. Andrews is not far away and I had a great visit. It’s exciting to be part of their first recruiting class. When they offered me a chance, I had to take it.”
St. Andrews is in Laurinburg, not far from UNC Pembroke and about two hours from Salisbury.
St. Andrews has turned out well-respected alumni such as South Rowan teacher/girls basketball coach John Davis. Former South girls standout Cassidy Chipman played hoops for St. Andrews last winter.
St. Andrews hasn’t competed in football since the 1950s when it was known as Presbyterian Junior College, but reviving football is seen as a good way to boost enrollment and community interest. A stadium is being built and recruits are being signed.
The Knights’ first game won’t be until 2017, so Goodlett and his fellow recruits will have a redshirt year of preparation. Goodlett, who weighs about 170 pounds, can use that year to add muscle and weight. He’s a good student, but that redshirt year also will give him extra time to adjust to college work in the classroom.
St. Andrews is a member of NAIA, the National Association of Intercollegiate Athletics.
The plan is for the Knights to compete in the Mid-South Conference, which will be a three-division, 20-team league in 2017.
The staff has been hired at St. Andrews, including head coach Dave Harper, who came from Ferrum, and defensive coordinator Bill Young, who recently was the head coach at Greensboro.
It was Harper who put in a call to Goodlett and sold him on visiting St. Andrews.
“Bravon is excited about the chance to help start something good,” McClamrock said.