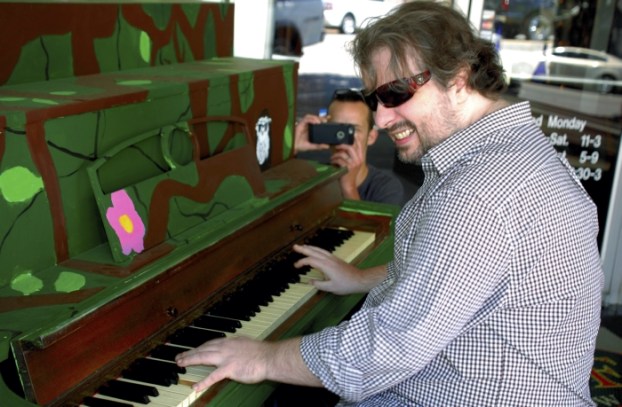 SALISBURY — As Randy Gilkey settled in behind the piano outside of Sweet Meadow Cafe Monday, it wasn’t long before he was smiling, bouncing and singing a honky-tonk version of The Band’s “The Shape I’m In.”

The 39-year-old Gilkey, blind his whole life, has been performing since he was a kid, and he’s good. It’s hard to categorize him because the catalog of songs he retrieves from his brain, like a built-in iTunes store, is pretty broad.

He says he likes old country, blues, folk and Beatles, and he’s on constant shuffle.

“I’d say American,” Gilkey said. “I do a little bit of everything. I’m old school. I’ve got an old school soul.”

When people figure out Gilkey is blind, they automatically start with their own comparisons or expectations of Stevie Wonder, Ray Charles or, because he’s white, Ronnie Milsap.

He can play some Milsap songs, “but I like Bob Dylan a whole lot better,” Gilkey said.

As he tried out several of the 10 downtown Salisbury pianos Monday — a second-year public art project sponsored by the Salisbury Symphony — Gilkey drew some attention.

Store owners popped outside to listen. Pedestrians walking by did double-takes, while others stopped and took in a couple of songs. Motorists waiting at stoplights rolled down their windows for the impromptu performance.

Gilkey grew up in southern West Virginia and still lives there today in Oak Hill. He depends on nephew Josh Helm as his full-time assistant, and Helm represents their Salisbury connection.

Helm, also a West Virginian by birth, moved to Salisbury with his family in the second grade and lived here until about four years ago. His son attends elementary school here, and his sister lives in Cleveland.

“He’s the best help I’ve ever had,” Gilkey said of his nephew.

Gilkey and Helm were in the area Sunday, because Gilkey was playing a benefit concert at Queen’s Landing in Iredell County. A week earlier, they also were in Salisbury, and Gilkey was so impressed with the downtown’s pianos he played something on each one.

Gilkey, who has a twin sister, lost his sight as an infant when too much oxygen was pumped into his incubator. At about 3 years old, he started hitting the keys on an upright piano his parents were given.

He also started toying with a chord organ. By the time he was 6, his parents had a Wurlitzer spinet piano, and a couple of teachers guided him through the normal beginners’ songbooks.

Meanwhile, Gilkey was wanting to play more like Jerry Lee Lewis. “It was boring to me,” he said of the traditional approach.

By the time he was 11, Gilkey had teamed with a schoolmate, who was a drummer, and they were playing at fairs and other local events. By age 12, Gilkey joined his first band, and since 1989, he has been playing and singing professionally, many times in clubs and bars.

His sister owns a bar in Oak Hill, where he sometimes performs.

Gilkey counts among his career highlights playing once in 1997 with Chuck Berry and playing on a Christmas DVD in 2006 with Maurice Williams, known for his hit song “Stay.”

Over the years, Gilkey has learned to play the guitar — acoustic and electric — the bass, drums and harmonica. He sings well and said he still plays in bands and does solo performances whenever he can.

“The gigs aren’t as plentiful as 20 years ago,” Gilkey said.

When he performs by himself, Gilkey adds a drum machine and a harmonizer. After watching his shows, there are people who sometimes doubt he is blind.

“I’ve had some people claim I’m faking it,” Gilkey said. “… We meet all kinds of people.”

Outside of Sweet Meadow Cafe, across from a curious Monday lunch crowd at Hap’s Grill, Gilkey also played and sang John Lennon’s “Watching the Wheels” before Helm led him up toward the Square and an equally good sounding piano outside of Maia’s Fashions.

Owner Maia Smith was soon at the front door, giving a thumbs up. Walking by, Clarence Marlin stopped for a couple of songs, and Mary James also was in the sidewalk audience.

More songs followed: Eric Clapton’s “Before You Accuse Me,” George Harrison’s “Here Comes the Sun” and Neil Young’s “Long May You Run” among them.

And that’s a good theme song for Gilkey: Long may he run.

Fans or those interested in hiring him to perform can contact Gilkey through his Facebook Page, Randy Gilkey Music. The page has several videos of him playing the downtown pianos in Salisbury.

FRANKLIN TOWNSHIP —  Dr. Donald Lomax and his wife, Marie, bought this historic property in 1961 and on many Wednesday... read more