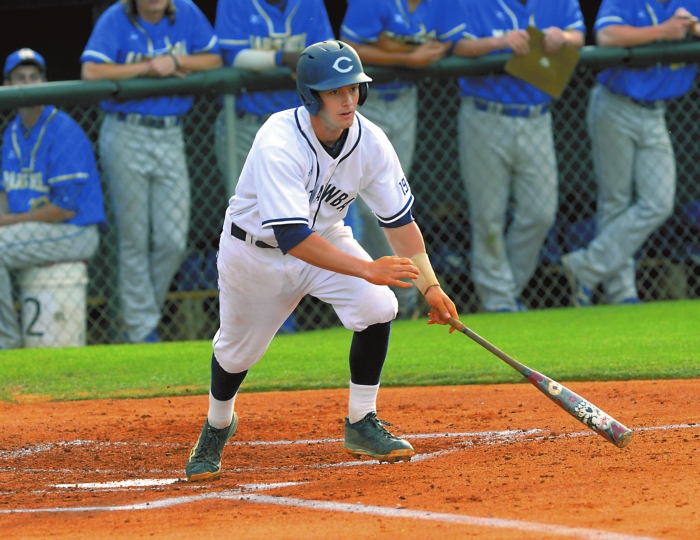 SALISBURY — Will Albertson set the bar so extraordinarily high in 2015 that his encore season, while one of the greatest in Catawba baseball history, has been taken for granted.
When Albertson got three hits, fans shrugged. They expected him to get four.
The right-handed hitting catcher/outfielder hasn’t been the scariest hitter in Division II this time around, just one of the most consistent.
“I knew I wasn’t going to be able to put up the same kind of numbers I did last year — pitchers weren’t going to let me put up those numbers,” Albertson said. “So this season hasn’t been as loud, but it’s still been a season I’m very proud of.”
After 53 games, Albertson is batting .416 to pace the Indians. He also leads the club with 61 runs scored, 89 hits, 15 homers and 59 RBIs.
Albertson’s 2015 season, his debut at Catawba after transferring from Campbell, was an insane thrill ride of extra-base hits and broken records. He batted .467 to lead D-II, and his 114 hits included 26 homers. He drove in 91 runs in 62 games. He walked more than he struck out.
Albertson was a 40th-round draft pick after a season in which he, Craig Brooks, Blake Houston and T.J. Wharton led Catawba to a national runner-up finish, but the New York Yankees never made him much of an offer.
So Albertson was back at Catawba for his senior year. His second season in Salisbury has been more about enhancing his catching skills than piling up offensive stats.
“This year has helped him behind the plate,” Catawba coach Jim Gantt said. “He has a good arm and a quick release, and teams haven’t run on us much. He’s also become a better receiver. We’ve had very few passed balls.”
Albertson has caught 32 games, with slugger Zac Almond, another D-I transfer, catching the rest. Albertson has started in left or right field 20 times. He was the DH for one game.
Albertson’s return as the No. 3 hitter has given Catawba another shot at a national title. He’s produced a five-hit game, two four-hit games and eight three-hit games. He’s driven in two or more runs 17 times, and he’s reached base by walks or hit by pitches 43 times, while striking out only 17 times. His on-base percentage is an impressive .508, although that’s still down from last year’s stunning .531.
Catawba (34-19) will leave for Georgia early on Wednesday for the Southeast Regional at Columbus State. The Indians will play familiar opponent Belmont Abbey in Thursday’s opening round.
“I’m where I want to be and this team is where it wants to be,” Albertson said. “Belmont Abbey is strong, but we don’t mind playing them again. We owe them. They beat us twice and they beat us in a football game at Newman Park.”
Catawba lost 24-22 to Belmont Abbey at Newman Park on April 6 in the wildest game of the season. That actually was one of Albertson’s finest nights — five hits and four runs scored.
Albertson experienced a mild slump in March. He wasn’t getting much to swing at, and he temporarily lost his rhythm at the plate.
“I was trying to do too much, trying to drive pitches I can’t drive,” Albertson said. “I was expanding the strike zone, and that’s not me.”
Gantt moved Albertson to the leadoff spot in an effort to get him more strikes to hit. That experiment lasted nine games. Albertson thrived in the leadoff role, but after other bats got untracked, he returned to his familiar No. 3 spot on Gantt’s lineup card.
“The stats Will has put up might not be quite what they were last year, but those are still astonishing stats,” Gantt said. “He’s been huge for our lineup. He shows up in what everyone else around him is doing. He’s helped the guys who hit behind him (Malachi Hanes and Chance Bowden) have great seasons. On top of that, he’s been a great leader. A leader by example.”
Physically, Albertson remains an unlikely slugger. He’s 5-foot-11, and while he’s listed at 190, he appears almost skinny after the rigors of a long season that began in early February.
“I weigh 180 — and that’s on a good day,” he admitted with a smile.
There’s another MLB draft coming up in June. Obviously, Albertson hopes to hear his name called again. His dream since childhood has been to play pro baseball.
Whatever happens next, he’s given Catawba two slugging seasons that won’t be forgotten anytime soon.
“Coming to Catawba was the best decision I ever made,” Albertson said. “I got to play in a great baseball environment for great coaches and with great teammates. My one regret is I didn’t play for Catawba for four years.”