The Dart: Pencil in McCanless golf group for Sunday afternoons 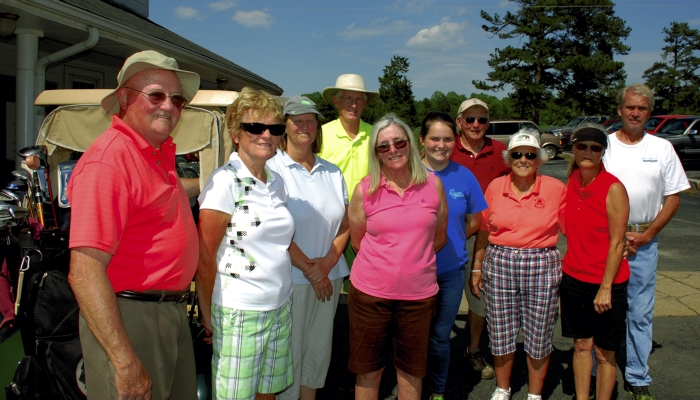 Mark Wineka/Salisbury Post The 'McCanless Couples' golf group varies in size from Sunday to Sunday. On this day, 10 players teed off for nine holes at McCanless Golf Course. Ty and Beverly Cobb are at the far left.

SALISBURY — When they moved to North Carolina 11 years ago, Ty and Beverly Cobb heard of a group playing golf every Sunday afternoon at McCanless Golf Course.

“McCanless Couples” immediately took in the Cobbs — that’s just the nature of this loose-knit bunch — and they’ve played many Sunday afternoons ever since.

“They call it the couples group, but it’s whoever shows up,” Beverly Cobb explained. “You don’t sign up, you just show up. It’s a fun group.”

On this particular Sunday, which was Mother’s Day, 10 people participated.

Seaford sends in the results of “McCanless Couples” to the newspaper every Sunday evening. The winners and runnerups are mentioned, along with who sank the day’s longest putt and who was closest to the pin on a tee shot.

The group usually plays captain’s choice. The players tee off at 2 p.m. and only play nine holes, making for a quick, enjoyable Sunday afternoon. Enjoyable, if you’re playing well. The cost is reasonable — $12, which includes a cart.

There is no age requirement. Recently, the youngest player has been middle-schooler Lexie Miller. The other end of the age spectrum is something you don’t discuss in mixed company.

Seaford keeps track through the year of the points every player is accumulating. At season’s end, the group plays an 18-hole finale, and the players usually have a cookout with prizes given out based on the points from all the Sunday afternoons.

In years past, when the McCanless Couples used to have a 3 p.m. tee time, they often finished around supper, so many of the players would go out to eat with each other.

Those who’ve been playing for a long time laugh, because restaurants they used to patronize have all closed. Maybe they were bad luck?

The folks with McCanless Couples also like to venture out sometimes for day trips to other golf courses. This usually happens on a Saturday, and the most recent field trip took the players to Pilot Mountain.

Longtime players David Huneycutt and Seaford can’t even tell you when McCanless Couples started. Was it 2003? 2004? They decided the best thing to say might be the early 2000s.

The level of play varies. Seaford, for one, knows her way around the links.

“She probably knows every blade of grass on this course,” Beverly Cobb says.

Ty Cobb offers that Seaford’s talent at golf comes from her ability to cheat and get away with it. He’s kidding, of course.

But with many of the golfers, the Sunday afternoons are only one day within a busy week of play. Beverly Cobb plays with another group at Corbin and another group at the Country Club of Salisbury, besides hitting it with Ty when she can.

Ty hopes to be getting back to playing with a bunch of guys on Tuesdays. And Seaford said she plays “every day I can.”

The winners this day were actually part of a foursome — Miller, Susan Wydner, Azalee Storey and Harry Owen. They shot 1 over on their nine-hole round.

Being able to be back on the golf course enjoying these Sunday afternoons means a lot to Ty Cobb, a retired Army ranger. He has battled back from two strokes and open-heart surgery in January that led to his receiving a cow valve.

“I was lucky with my stroke,” Ty said, referring back to last Oct. 7.

Where else would his stroke have happened but at a golf course? He and Beverly were playing hole No. 12 at the Country Club of Salisbury when it occurred. Beverly called 911 from the course, and emergency responders reached Ty in plenty of time.