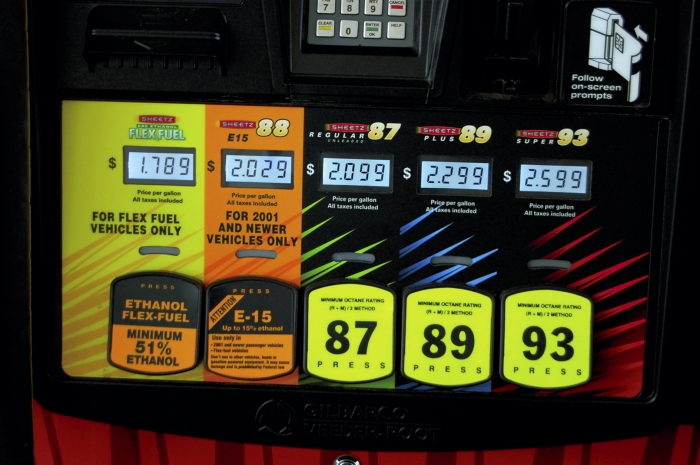 According to the Alternative Fuels Data Center of the U.S. Department of Energy, 97 percent of the gasoline sold in the U.S. has up to 10 percent ethanol, or E10, and automakers approve E10 blends for their gasoline vehicles.

Ethanol fuel is renewable and domestically-produced. It is made from plant material, like corn, sugar cane or grasses, according to the Data Center.

Sheetz, which offers made-to-order food and coffee along with gasoline, now offers E15 and E85 at many of its North Carolina locations.

He said Sheetz has not done away with its regular unleaded gas.

“It wasn’t an either-or,” Lorenz said. “It was additive. We just wanted to give customers another choice.”

Lorenz said Sheetz decided to provide higher blends of ethanol in North Carolina because the company wanted to start offering the product in a large enough market that customers could find the product fairly easily. North Carolina has 80 stores, and 60 of them have the higher ethanol blends of gasoline.

E15 gasoline is blended with 10.5 to 15 percent ethanol, according to the Data Center.

E85, or flex fuel, contains even more ethanol, 51 to 83 percent, and can be used in flexible fuel vehicles.

A gallon of ethanol has less energy, and therefore lower fuel economy, than a gallon of gasoline, according to the Data Center.

According to a AAA news release from 2013, AAA’s automotive engineering experts thought continued use of E15 could cause problems like accelerated engine wear and failure, fuel-system damage and false “check engine” lights in some vehicles. And when surveyed, 95 percent of consumers at the time did not know enough about E15, which could lead to consumers using E15 for engines that were not designed to use it.

According to Growth Energy, an organization that represents the producers and supporters of ethanol, virtually all cars with model dates after 1980 can run on higher ethanol blends like E15, and consumers should check owner’s manuals or ask their mechanic to see what blends are best to use for their vehicle.

Since ethanol is a clean fuel, it helps reduce petroleum use and greenhouse gas emissions. Kelly Manning, vice president of development for Growth Energy, said the fuel is earth friendly.

“The more biofuels you can put into the emissions, the better the air is,” he said.

Gasoline with ethanol in it costs less; Manning said it costs about five cents less per gallon at Sheetz, which can lead to a savings of $750-$2,000 for the average family.

“Not only does it clean the air, but it allows drivers to spend less at the pump,” he said.

Manning also said certain engine technologies can optimize ethanol-containing fuel so that it has the same mileage per gallon as regular gasoline.

NASCAR has even been using E15 gasoline from Sunoco in their cars since 2011.

According to a NASCAR Green article, NASCAR will hit its 10 millionth mile using E15 during this year’s racing season.

Lorenz, the vice president of fuels for Sheetz, said Sheetz has sold “quite a bit” of the ethanol-containing gasoline and the company plans on promoting the E15 and E85 gasoline in the upcoming months.

“The key for us was that it was another choice for the consumer,” he said.