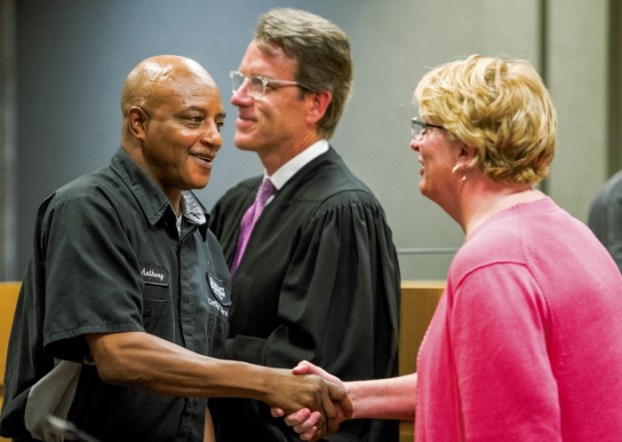 Anthony Belts shakes hands with Catherine Combs, judicial district manager, after receiving his certificate and sharing his story during the incentive ceremony for probationers, held at the Rowan County Courthouse on May 3. Allison Lee Isley/Salisbury Post SALISBURY — The 17 people who stand before Chief District Court Judge Charlie Brown on May 3 have two things in common: Nearly all landed in court because of a crime related to an addiction of some kind, either opiates, cocaine, alcohol, shoplifting or gambling.

And they all say probation — and probation officers — helped them leave their old ways behind.

• “I thought the court system and probation officers were the enemy,” says Anthony Belts, 58. He used cocaine and failed drug tests while on probation, which could have landed him in prison, he said. Then he pointed to his probation officer. “She’s a tough one,” he said, “and I needed that.” He went through a 30-day program and cleaned up his life. In the courtroom, his wife wipes away tears as he speaks. “I got to set an example for my grandchildren and my children,” Belts says. His new opinion of probation officers? “Really, they’re here to help us.”

• “I was raised in these courts,” says Mitchell Varnadore, 29. He says he has been in and out of prison, but his 2014 arrest for shoplifting was different. Varnadore’s probation officer steered him toward substance abuse classes and Alcoholics Anonymous. After growing up in a household where he was taught to steal what he needed, he’s the only member of the family who finally “got up and got out of the house,” Varnadore says.

• “I needed that break in life, that kick in the shorts,” says Dusty Mills, 52. Mills’ gambling had gotten out of hand, so much so that he stole from his church and was charged with larceny. He credits probation officers — and the Lord — for holding him accountable. Now, he says, he gives his wife his paycheck, gets an allowance, stays away from gambling and tries to avoid looking at lottery tickets when he pays for gas.

Mills, Varnadore, Belts and the 14 other people are in court on this day to receive certificates for successfully completing probation or earning recognition as probationer of the month.

“All I can say is this is the most expensive certificate I ever got,” says Bruce Shipton, 60.

Five years after North Carolina’s Justice Reinvestment Act went into effect, incentive ceremonies like the one in Brown’s courtroom reflect the change in the state’s probation and community protection program.

One goal of the reinvestment act was to guide probationers toward treatment programs and classes — and away from committing more crimes. According to the N.C. Department of Public Safety, the cost of incarcerating an inmate is $83.29 a day, or $30,400 a year, while community supervision costs a fraction of that, $4.60 a day or $1,679 a year.

Brown, a district court judge in Rowan for 18 years, says the changes came after the get-tough-on-crime approach filled the state’s prisons to overflowing in the 1990s and recidivism was high.

The spirit of the new law set a new direction, he says.

“That’s not how we define success in the criminal justice system any more,” Brown says. “It’s not about locking someone up. … It’s not about celebrating the misery of others.”

The new approach is targeted smartly to curb recidivism, according to Brown.

The emphasis is on helping probationers get counseling and skills to stay out of trouble. They complete assessments so officers can determine the needed level of supervision and use evidence-based practices to address their needs and challenges.

It’s based on a medical model; Brown compares it to precision medicine. Some might say with a healthy measure of social work thrown in.

“I used to be on drugs real bad,” Marshall Wellington III tells Brown and the court during the incentive ceremony. A tall, deep-voiced man, Wellington has a “Stay Connected” band among the bracelets on one wrist.

When he was in Georgia, he and his wife were shot over $150 worth of crack cocaine. She died; he was left for dead.

“I decided then that I was not going to do drugs no more,” Wellington says.

He moved to North Carolina, where he’s been completing probation for an earlier sentence. He’s been going to the VA Medical Center, Oxford House and Narcotics Anonymous meetings and has started a ministry of his own, he says.

“I don’t want to see another addict die,” Wellington says.”I commend this court and this county … for good, hard work.”

He’s working on staying clean and being an example to other addicts to convince them “they don’t need to do that no more.”

Incentive ceremonies were designed to give probationers recognition and — for the first time in some of their lives — celebrate their successes.

An unexpected byproduct has been the gratitude they express for probation officers.

“I don’t want to be back in this room ever again,” Brian Pless, 44, tells the court, and he praises his probation officers. “All three gave me a positive outlook.” They helped him learn to make better decisions, he says, and now he’s working harder for his future.

Using the new assessment tools — asking offenders about their past, life circumstances and more — opens up conversations officers and offenders seldom had before.

Catherine Combs, who heads adult probation in Rowan and Cabarrus, says officers are sometimes amazed at what they learn. One officer who had supervised a repeat offender over and over said she had no idea the man had been sexually abused as a child. “This tool brought out things she’d never known,” Combs says.

Knowing the life events that drive a person’s behavior opens new opportunities to bring about change.

“I really would have liked to be a probation officer now,” Combs says.

Probation officer Michelle Romer — the one who helped give recovering gambler Mills that “kick in the shorts,” says the job gives her the satisfaction of bring able to affect change.

The prevalence of addiction problems among the probationers receiving certificates on May 3 is representative of the people Romer sees. They tell themselves they can quit but are always chasing the next high, she says. The need to support their habit leads to crime, and soon they are frequent fliers in the courts.

“It’s not cheap to go in and out of the system,” Romer says. In addition to court costs and fines, there’s a $40-per-month supervision fee. If an offender has a court-appointed attorney and is found guilty, there’s also the attorney fee to be paid.

Breaking the cycle of winding up in trouble takes structure.

“I have a couple of individuals who come in weekly,” even though they are only required to see her every 90 days for compliance.

Accountability, encouragement and kicking addiction are frequently mentioned by the probationers.

• Alex Hanson, 22, says he was hooked on opiates for about two years. “I was spiraling out of control very quickly,” he said. After he lost his job, he did what he wanted; there was no one to tell him to do anything, he said. Probation changed that. “It slowly gives you structure,” Hanson said. “It helps keep me accountable. It’s one of those things, you get out what you put in.”

• “Alcohol’s my demon,” said William David Kennedy, 52. With DWI arrests going back many years, he finally “got sick and tired of being sick and tired.” Probation officers have a tough job, he said, but they pointed him toward the programs he needed and gave him encouragement.

• Cindy Dixon said she’s been in and out of trouble for 40 years. “It’s all a matter of the choices you make,” she said. She decided to change and to “quit throwing money away on drugs.”

The most dramatic turnaround story came from Mitchell Varnadore, the young man who said he grew up in the courts.

He was introduced to drugs when he was 9 or 10, the first time with his mother, he said. “Everybody in my mother’s house, we all stayed up and partied.”

Varnadore stole to support himself and his habit. His most recent arrest came in 2014 after he and another drug addict were caught shoplifting in Walmart. Varnadore says he was high on Xanax and pain pills. They went in to get baby clothes but started grabbing anything in sight, stuffing it into pockets and a bag.

After they were cited for shoplifting the woman with him left, but he went back into the store, tore up his citation, cursed at the officer and tried to fight him.”

He landed in jail — again.

“I realized what had happened the next day,” he said.

“He worked really, really hard,” says Bumgarner. She pushed him, she says, but she could tell that he wanted to do better. “He came in wanting to take a drug test,” she said.

Varnadore says he realized the way he had been living was not right. He said his fiancée, Rebecca Meade, was his backbone.

Brown tells Varnadore he deserves a lot of credit.

“There is a better way, and you’re showing you can succeed.”

Fond memories of the old days  In the “Olden Days” — back in my day —  things were different …... read more