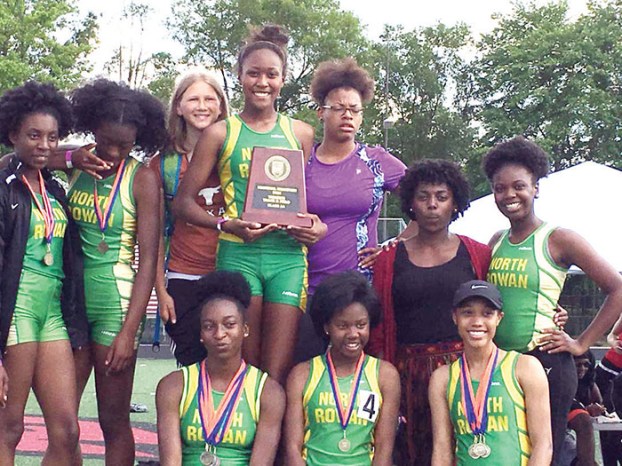 SPENCER — North Rowan’s track and field girls added to their Rowan County and Central Carolina Conference championships on Saturday at Monroe, tying the hosts for the 2A Midwest Regional title with 99 points.
“When Monroe went 1-2 in the shot put for 18 points and our girl (Chevy Blaire) was fourth, I thought we were in trouble,” North coach Phillip Bush said. “We knew Monroe was going to get a lot of points in the jumps.”
North climbed back in the race with Payton Russell’s victory in the 100-meter dash.
Russell’s best event, hands down, is the 400 where she’s an elite performer. She broke the 400 meet record in the 2A State Championships as a sophomore in a blazing 55.70 seconds.
Russell’s second-best event is the 200. The junior’s third-best is the 100. She came into the regional top-seeded in the 200 and 400 but with a fifth-place seed time in the 100.
She placed second in her heat in the 100 prelims and posted the fourth-best time among the girls qualifying for the final. But then she went out and won the main event in 12.60 seconds.
“I told her to just relax and let it go and she got us right back in the meet,” Bush said. “It was like, ‘Wow, Payton just won the 100. We can still do this.'”
Blaire won the discus by 2 inches over Monroe’s Veranda Webb. That turned out to be big.
North got a pile of points from hurdler/jumper/sprinter Brianna White, as expected. The junior had a second and a third in the hurdling events and added a second in the high jump.
Freshman Lakayla Birst placed third in the high jump, while senior Tabitha Tulloch contributed a second in the 100 hurdles, edging White in that event.
“Tabitha came out when she was a freshman, hurt her ankle and didn’t come back,” Bush said. “Before the season, she sent me a text and said she was coming back for her senior year. She’s made all the difference for this team.”
After doing the unexpected in the 100, Russell did what she was expected to do in the 200 (25.74) and 400 (57.85). Those two wins meant 20 more points for the Cavaliers.
North’s 4×200 team of Tulloch, Birst, Janiyah Hall and Rochelle Bowman placed fourth in 1:50.50. That top-four finish meant that unit moved on to state competition, but Monroe won the event.
Girls can compete in four events, and that fourth event for both Russell and White is the 4×400 relay. They teamed with Tulloch and Bowman.
Bush’s 4×400 strategy is simple: get the lead and hold it. So Russell runs the first leg, not the anchor.
“That’s something I learned from Coach (Robert) Steele,” Bush said. “Make them catch you.”
The North girls ran 4:09.79, their best of the year. They beat second-place Monroe by more than four seconds. The teams finished tied at 99.
In 2015, North’s girls were second in the county, conference and regional, so the program has taken a step in the right direction.
Now the Cavaliers turn their attention to Saturday’s 2A State Championships in Greensboro. They scored 42.5 points last year and placed third, well behind Burlington Cummings and Carrboro.
Russell placed in the 100, took second in the 200 and won the 400 in last year’s meet. White placed in both hurdling events and the high jump. North also got points from Blaire in the shot put and from the 4×400 relay team.
North’s girls won 2A state championships in 1999, 2000 and 2001 and added a 1A state title in 2010.
“The girls know about the North Rowan track tradition,” Bush said. “They make good grades, they listen, and they do the things they’re asked to do. I couldn’t be prouder of what they’ve done this year.”
Bush said perennial power Burlington Cummings, which has won 10 girls track state championships in three different classifications, will be the team to beat in Greensboro.
In Saturday’s 2A Mideast Regional, Cummings went 1-2-3 in the 100 hurdles and long jump and also was strong in the sprints and shorter relays.
Cummings’ Layla Moore is the defending 2A champ in the 100 and 300 hurdles, while Kenyae Majors is the reigning champ in the long jump. Moore and Majors also ran legs on the 4×100 championship team.
“Cummings has had great girls track for a long time,” Bush said. “We’ve got two injuries and we’ve lost some legs, but we’re going to give it our best. We hope to give Cummings a run for their money.”
•••
NOTES: The 2A and 4A meets will be conducted at the same time on Saturday at the Irwin Belk Track at North Carolina A&T. Gates open at 8:30 a.m. for spectators. The meet begins at 10. Admission is $10.

From staff reports Salisbury’s girls soccer team lost, 7-2, at undefeated Forbush in the second round of the 2A playoffs.... read more