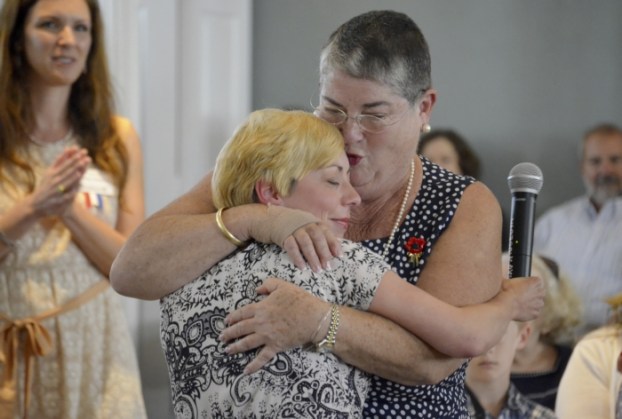 Kaye Brown Hirst gives a hug to Tricia Creel, who has worked by her side for the last 13 years, during a retirement party for the longtime Rowan Museum director. Hirst has been a fixture at the museum for the last 20 years. Shavonne Walker/Salisbury Post

Kaye Brown Hirst gets an affectionate farewell as museum director

SALISBURY —  How can you measure 20 years? That was the question asked during a retirement reception for soon-to-be former Rowan Museum Director Kaye Brown Hirst. Apparently the answer is with lots of hugs and kisses, funny stories and plenty of surprises.

Hirst will retire later this month, but before she walked out of the door a reception was held in her honor and attended by family, friends, museum staff and volunteers as well as community leaders.

She began her job thinking she was just volunteering for $20 a week, but soon found out this job entailed more than just volunteer work. Hirst said the Utzman-Chambers House on Jackson Street was her first office before the museum’s collection was moved in 1999 to the old Rowan County Courthouse where it remains today.

“I started with a notebook and a card table I found when I cleared out the Utzman-Chambers House,” she said.

It wasn’t until then County Manager Tim Russell called Hirst and told her he needed to give her something. He “gave” her the courthouse, which has paved the way for countless exhibits, displays and events.

During the reception Hirst was presented with many surprises, including receiving a replica key made of the Old Stone House. Hirst is a descendant of  the historic property’s  builder, Michael Braun. She has organized many events at the home including the German Christmas Celebration and taught school groups during tours for history camp. She was recently given the N.C. Museums Council’s professional service award, their highest honor.

The garden outside of the museum was named in her honor during the ceremony and Hirst was presented the Order of the Long Leaf Pine, the state’s highest civilian award. Hirst was nominated by best friend Margaret Basinger.

“After 20 years of service to this museum, it truly bears her stamp. Thanks to Kaye, thousands of Salisbury youth have enjoyed History Camp and learned to love history as she does,” said City Councilwoman Maggie Blackwell said before turning the microphone over to Basinger.

Basinger said later she’s always known how important the Long Leaf Pine was and she knew only a select few “special North Carolinians deserve it.”

“No doubt about it my dear friend was one of those few.”

About three months before the presentation, Basinger simply looked into the process of nominating someone for the award, nominated Hirst and later received the plaque.

“She’s like a mother to me,” said Tricia Creel, longtime friend and the museum’s education coordinator.

Creel said she was thankful for Hirst for taking her on even though she knew nothing about working in a museum. The two have worked alongside each other for 13 years.

“She believes in you. I just love her and I love being here,” Creel said, getting teary-eyed.

Friend Brenda Zimmerman, who recently retired as director of life enrichment at Trinity Oaks health and rehab, said the best advice she could give her friend was to say no. People will still ask Hirst to help with this or that, but she suggests Hirst just take time out for herelf, Zimmerman said.

The Dart: Pencil in McCanless golf group for Sunday afternoons