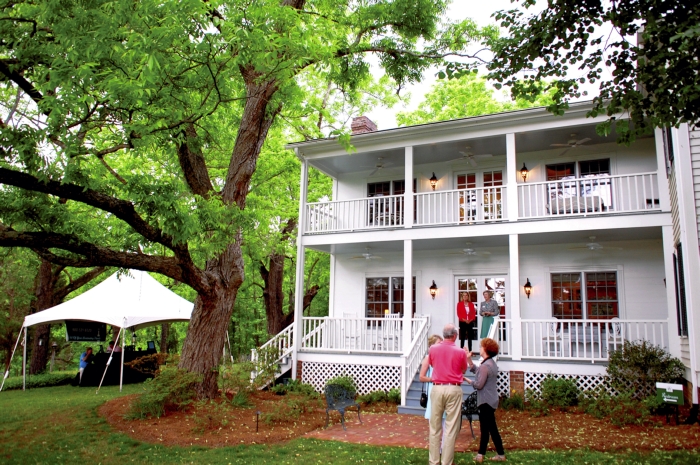 Mark Wineka/Salisbury Post A view from the side yard at the 1869 Henry Connor Bost House.

FRANKLIN TOWNSHIP —  Dr. Donald Lomax and his wife, Marie, bought this historic property in 1961 and on many Wednesday afternoons and most weekends, it became a country retreat for the couple and their seven children.

The kids would ride horses, explore Second Creek and ramble through the 1869 house built for Henry Connor Bost, a Confederate captain in the Civil War.

The driveway out front was once a section of the old Mocksville Trading Path, which Daniel Boone would have used on many of his trips to and from the back country.

The Lomax children found all kinds of artifacts on the land, too, indicating past Native American settlements.

The Henry Connor Bost Home and Farm, which is listed on the National Register of Historic Places, became even more of a focal family point after Don and Marie Lomax renovated and modernized the house  in 1993 and made it their full-time residence.

Grandchildren then became the new explorers of the house and the 135-plus acres around it.

A well-known Salisbury physician whose office was at the Ketner Center, Don Lomax died in 2003.

In 2014, Marie moved to Raleigh, where several of her grown children also live, and the seven siblings were left with a question — what should happen with the treasured house and property at 285 Potneck Road?

It had always been their private oasis, and everybody wanted it to stay in the family. In the end, the brothers, sisters and spouses decided to go public by marketing it as a special event venue for weddings, engagement and holiday parties, corporate retreats, company picnics, birthday celebrations and fundraisers.

The Henry Connor Bost House & Farm held its first event, a wedding, last October, and the venue offers a backdrop of pasture and woodlands, a weathered barn, picket fences, English boxwoods and, inside the house, all the original  woodwork, heart pine floors and brick along with the modern two-story section the Lomaxes added on in the early 1990s.

There are porch swings and swings attached to the limbs of sprawling black walnut trees. There’s a swimming pool, where guests are allowed to mingle (but not swim, for liability purposes).

An upstairs balcony  presents great wedding photo opportunities, and it links to the master bedroom, which now serves as a bridal/bridesmaid suite. The downstairs has a groomsmen room with attached bathroom, or some packages provide for the groomsmen to use a cottage farther down the lane.

Basic packages include a parking attendant, a preparation kitchen for caterers, a picturesque gazebo, and renters also can add a golf cart valet, dance floor, stage, an enclosed tent, heaters, fans, tables, linens, chairs and more, depending on their custom packages.

The Henry Connor Bost House & Farm relies on Barwick as its on-site manager. Otherwise a resident of Raleigh, she stays in the groomsmen’s cottage before, during and after events. Several years ago, she and her husband bought and moved that late 1800s house, which is historic in its own right, from U.S. 601 to the farm.

It has served as their family’s home away from home whenever they travel back to Rowan County.

Barwick says the many siblings decided the only way the venue was going to work was to have one person as the manager. She gave up her job as a medical speech pathologist to work and promote the farm full-time.

Offering the house and farm as a venue also was a way for the property to pay for itself, while also keeping it fresh and vital.

When the Lomax family wasn’t spending time at the farm, they lived in Salisbury in a house in Forest Hills.

The family held an open house at the property last Thursday evening. Barwick acknowledges that many people still don’t know the Henry Connor Bost House and Farm is available for their special events or retreats.

Besides the house’s inclusion on the National Register, the farm’s acreage is protected by the LandTrust for Central North Carolina. The property extends on both sides of Potneck Road, and as evidenced by the hay in the front pasture, some of the land is still being farmed.

A water pump original to the house stands out back. Barwick also points out a sunken spot in the ground where an ice house once stood.

Only three families have ever been connected with the Henry Connor Bost House — the Bosts, the Kellys and the Lomaxes.

Henry Connor Bost lived from 1840 to 1887 and was educated at Trinity College (later Duke University). In 1861 at the beginning of the Civil War, Bost entered Company F of the Ninth Regiment Cavalry, and he would rise to the rank of captain.

On furlough in 1865, he married Dorcas Fraley. His house was one of the few built in the years immediately following the Civil War. Davyd Foard Hood’s book, “The Architecture of Rowan County,” said the frame house “illustrates the continuation of the vernacular Greek Revival style from the antebellum period into the postwar era.”

Bost would go on to be elected to the state legislature in 1878. He also served as vestryman at St. Andrew’s Episcopal Church, where he is buried.

The family retained ownership until selling it to the Lomaxes in 1961.

Sally Lomax Turner was married at the Henry Connor Bost House 30 years ago, and her daughter Sally was married here last October. Turner served as one of the family tour guides through the house last Thursday.

The family still has many of its holiday gatherings at the house, the oldest part of which has its original wood ceilings and walls.

“It’s even prettier than I remember,” said Bud Mickle, one of the Thursday evening visitors.