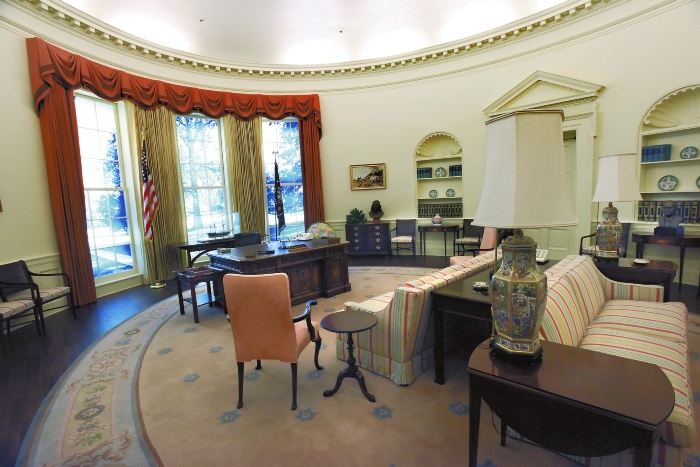 This reproduction of the Oval Office during the Carter administration is on display at the Jimmy Carter Library and Museum. Carter’s life, from his birth in Plains, Georgia through his presidency, is presented in photos, documents and more. Wayne Hinshaw/For the Salisbury Post

ATLANTA — On a recent trip to Atlanta, I had an opportunity to tour the Jimmy Carter Presidential Library and Museum. It is my first visit to any of the presidential libraries. It is a massive building with gardens, flowers, walkways and a pond. Off in the distance, between the tall trees, the skyscrapers of downtown Atlanta are visible under the very stormy skies and dark clouds. It is an impressive place.

There in the middle of the busy, noisy, hustling, bustling city of Atlanta is this quiet sanctuary where there are thousands of papers, correspondence, photos, videos and the other magic moments of President Carter’s four-year administration. The building has the feel of a spiritual setting of deep respect for the former president and the idea of our form of government in America. I’m not attempting to elevate President Carter above any of the other presidents. I would think that all the presidential libraries have this same capacity for reverence and dignity.

Drawing the most attention from visitors was the full scale reproduction of the White House Oval office as arranged and decorated during the Carter Administration. Personal artifacts from the Carter years in the Oval Office were the Sailor Prayer given to Carter by Navy Admiral Hyman Rickover. A model of the Revolutionary War ship “The Rattlesnake” sits on a table behind the president’s desk. There is a “Bronco Buster” sculpture and a glass Democratic donkey mascot. There is a plaque with President Harry Truman’s famous words, “The Buck Stops Here.”

I was fortunate to visit the library on the day with 131 foreign Fulbright Scholars students who were gathered in Atlanta for a spring conference.  All of the foreign students entered the Oval Office with the reverence of attending a religious service. They all stood completely quiet and studied the room.

A male student, one of eight from Afghanistan, asked me to use his iPhone and photograph him in the Oval Office. He is a first-year student here in the U.S. studying law and public policy. On shaking hands, he said that one day he hopes to reach the oval office of his home country. I responded, “I hope that you achieve that office.” He nodded his head and smiled.

James Earl Carter was the 39th president of the United States, serving 1977 until 1981. He was always known as Jimmy Carter, a Georgia peanut farmer of the Baptist faith who made his way from the farm to the Naval Academy, to an officer in the Navy, back to Georgia as governor, and then to the White House.

As a Democrat, he ran against Republican President Gerald Ford to win the office. His presidency was during a time of national financial inflation and unemployment. He was faced with a heightened Cold War with Russia invading Afghanistan and Iran taking the U.S. embassy staff as hostages for 14 months.

He was successful in bringing Egypt and Israel together in 1978 to sign the Camp David Accords for peace between those two countries. His administration dealt with energy shortages. He was able to establish the U.S. Department of Energy and Department of Education. He expanded the National Parks in Alaska by 103 million acres. Treaties involving the Panama Canals were signed by Carter.

He was never able to have the influence on human rights that he always hoped during his administration.

Walking through the museum filled with photos and videos of the Carters, all the events of his life from a baby in Plains, Georgia, until the last day he was in office are presented. There is a giant color photo of the U.S. Embassy staff getting off a plane after being released on Carter’s last day in office.

Black and white photos of Carter as a baby and then a shirtless kid on the peanut farm line the wall near the entrance to the museum. The Carter farm had no electricity or running water in the house until Jimmy was a teenager.  He worked in the blacksmith shop and plowed the fields barefooted behind a mule. Reportedly, Carter said, “I preferred to plow without wearing shoes, and I remember vividly the caress of the soft, damp and cool, freshly turned earth on my feet.”

During his years in Plains, racial segregation was part of life in Georgia. However, the museum has a section devoted to the African-Americans that were involved with Carter on the farm. The exhibit says that he learned most of his knowledge about farming from a black man named Jack Clark and his wife Rachel who young Carter spent hours with working on the farm. Tenant farmer Willis Wright was also influential in Carter’s life. Carter is pictured being held in the arms of Berta Mae Lester, an African-American lady, there on the farm. “Colored Restroom” signs are on display that were from Plains during Carter’s early years.

The museum has a section designed to resemble the inside of a ship which deals with Carter’s navy years at the Naval Academy and his marriage to Rosalynn Smith on July 7, 1946.

Reproductions of the Carters’ wedding ensemble are displayed behind glass next to a portrait of Jimmy in Navy uniform with the handwritten message to Rosalynn, “Darling, I love you with all my heart — for all my life.” Jimmy.”

Carter’s old Argus 35 mm rangefinder camera that he used while in the Navy is displayed. It is very much the like the first 35 mm camera that I owned in high school. My camera was a little more advanced. I had an Argus C3 Automatic Rangefinder 35 mm camera.

Returning from the Navy, Rosalynn and Jimmy lived for a short while in government-assisted public housing.

Carter’s life is followed in a section called “Public Life,” detailing his life as a state senator and then on to the campaign for the governorship of Georgia.

A photo showing Carter and President Ford in one of their debates is next to the inaugural photos from Jan. 20, 1977, with the Carters walking down Pennsylvania Avenue. The inaugural celebration photos of the black tie events include dancing, smiling and a Native American dressed in a full native headdress of colorful feathers,

All of the historic events and treaty signings of the Carter Administration mentioned earlier are represented with large photos, some in black and white, as was the custom of the times, and some in full color. All have full explanations of what the events were.