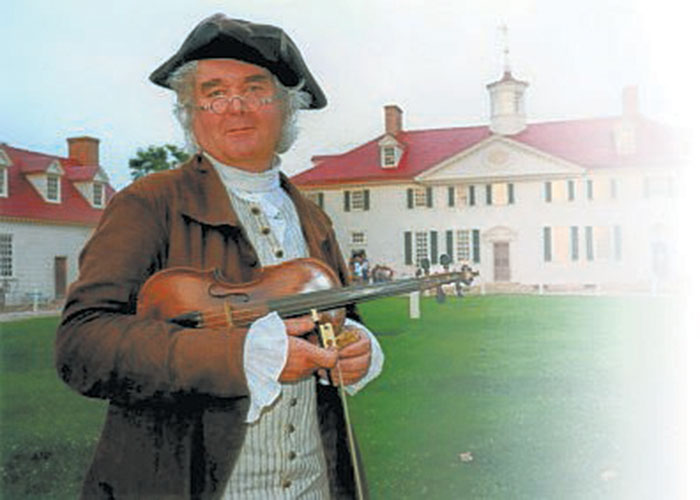 SALISBURY — The myths and legends related to George Washington abound. The wooden teeth. His Herculean toss of a silver dollar across the Potomac River. The chopping down of the cherry tree and his inability to tell a lie.

Historians have debunked many of these stories, which through repetition even wormed their way into textbooks.

But there are things we definitely know, or think we know, about Washington’s visit to Salisbury on May 30, 1791, and several of them will be re-created Saturday during a 225th anniversary celebration of that event.

There will be a parade welcoming Washington to town, two re-enactments of a ladies’ tea which Washington attended, speeches by Washington and the men who officially greeted him, authentic period music and dancing, Washington’s public farewell and an evening costume ball featuring a four-course early American dinner.

The things we know for sure: Washington came here, spoke here, dined here, had tea here and slept here.

Mixed in Saturday with the re-creation of the pomp and circumstance related to Washington’s visit is a daylong festival downtown from 10 a.m.-4 p.m.

Craftsman and artisans will be giving demonstrations and displaying their wares. There will be militia demonstrations and re-enactments of early camp life. Washington artifacts, including his personal letter to Salisbury, will be on display at Rowan Public Library.

A special musical guest will be Robert Mouland of Geigertown, Pa. He expertly plays period instruments such as the hurdy-gurdy, fiddles, 18th century guitars, an Irish harp and the flageolet. He’ll be located in front of Rowan Public Library.

Veteran Revolutionary War and Civil War re-enactor Lynn Bull of Goldsboro will be playing the role of George Washington throughout the day and evening.

Why go to the trouble of celebrating George Washington’s visit 225 years after the fact?

“Without George Washington,” says historian and Rowan Museum President Terry Holt, “there is no United States. He is that important.”

So what are some other things we know about Washington’s visit to Salisbury?

• At the skirt of town, about 40 boys in uniform and each wearing a bucktail in his hat as a symbol of independence saluted the president as he rode by. According to an account written by the Rev. A.W. Mangum, the sight of the boys “was very pleasing to the president,” who also described it as the nicest thing he had seen.

• Salisburian John Steele, a member of Congress at the time, had met Washington in Mecklenburg County and accompanied him back to Salisbury with the rest of the president’s entourage. Washington wrote in his diary from this Southern Tour that Steele “was so polite as to come all the way to Charlotte to meet me.”

• A big crowd greeted the president in Salisbury on that Monday morning, and, according to Archibald Henderson’s account of Washington’s Southern Tour, the president “‘frequently gave the people opportunity to see him.”

• Much of the crowd greeting Washington had assembled at the courthouse in the public square. An artillery company s discharged its “brass six-pound pieces” 15 times in the president’s honor.

• Washington set up quarters at the Yarborough House, which was located near the middle of today’s 100 block of North Main Street. It was there a Salisbury delegation of men greeted him.

• The president attended a ball at the Hughes Hotel, about where today’s City Hall stands. The 2016 re-enactors will use this occasion to offer up the day’s 15 toasts to the president.

• Washington also attended a tea at the hotel in the company of about 20 ladies from Salisbury.

Holt, the Rowan Museum president, says about seven to nine people were traveling with Washington, including his personal secretary William Jackson. Several slaves were part of the party, and they loaded and unloaded his wagon.

Martha Washington was not with her husband on his Southern Tour.

When arriving into a town such as Salisbury, where many people were assembled, Washington usually rode in what was described as a “white chariot.” For Saturday’s re-enactment, Washington will arrive in a white carriage.

Other times during his tour, Washington preferred riding his horse Prescott. The president, who stood about 6 feet, 2 inches tall, would have been 59 when he came to Salisbury.

Holt says meeting with people in North Carolina was important to Washington because the state had been among the last to ratify the Constitution. The president wanted North Carolinians to know how crucial their support of the young federal government was.

From various accounts Holt has read, Washington apparently found the town of Charlotte of his day “a trifling place.” And apparently Washington preferred his welcome in Salisbury to his much longer stay in Charleston, S.C., which “just wore on him,” Holt says.

Washington didn’t exactly write glowing words about Salisbury in his diary connected to the Southern Tour.

“Salisbury is but a small place altho it is the County town,” the president wrote, “and the district Court is held in it; — nor does it appear to be much on the increase, — there is about three hundred souls in it and tradesmen of different kinds.”

A tribute for Ralph: ‘He loves you so much’