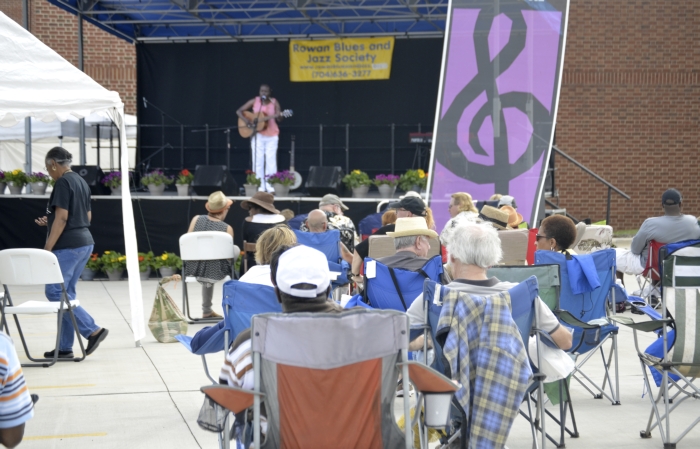 SALISBURY — Sharon Peck danced barefoot at the Rowan Blues & Jazz Festival like nobody was watching. She is a regular fixture at the event, which was held Saturday in the Rail Walk Arts District, and has been attending for the last decade.

“I love to dance. I love the community and like jazz,” Peck said.

She traveled from Chapel Hill to return to the city she left. Peck grew up in Rockwell, but left 20 years ago where she eventually married and raised a family.

“I’ve always loved all kinds of music. It’s always been like a spiritual journey for me ,” she said.

Alisha Carter of Greensboro heard about the event through a friend. The two attended they said because of the atmosphere.

“There was a rich history of the event. It seemed pretty cool, family oriented and low key,” she said. “It’s also a way to get out of the house.”

The two friends also liked the proximity of the event. They said there are other events going on in the region including an annual event in Charlotte, but they wanted something closer.

Hawthorne said before attending the annual event, she knew nothing of blues and jazz.

“It’s nice for the community to come together,” she said.

Lynn Kiser has been attending the festival since its inception when his sister, storeyteller Jackie Torrence was a part of the event.

“I like the blues and jazz singers,” he said.

He counts trumpeter Joe Robinson as his favorite.

Jill Spohn and her husband, Philip, of Spencer, have also been attending since the beginning, she said.

Jill said it’s a good event with good food and plenty of space to spread out. Philip said he was all about the beer and the music.

Patty Paffrath has attended for the last two years. Last year, she and her husband heard the music while picking up her cousin from the train station. The didn’t get to stay long and vowed this year would be different.

“I like that it’s local and I see people I know. The music is great. I love the blues,” she said.

This year Paffrath attended with her husband, sister-in-law and brother-in-law.