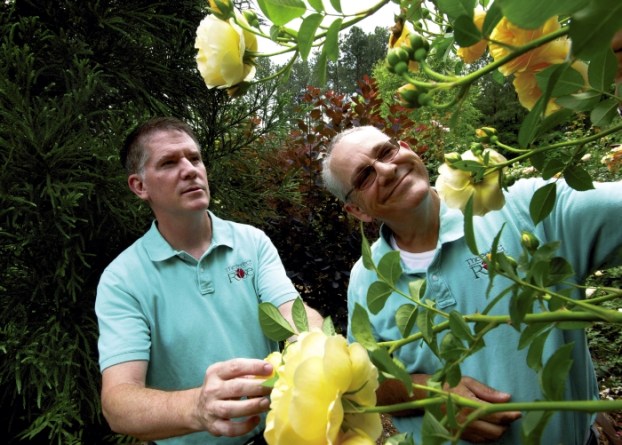 For Myers and Page, roses are ‘Perfect’ business

Host: Rowan Rose Society, celebrating 57 years of rose shows and the 60th year since its founding

General information: You are invited to enter roses to be judged, or stop by and enjoy the winning roses. For more details, visit www.rowanrose.com/RoseShow.

SALISBURY — As Robert Myers and Jack Page stand on the street, looking back at the magnificent landscape surrounding their Mediterranean-styled home, the mailman putters up in his white truck.

“I might bring my wife over here to look someday,” the mailman says, handing Page some letters. “Is that OK?”

This kind of thing happens a lot with their house in Forest Glen. People ask if they can take their prom and engagement photos here. Garden clubs. Women’s clubs, rose societies and Red Hat societies come to visit. The address is always one of the anchors on any local garden tour.

Roses are the stars. Leading up to the front door is a formal, tightly clipped parterre garden holding some 80 roses.

The main garden on the right side of the property has 300 more roses; and the many beds throughout the rest of landscape — gardens to themselves —  hold hundreds more. Within just 0.8 of an acre, the men think they are maintaining about 800 roses in all.

“We lose count,” Page says. ‘It’s probably even more than that.”

It’s easy to say everything comes up roses with Myers and Page, but it’s pretty much the truth. You’ll see them and many other rose experts Saturday when the Rowan Rose Society is host for the 2016 Carolina District Rose Show at the West End Plaza in Salisbury.

The show is open to the public from 1:30 to 5 p.m. Saturday in the former J.C. Penney store at the plaza.

Myers and Page are owners of The Perfect Rose, specializing in rose garden installations and maintenance. They look after 300 rose gardens from Winston-Salem to Columbia, S.C., and some of their bigger clients include Carolina Medical Center, the Catholic Diocese in Charlotte and Alice Brady locally.

Myers and two full-time employees perform most of the hands-on labor, while Page handles the business end of the company.

But the rose obsession doesn’t stop there.

In recent years, the men also have been traveling across oceans through their involvement with the World Federation of Roses, serving on committees and as judges. They have been to conventions in New Zealand and France, and this fall will be heading to Uruguay, Argentina and Brazil.

Myers became an accredited international  judge with the World Federation in 2013, and stateside he is both an accomplished exhibitor and judge, recently winning the Carolinas District Silver Medal.

“Everybody tells me, I’m too young to have gotten that,” Myers says.

Myers serves on the permanent jury for the International Rose Trials at the Biltmore House in Asheville. He also is a master consulting rosarian and horticulture judging chairman in the Carolina District.

Myers is past president and current vice president of the Rowan Rose Society, besides belonging to the Winston-Salem, Charlotte and South Carolina rose societies. Last year, he attended every rose show in the Carolina District.

A consulting rosarian himself, Page also is past president of the Rowan Rose Society and serves as its newsletter editor.

He has an “Ask the Expert” advice spot on The Perfect Rose website and has written articles on things such as rose disease and spring pruning. One of his summaries on a World Federation meeting appeared in the American Rose Society newsletter.

Page is current treasurer for the Carolinas District of the American Rose Society.

In 2007, Myers and Page built their house and gardens in Forest Glen where only tall, pine trees had been standing. Their roses include examples of hybrid tea, floribunda, old garden, polyantha, species, miniature and miniflora.

Page says it’s probably one of the most diverse rose collections in the state. When Myers exhibits at a show, he usually takes examples from all different classes, and sometimes he doesn’t have any competition in the less popular categories.

Myers keeps a shovel handy in case he has to deal with snakes trying to steal eggs or eat little birds in their nests. Deer stay away for the most part, not liking the sound of the pebbles under their feet.

The roses are coming into bloom and exploding with color. They have names such as Shockwave, Graham Thomas, The Gift, and Teasing Georgia, to list only a few. Myers shows how the color on some of the roses bleach under the sun, while others aren’t affected.

A collection of miniatures flourish in one bed. Minifloras dominate the bed on the streetside corner. Polyanthas are in a middle bed on the left side of the house. Having these categories of beds make it easier on Myers when he sets about the task of choosing roses he wants to take to shows.

The men point out their Green Rose from China and the R. omeiensis Pteracantha.

“We saw this in New Zealand and just had to have it,” Page says of the latter rose, which doesn’t have a particulary impressive flower. “It more about the (red) thorns.”

To be a judge, Myers first had to be a member of the American Rose Society for three years. He also was required to take part in a weekend that involved a day of classes, followed by a hard day of testing.

An apprenticeship of judging at six shows followed with other judges serving as his mentors, and his scoring and comments after each show had to be sent in and verified by the American Rose Society. Certification was complete after that, and Myers has to keep up with continuing education. His certification is good for any show in the United States.

Myers has purposely traveled to the West and deeper South to judge shows. “Each area does things a little differently,” he says. To become an international judge, he needed the president of the American Rose Society to nominate and vouch for him, which past president Jolene Adams did in 2013.

Judges score roses on a points system, looking at traits such as form, color, substance, stem and foilage, balance and proportion and size.

Having the Carolina District Show in Salisbury is a big deal. The Rowan Rose Show is always one of the bigger bloom displays annually, and having the District Show will pretty much double its size this year.

Celebrating its 60th anniversary, the Rowan Rose Society has about 30 members on its roll. The society’s beautiful Triangle Garden, located along West Innes Street between City Memorial Park and Summersett Funeral Home, is marking its 40th year, dating back to the country’s bicentennial celebration.

Some 250 roses are in the Triangle Garden.

Sara Hill serves as the current Rowan Rose Society president, and the group, which always welcomes visitors, meets at 7 p.m. on the third Tuesdays of a month at John Calvin Presbyterian Church, 1620 Brenner Ave.

Myers grew up in Lock Haven, Pa., and his love of roses and horticulture in general came from his grandparents. He also learned a great deal from Dr. John Dunn while working at The Rose Doctor in Charlotte.

Page, who grew up in Yanceyville, received his bachelor’s degree in architecture from N.C. State University, and he used to work for the Ramsay, Burgin, Smith firm in Salisbury. After he and Myers opened The Perfect Rose in 2007, Page continued working for an architectural firm in Charlotte until devoting himself full-time to their company starting in 2011.

Visitors often wonder how the men keep their own garden and beds maintained, given the need to keep up with 300 rose clients as well. Page says Myers is the secret.

“In a weekend, he can kind of whip this place into shape,” Page says. “He’s a mule.”

1. In its bid to become an All-America City, for which it is a finalist, Salisbury is focusing its application... read more