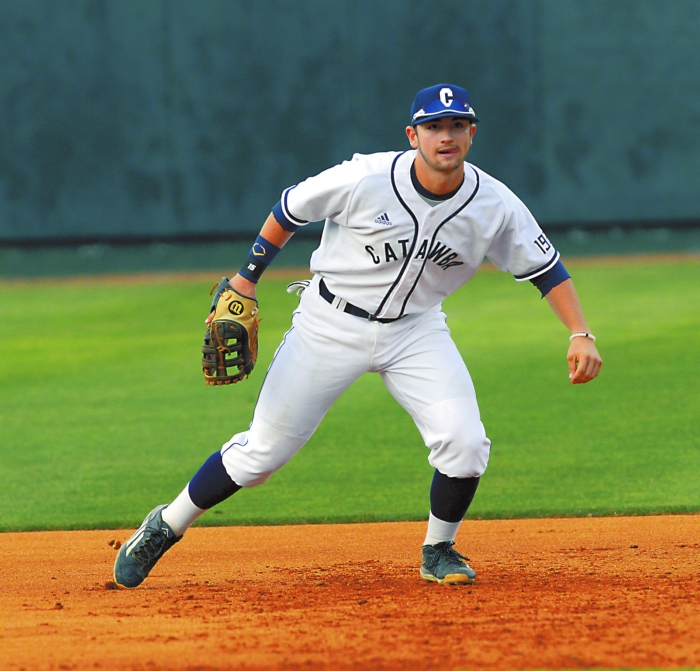 SALISBURY — The best way to break records is to not think about records.
Catawba sophomore first baseman Chance Bowden has kept his mind focused on wins, and the results have been overwhelmingly positive.
Bowden has hammered more doubles this season than anyone in school history. It’s a lengthy history. The Indians’ baseball record book dates back to 1926.
“People talk about it a lot and they ask me about the doubles a lot, but you really don’t think about record stuff at all when you’re playing,” Bowden said. “You can’t think about it. If you do, it’s not going to happen.”
Matt Baker (2004) and Matt Smith (2006) had shared the Catawba doubles record for a while with 30, but Bowden whacked his 31st on May 7 when the Indians concluded the regular season at USC Aiken.
It was a scoreless game in the fourth inning, two out, nobody on, and all Bowden was thinking about was putting himself in scoring position for the next guy. That’s exactly what he did, lining a 1-1 pitch to left-center for two bases.
“Chance has had an amazing year,” Catawba center fielder Luke Setzer said. “He never comes out to the field trying to set records. He’s just trying to do his job for the team, and that’s when things work out.”
Bowden, who is batting .328 with five homers and 47 RBIs, walloped 21 doubles during his career at Salisbury High, and he produced a 15-double summer for the Rowan County American Legion team.
As a Catawba freshman, he produced 13 doubles, sixth on the team. But as a sophomore he’s had an explosion of two-baggers. He has a dozen more than all-star masher Will Albertson, who’s second on the Indians with 19.
Bowden had nine doubles in a single, crazy week in late March to earn National Player of the Week honors. Four of Bowden’s doubles came in a victory that was part of a season-changing sweep of Mars Hill. No one wearing a Catawba uniform had ever hit four doubles in a single game.
“Chance and I came in at Catawba together, and then we had that day against Mars Hill where he hit his fourth double and I finished a cycle — in the same inning,” Setzer said. “It’s a day we’ll never forget.”
Bowden, who still has Southeast Regional play ahead of him, might lead the nation in doubles. Out in South Dakota, Augustana first baseman Alex Fink whacked his 31st double on Friday in a Northern Sun Intercollegiate Conference Tournament game to tie Bowden for the NCAA Division II lead.
“That means a lot when you’re talking about leading the nation in anything,” Bowden said. “There are a lot of good players in Division II.”
Catawba coach Jim Gantt said Bowden, a sturdy right-handed hitter, started his sophomore season slowly.
“Chance’s swing actually can get a little too quick, and it was quick early in the year,” Gantt said. “When he was hitting balls hard, he was pulling them foul. But he put in a lot of work, and he started a little toe-tap that helped his timing. It slowed his bat down, and he started hitting balls to right-center. He reminds me of (late 1990s Catawba slugger) David Trexler. When David started hitting line drives to right-center, you knew he was getting hot.”
Bowden, who enjoyed a 21-game hitting streak this season, has stuck with that right-center approach. And even if his swing uncoils a bit early, the result might be a double to left-center.
“Gap to gap is what the coaches preach,” Bowden said. “Staying in our gap is what we practice. It’s what we work on.”
Catawba hitters have stayed in the gaps. The Indians have banged out 122 doubles to rank eighth in Division II.
“Doubles are important,” Gantt. “They drive in runs. And they put you in scoring position.”
Bowden was plagued by hamstring issues in high school and he had another hamstring scare as a college freshman. This season he’s stayed healthy enough to start all 53 Catawba games. That’s been an essential element in his record-setting performances.
“A lot of injuries can be prevented by putting in the right kind of sprints work in the offseason,” Gantt said. “Chance worked hard. He was prepared to stay healthy.”
Bowden usually bats fifth in the lineup behind Albertson and lefty slugger Malachi Hanes, and he’s benefited from their exceptional seasons. He moves up to cleanup at times against lefties, with Hanes sliding down to fifth.
“We’ve got a whole lineup of good players, a whole team of good players,” Bowden said. “That’s why we’re in the position that we’re in. We’re still playing when most people aren’t.”
While Bowden’s doubles have made national news, his glove is the constant. He’s a lefty thrower — a big advantage at first base — and he’s adept at smoothly scooping balls out of the dirt.
“If our infielders throw it low, Chance takes care of it,” Gantt said. “His glove never slumps.”
Catawba will take a 34-19 record into regional play on May 19 at Lander or Columbus State. That’s a record that’s been accomplished against a challenging schedule.
“Chance has done what he’s done and our guys have done what they’ve done against the toughest schedule we’ve ever had,” Gantt said. “We made three trips to Florida and we went 3-6. That wasn’t the outcome we wanted, but those games helped prepare us to win the conference. Those trips are why we’re still playing.”