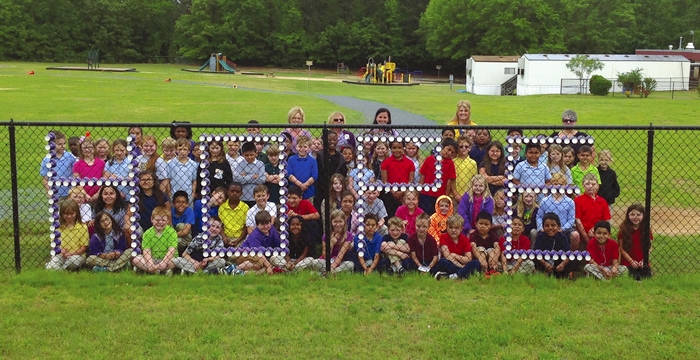 Landis Elementary second grade students are helping to find a cure for cancer. The students did this by selling hand made items and paper cups to display the word “Hope” on the fence at the school. This was a result of learning about an economics unit focusing on producers and consumers. The students raised more than $400 for Relay for Life.

At the April meeting of the Salisbury Woman’s Club, Buddy Farnan shared his knowledge and experience of collecting “High Rollers,” antique and vintage bicycles. Mr. Farnan displayed some bicycles from the 1800s, focusing on the role women have played in the development of biking and women’s biking fashions through the years. The NC Transportation Museum has vintage bikes on display.

In other club news, Barbara Lloyd presented devotions and members made plans for the final meeting of the year in June and for community projects. Hostess Lloyd used yellow flowers and a nature theme for the tables. Trinity Oaks catered the luncheon.

The students of four local piano teachers recently participated in the National Guild of Piano Teachers at the 1st Baptist Church of China Grove.

The adjudicator was Beth Fox of Matthews. Each student is judged according to a standard of excellence, and do not compete with each other. Students receive a membership certificate; a membership pin in bronze, silver or gold – depending on the number of pieces performed; and a report card, which acknowledges progress and encourages musicianship.

These teachers and their students are as follows: Tina Brown (Rockwell) – Gage and Baleigh Trexler, Carys Roberson and Hannah Davis;

Rowan Museum’s current special exhibit, TOUR OF DUTY: A Tribute to Vietnam Veterans will close on Tuesday, May 31. The Museum is not normally open on holidays, but is opening the 30th and 31st to allow citizens one last opportunity to view this unique exhibit which features the latest in museum technology, allowing museum patrons to use their I-pads and smart phones to bring the veterans’ stories to life.

There will be a reception honoring all veterans on Sunday afternoon, May 29 at the Rowan Museum, from 1-4 p.m. It is being hosted by the Elizabeth Maxwell Steele Chapter of the Daughters of the American Revolution. It will be held in the DAR Room on the first floor of the Museum.

Northwest Cabarrus High School is planning a Fall and Spring 50th Anniversary Celebration, for October of 2016 and April of 2017. For any alumni or past staff members and teachers who are interested in helping plan these events or to provide memorabilia to display, a facebook page has been developed at www.facebook.com/nwcabarrus or contact Ms. Browning at 704-788-4111, extension 105.

Commemorating George Washington’s Visit to Rowan County on May 21

The day-long event includes a parade, speeches, dancing, the Windsong Recorder Ensemble, a tea for the ladies, militia demonstrations, stories for children, and more.

• Artifact displays inside the Library

9:45 a.m. – Opening Ceremony at the Gazebo in Bell Tower Park

10:45 a.m. – President George Washington Welcome to Rowan County by Spruce McCay and other historical interpreters at the Gazebo

11 a.m. – President George Washington speaks to the people of Rowan County at the Gazebo